This semester was the first time I really spent time learning to make art on a computer. Whenever I thought of art, I thought about the common mediums such as sculpture or painting and I never thought that something emotive or as meaningful as a painting could come from a digital work (where you can’t see the brushstrokes, or tell how intensely the paintbrush was held). What I have learnt is that just as much meaning, representation and individuality can show through a work made from code by focusing on a different aspect of the piece. While working on my project, I have discovered a new meaning to colour and motion that I had not focused on yet in the other traditional forms of art making that I had done before.

When thinking about a common theme or thread that I would focus on for my conference work I really found myself doubting how I would be able to get that theme across and how I would manage to create something that I found was challenging yet doable. After some thought, I realized that, much like something like drawing, I could focus on a style (or a type of code) which would inevitably link the series of codes I was hoping to create. After talking to Angela, I concluded that I would like to explore creating a video made up of various codes all focusing on noise. I have to be honest, I didn’t exactly create an outline or really think through what I wanted to make; I have treated it more as an experiment, seeing where the modifications of code would take me. Compared to the past, this is something that I would rarely do. I can’t think of many instances in the past when working on an art piece where I would say to myself “oh I’ll just free hand it and see how it turns out”. However, after seeing visiting Vera Molnar’s way of creating art, I realized that sometimes that is the most authentic way to get a point, or at least in the case of my conference project a feeling across.

Logistically speaking, I decided to work from the outside in. I collaborated with my brother on a short instrumental piece (he composes music- for fun!) and worked from there. The piece is quite relaxed and calming, which is what guided me in using such muted colours and creating the type of codes that I did. I tried to link each code to the next in the video by using one of the colours from the previous code as a starting point. This way, I maintained somewhat of a flow throughout the video with hopes of creating a an ambiance that followed and reflected the same feeling as the music. Of course the actual codes and the movement displayed in those noise codes were incredibly important terms of what direction I wanted to take the video in and manipulate how I wanted the viewer to feel when watching it. However, I spent almost an equal amount of time of colour and trying to find the best possible combinations that would fit the idea of the calmness of the video and express this meaning while still maintaining the original expression of the code.

I am still working on this video however, now that I am near the end, I do have a more direct vision of where I want to take it. Even though I started making it by trying to get in the state of mind of the music and not exactly with a clear visual direction, because I was consistent with my approach I feel like the video is getting to be what I subconsciously hoped it would. 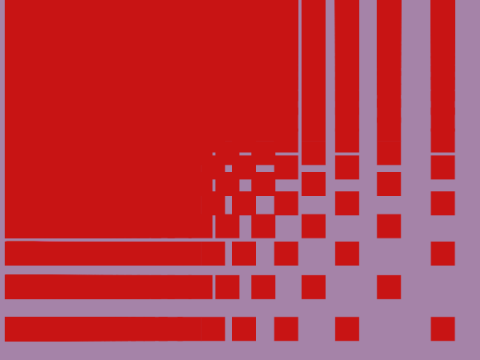