My conference project, titled “OKAYNESS,” has evolved conceptually quite a bit since I started working on it. When I first proposed the project, I had a lot of different ideas about what specifically I wanted to come across in the makeup. I wanted to use makeup as a form from the very beginning, not only because I am interested in the expectations and societal standards attached to the cosmetic industry and the very act of putting on makeup, but also because I am an aspiring makeup artist myself. I think that intimate connection with makeup as an art form and as an identity is part of why this work became so personal and emotional so quickly.

The first time I tried to do a makeup look for this project did not go well at all, but I documented it anyway and got some interesting raw photos. Like a lot of people, I have been fairly overwhelmed this semester, and a lot of that emotion and anxiety about COVID, among other things, came out in a lot of the pictures I took.

I struggle a lot with self doubt and having confidence in my work, but the lock down made me very pessimistic about the world for a long time. I had trouble placing myself in the industry as a makeup artist, and still do, but for a while I was also doubting whether or not there would be an in-person makeup industry left for me to enter. So, while the project originally started as more of a general exploration of gender and expression through makeup, it grew to be highly reflective of my own forms of gender expression as well as my personal relationship with makeup itself.

The first successful makeup look I did for this series, which did take a few tries, was inspired by drag queens and the highly exaggerated forms of femininity they so often embody. I’ve always loved watching drag queens get into their persona as they put on their makeup, hair, and wardrobe. It becomes an internal transformation as well as an external one.

I came out as nonbinary around the same time I started to view and use makeup as an art form rather than a tool to hide imperfections or make myself more presentable for other people. Since the shifts in both my personal identity and my mindset surrounding makeup happened at a similar time, I think that I go into that same sort of drag space when I put on makeup, especially overtly feminine looks like this one.

It was that extravagant performativity of exaggerated gender that I really wanted to explore in this project, but it ended up turning into something slightly different with the second look in the series. Each makeup took about 5 or 6 hours to do, not including the process of actually taking the photos. This was very physically and emotionally taxing, so it was hard to find the motivation to even start a lot of the time.

For this second look, I was inspired by drag, cabaret, and clown styles. I wanted to express a kind of androgyny that exaggerated both male and female connotations. I also deliberately left my skin untouched outside the mask-like shape of the makeup so that some of the vulnerability associated with this look and this project could come through with my acne.

Part of why this look in particular was so difficult is that it required sharp precision in the linework, which takes a long time and becomes compounded by my obsessive perfectionism. I also started working on this makeup at night after a stressful day, so I was not finished with the application or pictures until 4 or 5 am.

Ideally, I would have put together a full costume and background or setting for each look, but because so much energy and time went into just the makeup itself, I could not get a full set up until the last look, which features my kitchen. Again, I took a lot of inspiration from drag, but I wanted to channel a more masculine image, so I looked to drag kings rather than queens.

This look appears to be the least involved makeup of the series, but it actually took about the same amount of time as the other two due to the bolt mustache. Gluing these bolts onto my face was very difficult and very frustrating, as I did not have the correct adhesive products. I ended up using liquid latex, which is fairly thin and takes a while to dry.

The absence of spirit gum or another stronger adhesive also meant that I wasn’t able to include what had originally been the basis for this look. I wanted to use the bottle tabs that were the main part of my evidence in my finding a form project, but they refused to stay stuck to my face. I have no idea why the bolts ended up working out, as they are much heavier and bulkier than bottle tabs, but I do like the effect I achieved in the end.

I decided to use the most emotional and vulnerable picture of this look in my final series. I feel that it captures the part of the essence of this project and what it has come to mean to me. The project ended up dealing with some difficult and personal aspects of my life and mental health, so working on it brought up some of the emotional responses attached to them. I don’t know if I can fully articulate the meanings behind this body of work at all, but hopefully I have summed up this project in a way that at the very least makes sense, and I hope that the images can speak for themselves to some extent. I definitely want to continue adding more images to the series and work on exploring my own expressions of gender performativity, as well as the role I have in the makeup industry as a queer makeup artist. 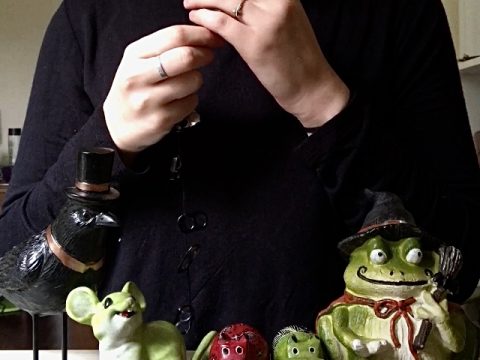