I decided to take a pair of jeans made by the popular streetwear brand Supreme and place found garments on it to create a patchwork style on the jeans. Supreme was founded in 1994 and has been one of the world’s most popular brands since. Clothing brands have taken over the psyche of most teenagers and young adults. Fans of these brands are infatuated with the newest line of clothes they release, the newest sneaker collaborations, the newest anything that they release. The mindless consumer is when you buy without thought, usually on impulse. A lot of people are guilty of it. You peruse the racks of a retail store, you endlessly scroll clothing websites on your computer or phone, at one time, we’ve all found ourselves buying that one thing we know we didn’t need, but we wanted it.

My paranoia is being a mindless consumer who has no self-control. I’ve spent thousands of dollars on brand new clothes. I am certainly guilty of being a very bad mindless consumer. I need to stop buying things that I don’t need and always tell myself I will, but just when I say I’ve bought enough and don’t need anything else, a brand I like comes out with something that catches my eye. If I don’t want to spend the money on that specific brand, the algorithms on social media know of my addiction and interests and present me with a cheaper alternative. Which puts me in a conundrum-do I buy the cheaper alternative that isn’t built to last or spend more money on the original one that initially caught my eye? The “addiction” is an amalgamation of my appreciation for fashion as well as an attempt to cover up underlying insecurities I have about how I look to the rest of the world by trying to put out the best outfit I can possible assemble.

By upcycyling these pants with found material, I felt like I was taking ownership over my addiction and paranoia. This was the first time that I ever sewed after watching YouTube videos and also getting a helping hand from a family friend. I initially wanted the pants to be thrifted but I felt that my paranoia and the sentiment of taking ownership would have been better reflected in using pants from such a popular brand. Before I began sewing, I had taken a picture of the found materials on top of the jeans to show the class during a conference crit. After which my ideas about the project had changed. It went from being a project on the paranoia of fast fashion was a very big contributor to climate change to a project on my paranoia of being a mindless consumer with no self-control.

I’m using a popular brands jean and scribbling out the logo to take ownership over the pants and implementing my artistic vision in the aesthetic of the pants.  The other thing I did was use the font of another popular brand, Chrome Hearts, and ironed-on the word Mindless. The font used by Chrome Hearts is very distinctive. The thing that is far more distinctive though are the patched-on crosses that I would have gotten sued for doing had I decided to put those on my pants. Chrome Hearts produces top-notch quality jeans that sell on secondary markets for prices of up to $10,000+ The reason behind that astronomical number isn’t because of its supposed superior quality, it’s due to the hype surrounding the brand. The jeans are seen almost exclusively on the world’s most popular and well-known celebrities. I’m personally lost on the allure of a pair of jeans with crosses that cost 5 months rent in most cities.

The presentation of the pants during open studios changed. Initially it was going to be a performance art piece where I was going to be walking around downstairs of Heimbold without any pants on asking people “Have ya seen my pants??” That changed last minute because of stage freight, but also, because I noticed that when I had left them hanging up outside of our classroom, people were stopping to look at the pants. They were hung up on a dolly which to me signified a DIY aspect and the way in which I had constructed the pants. They seem to be done by someone with little experience and I wanted that feeling of little to no experience of sewing to be palpable. I decided instead of a performance to be a silent observer for a few minutes and stood in the room of where the pants were installed. I heard one group of people laughing at the font on the back, one person telling a friend who didn’t seem to get the reference “that’s Chrome Hearts font.” Another person noted “It would’ve been amazing if they had put the crosses on the front instead of that fabric.”

Although I think that the ideas of my own personal were not explicitly clear, it was clear to me in the few conversations that I had overheard that people understood there was some sort of commentary and parodic element about the jeans. I feel doing this project, talking to people about it, and finally installing it for people to see has helped me begin get over this peculiar infatuation I have with what other people think about me and the sense of buying clothes for no reason as an outlet to help it. I’m looking forward to my next up cycling project and hope that my passion for fashion is something I can turn into a career. 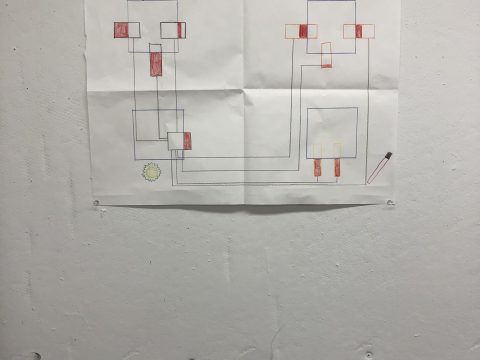 Paranoia as a System: Connecting_The_Dots