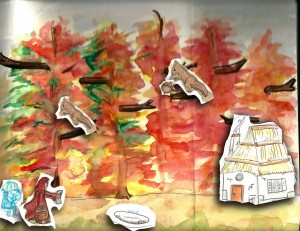 Our game will be made out of the paper prototype that we came up with in class. Because it was a paper prototype, we had created objects beyond our time and ability to code. Thanks to Amy, we were able to come up with a reasonable solution to creating our game. In the game we hope to create, the player (Red Riding Hood) must escort Granny and the magic buns to the cottage before Granny transforms into the Big Bad Wolf.

Our bad guy is a group of rabid squirrels. They exploit the landscape by moving among the forest canopy in a v-shaped pattern. On every third step, they attack the player in an attempt to get one of the buns. In turn, Granny moves one step closer to turning into a wolf, and the environment begins to move closer to night time.

In the code, I will be working on the primarily in the squirrel class by creating their path and collisions. Because we worked so hard on the illustrations of our game, we wanted to incorporate the actual pieces of our prototype within the game. I will also be focusing on the graphic and animated parts of the code by making them image files from the paper prototype small enough to run in the code. I will also be working on the animations of granny’s face changing over time, and the squirrels getting larger. 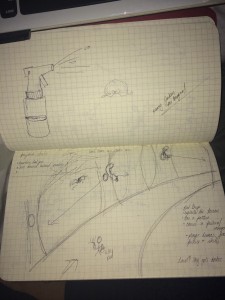 Our group game is developing from our paper prototype. Our first draft of the prototype lacked a few essentials, such as, having many different encounters, and a few other aspects, which we chose to address in our second draft of the prototype.The idea is to make a game with a paper cut out look. I drew our bad guy (squirrels) rabid looking to contrast with the happy looking fall forest environment. The squirrels follow a precise up-down-up pattern. They utilize the environment by hiding in the trees and creating potholes. After drawing the squirrels, I drew Little Red Riding Hood and acorns. Little Red is our good guy and the acorns are used as projectiles between the good and bad guy.

The goal of the squirrel is to collide with Little Red and take her magical hot crossed buns to make them stronger. Each time a bun is taken a new type of encounter happens. As the player begins to lose the squirrels become more powerful (they get big and faster, they throw acorns, and they create potholes) and eventually becomes a mega squirrel. As the bad guy changes Little Red also has new choices available to her, for example when a squirrel throws an acorn she can dodge it then throw it back, or when a pothole is made she can also hide in there herself. The goal for the player is to escort their granny, who is progressively getting sicker with the big bad wolf curse to her home, the more encounters Little Red has with the squirrels the more wolflike she becomes, and if the player fails she becomes the big bad wolf and teams up with the squirrels. We are planning to make the squirrels an array list and Little Red as a class in order to portray our game in code. We plan on having multiple collisions coded for each encounter between the squirrels and Little Red, as well as having a changing environment according to the player’s progress within the game.  In the weeks to come I will be working with the collision for the squirrels with Little Red and the collision with the potholes, in addition to anything else my group requires. 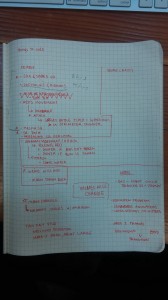 When we decided we wanted to make our paper prototype a reality, I was initially concerned that we wouldn’t be able to keep the awesome ideas we generated when we weren’t worried about being able to actually code the game. I think it was pretty clear to all of us that, while we wanted to maintain the integrity of our game and keep the best ideas, there would also be a lot that we would have to strip down or simplify so that this could be something we could realistically code in a few weeks. So, during our re-design process, I effectively became the Resident Wet Blanket. I did my best to toss out ideas that were far too difficult for relative novices to code, eliminate details that were cool and theoretically possible to code but would ultimately end up taking too much time when considered on top of everything else we’d need to work on, and to simplify core aspects of our game’s narrative and our game’s mechanic so that they would be code-able *and* play-able. The end result of our two-hour design meeting is a game that I believe will be a challenge to code, but is much simpler than our original idea, and in its simplicity even manages to improve upon our original paper prototype while still including all the narrative and design elements that made us love working on this game so much in the first place.

In the coming weeks, I will be working on making sure the environmental changes are timed correctly (particularly granny’s shift from woman to wolf as the sun sets), as well as providing general help and trouble-shooting whenever my fellow group members run into any issues.