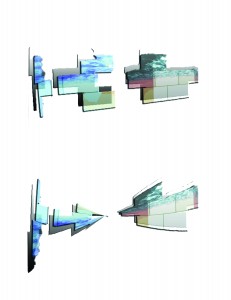 We actively choose to design, decorate, and plan our spaces, making them inherently politicized. Spaces as arenas of visual perception, are direct our vision by the queues and markers which are chosen be set into them, conscious or not of the designer. Spaces are occult to the common observer, the truth behind them is never absolute, and they are filled with areas darkness where our imagination takes control of the emptiness which they provide, and we forever strive to fill.

For as long as humankind has existed they have built, making conscious aesthetic and functional choices in terms of  constructed space. The need for a column, may have sprung from a greed for larger and taller buildings, but also could have simply sprung from the idea of wrapped reeds from the nile being applied in unison to bear the weight of a roofing structure. However, the column did derive its function and its form in unison, allowing it to gain the prestige it has today. As technology has developed and spaces have become more streamlined, uniform, and hidden in their true structural necessity, we have seen a rise in the amount of political weight we attach to them ( Occupy Wall Street, Street Art in General, etc.).

The Greeks, are thought to have taken the technology of the column from the Egyptians, adapting it to fit their structural needs for size and monumentality. Further, the Romans may have adapted the Greek Columns to fit their cultural needs, but certainly they did not serve structural necessity. The Romans, rather chose to apply the architectural stylings of the Greeks in a manner of less permanence, and for good reason, it was not theirs to keep in perpetuity. The Romans, inscribed their social structures, political views, and religious beliefs into their ornament, creating a society constantly stimulated by decoration and ornament.

The reactionary austerity, which permeated out from modern architectural movement ( ie. The Corbusier, International Style, Chicago School, etc.) was not representative of the actual cultures which inhabit them but rather depicted the function of space as a machine, and individuals as fuel for the machine.

When conceptualizing a visual interruption of space, the first thing to consider is the space itself. Heimbold Visual Arts Center, is austere, rigid in its exterior envelope, and seemingly malleable in its internal format (although rarely utilized to its fullest).

Heimbold, in terms of a types of spaces can be thought of as spaces of: transition, production and socializing.(However much of the space seems to utilized for transitions, but this is a digression.) There is a strict and strangely clinical aesthetic statement made by the building. Every studio starts the year empty and sterile, only to be dirtied by the sick and pollutant work of the students. Is this how a visual arts center should make one feel? Is there a need for such stringent spacial segmentation and divides between spaces. It appears that segmentation is  seemingly solely based on that of assigned function rather than interaction of producers and educators. (Maybe even the public??)

In creating a sticker campaign, I saw a need to alter the way in which we perceive linear and stringent spacial assignments. I  drew from Heimbold’s linear formality, I composed an image which would both mimic and oppose the way in which linear space is perceived, focusing on corners and edges rather than flat wall space as points of interaction.

My first installment of my sticker campaign is quite clear in its formal message, the goal was to simply display the inversion and transformation of formal geometric shapes with a transposed version of the same image to be displayed on an opposing corners.

My second step, was to sully or modify the sterility which is Heimbold. This pursuit was driven by a  slightly darker interest; I began to dive deep into the world of online webcam sex shows, watching people feel pleasure through the sterilized lens provided by my retina screen. I gained inspiration and felt their was to be warranted defamation, of the Atrium Cafe’s, heinous yellow wall.

I began to play with the textures and layers of the highly intimate image, which the voyeurs had so boldly displayed online. First, using the entire websites interface as a source of inspiration, drawing out what was organic and what was man made in the image, clearing the spaces I found devoid of meaning, hoping that they would be filled with that putrid yellow wall ,which so negatively impedes on my line of sight, when I am gasping for my first cup of coffee.

For my second image I decided to refine my focus to simply to image of the two people pleasuring themselves in unison. I removed any gendered elements and focused more on the reality of human experience. I chose to extrude the gritty and dark subconscious and conscious emotions forming such an intimate image. I saw the need to remove any irrelevant part as necessary.  Choosing almost at random to change colors and textures to fit the aesthetic goal of decoration through disturbance. 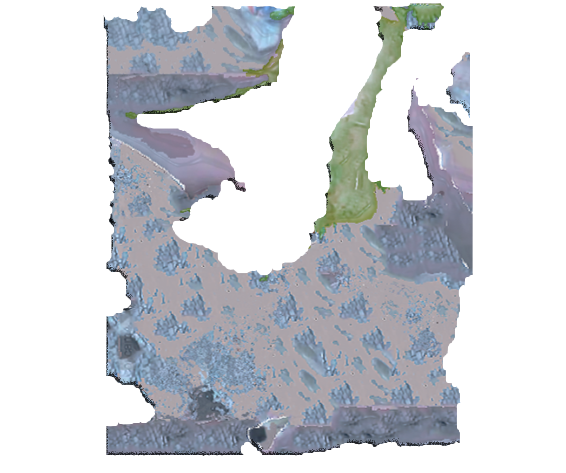 Just as Alexander McQueens infamous show, “Highland Rape”, disturbed and perturbed audiences; the goal was not to emit some grotesque notion or to trigger offense in any person, my goal was simply to bring forward the true grittiness created by a space used for education, creation, thinking, and the physical production of artistic work. No object is sterile, nor are we, nor is anyone.

I want to mention, there is a belief in the field of Urban Studies, that when a city is built there is a parallel city created; it is either literally or metaphorically constructed to serve said  consumer city. Are we as artists residents of the consumer city? or the service city? Do we define the space we occupy? Or do we allow it to define us? Do we defy us based on the space we occupy?

How can decoration, alter the way in which space is perceived, and in turn, how we are perceived in our space?