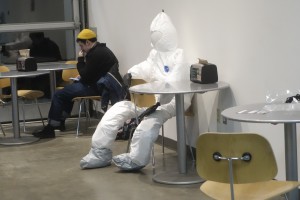 When we began planning the art party, I had no idea what it would look like, or even really what making it would entail. But I dove headfirst into brainstorming it, beginning with the theme, which proved to be a difficult needle to thread. It was important to provide a basis that was simple and broad, but not too broad, so that artists working on the party would have a jumping-off point for installations but still have the freedom of having their own take on the theme. We also needed to make sure that the theme could be communicated easily to attendees. The theme and title we chose, Supernova, ultimately combined the postmodernism and elegance we were going for with a kitschy, space opera vibe. To go with the title, I created a dress code that would further flesh out the world of the party, which we included in the posters. Leading up to the party, we also decided to create a new poster for each day in the week, putting them up at night to preserve the magic of the poster changing. 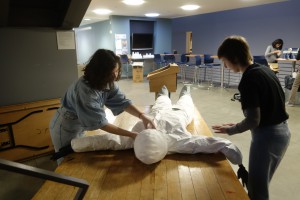 Then there was the question of decoration. Again, it was a question of fitting the theme without being cliche; and of making Heimbold into something completely different from its everyday self. We gelled lights, changing the color of the space, and used mylar to cover a wall upstairs. The reflection of the colored light on the mylar really changed the experience of the space, and over the course of party almost everyone who attended wanted to take a picture in front of the wall. We also made balloon structures and mylar nests of candy, and covered projector tables and food tables in mylar sheeting, which really brought together the visual aesthetic of the party. The decision to make this change overnight also affected the outcome, and added to the mystical element of the party. Not having the work of setup as part of our fiction allowed for a more fun and carefree atmosphere at the party itself. A few semi-contained spaces of fully realized change rather than a half-realized change throughout the whole space proved to be very effective, and the gels and music throughout the building carried the spaces that were less transformed. The harmonious visual aesthetics of the decoration also helped with this – using mostly silver, white, and blue, even with things as simple as candy, connected all of the different pieces around the building. 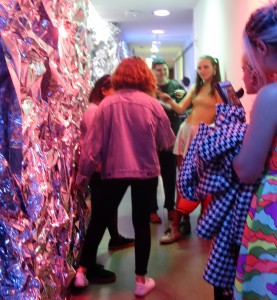 Attendees expressed how much they enjoyed it, and bought into the fiction of the world we had created, dressing up and engaging with interactive installations. By concealing how we created things, and what work had gone into them, the party became a space of wonder and engaged the curiosity of anyone with a desire to enter the space of play. I struggled a lot with time estimation on this project – it was difficult to figure out how long something I had never done before would take, especially when factoring in multiple people working on the project at once. There were a few elements of decoration I had to abandon because of this, and I initially thought that I would be able to experience design and make an individual piece, which ended up not being the case. Because the format of the art party was new to Sarah Lawrence, I think it was also difficult for some participants – both artists and attendees – to fully understand beforehand what the art party would be. We also struggled with creating a large-scale piece in a shared space and the challenges that posed (not being able to use certain rooms, sound bleed, etc), even needing to change the date because of budgeting concerns towards the beginning of the process. Despite these setbacks, people really enjoyed the party, and I was immensely satisfied with the outcome. I learned a lot about creating a piece like this on a larger scale and how to preserve the mysticism in presentation; I also really value the work that I did with the rest of my class as a team. It was really rewarding to see everyone’s individual work and how it all fit together, and I’m truly happy I got to be a part of it. 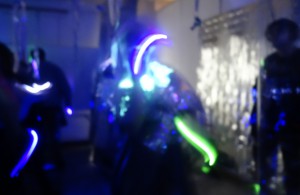