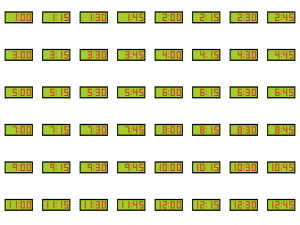 The art featured above is my main character (Emit) and the three types of platforms that I am using currently. More to come.

The concept behind my videogame Once Upon a Time began when we did our exercise for homework about transferring a fairytale into a five point aristotelian narrative. I did not use the fairytale that I adapted for that exercise, but as I found myself thinking of the fairytales as a hole and the manner in which many of them start, with the introduction “Once upon a time”. Being a lover of puns, I pictured a small spec of dust sitting on top of a clock and the clocks hand moving a beat and the spec falling off of the clock and being sprung forward into/with the seemingly absolute flow of time.

My main characters name is Emit. I played with two concepts for Emit. One, although I did not use it, was a raindrop. I based the concept partly on a quote from Blade Runner, “Moments in time are lost like tears in the rain.” This quote encompassed much of what I sought to talk about through my game and I attempted to create my character through this paradigm. While I did, and still do, love the idea of using a rain drop, I found myself feeling like I was forcing the issue and then scrapped the rain drop for the simpler Emit that I had created before the rain drop, who was simply a black spot with a small white eye. The idea of this Emit being that Emit is the center piece of an alarm clock. This introduces the idea that Emit, and therefore the player, is holding together time in a very literal way. In the opening scene/splash art, when the player presses the “Start” button the alarm clock would shake and break, dropping its hand and Emit out from the case that normally holds it together. Once the face is broken, Emit begins to move along the platforms that are all clock themed in some way until either he falls off and dies or ends up destroying the fabric of time itself. It is arguable whether either of these possibilities is failure or success.

As I continued to flush out this idea, the theme of time naturally gelled with the flow contained traditionally within an endless runner video game, both of which seem from the human perspective to be nearly endless if you look at them from end to end. That being said, this being a class that in some ways pushes us to subvert the genre of endless runner, I wanted to create a way in which Once Upon a Time would subvert the genre. The manner in which I imagined going about this came about fairly naturally as well. When I thought about introducing the idea of power ups, speeding up and slowing down time came to mind as the power ups. Thinking a step further, and luckily having been inundated for years with science fiction stories, when one plays with time and manipulates it, the fabric of time begins to break down, so in collecting the power ups that make the game more interesting and fun, the player will break down the game and when a certain number of power ups are collected the game space will be destroyed (Game Over). It seems that the only way to win is to not play.

Overall, I very much enjoy Once Upon a Time on a conceptual level. The themes of the passage of time, inevitability and even fatalism are ones that I find interesting and ruminate on continually in my own life so it has been quite useful to be able to explore them in a detached medium.

Radical Games: Once Upon a Time Post-Mortem