The inspiration of this piece comes from a meme.

It is a picture of a man who has put several tuba parts on various limbs, and is posing like a knight. This meme spawned various tracks which combined the Tuba, then various other instruments-turned-characters, and classic RPG elements for a game that never existed, despite extensive fan-related lore of a dark fantasy game where music is magic. This sparked my interest as it combined both awesome music and video games with classical instruments, and I began to spin my own take on this idea. I wanted to contrast the harsh elements of power, cacophony, and violence seen in many dark fantasies with the simple joy of making music.

I’ve always been fascinated by the hidden kindness, the soft moments of light and connection between people, bridged by the use of art. This scene is the central ‘hub’ in which the main character rests, heals and prepares for the world outside. As such, I wanted to create the idea of a secret, hidden safespace.

I first started by creating the characters most fully formed in my mind: The Tuba Knight, and the Main Character, who I call the Maestro. They were also my first foray into the use of pixel art, which I decided to use because I liked the slightly retro feel it created, bringing into mind classics like Castlevania. Unfortunately, Tuba Knight’s animation gave me a lot of errors and ended up being too large for the computer to handle.

Maestro is the PC character, and I wanted to contrast them with both their surroundings and the other characters, hence their more floaty, soft design and use of blue. They are meant to give off more of an innocent and feminine feel. The PC is the one that brings change to the world, so I wanted to reflect their differences. The PC is also the thing that you, the player can change, using classic WASD keyboard controllers and an e key to interact with the fireplace, turning it off or on, setting up a heartbeat to reverbrate. A little bit of creepiness and the idea of rhythm as a way to connect to my original concept.

The use of “they” is intentional, all of these characters are meant to be genderless, though they may lean towards either masculine or feminine. The computer coding came later. I used a placeholder to experiment with creating player interactions, with different colors as an indicator that the program could tell when the player was interacting with it. For quite a while, the art aspect and the computer aspect were separate lines, and finally combining the two together was an almost magical experience to me. There were a lot of growing pains, switching from the placeholder to the sprites I had created, but the sense of movement and the sense of creating something that felt a little bit alive was great. I want to create even more interactions, creating this scene into a full game. And the work I’ve done here makes me excited to try more. 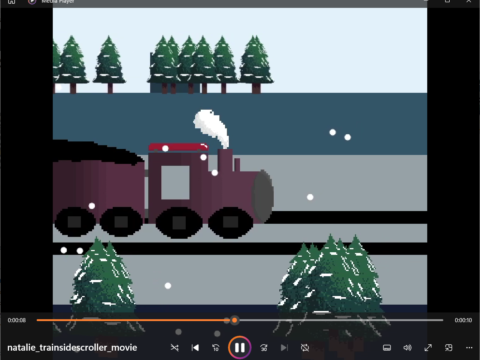 Art From Code: Choo Choo In the Snow