My Sidescroller of a train really helped open a path to get to my goals. I decided early this year I wanted to try and become a game dev, and while I had done some other interactives, this was one of the first that had my art in it: The trees and the train were done as pixel art on my Ipad. I’m proud of how the trees turned out, and how the train moves as well, simple as it is. For a long time, I’ve always loved doing creative work, but I always worried that my skills weren’t enough, that I was reaching for something I could not reach. I blamed myself for not trying hard enough, that I wasn’t as good as others my age. But making this simple scene made me feel proud of my work. The sense of motion, the setting and the ambiance were all created by me. It made me feel that my goal to create a full game wasn’t so out of my reach.

That’s not to say it wasn’t difficult at first, the snow often would only flow from a specific area, rather than coating the entire scene in hovering ‘flakes’. I had to import and learn an entirely new aspect of Processing that I was later able to share with the rest of my class. Not to mention learning how to animate and shade effectively with pixel art. I was even able to add some interactivity, if you press ‘j’, a train whistle starts. All of these things, while very simple in terms of mechanics, were significant to me, I felt like I succeeded. Using pixel art allowed me to focus on colors and form, and less about lots of little details. This scene also represents my second foray into this form of art, and my first time implementing it into something people would actually be able to see and interact with. I had an idea in my head, inspired by the train and the snow in Murder on the Orient Express, and was able to represent the image I had in my head to a satisfactory degree.

I feel hopeful now, I’m taking the skills I’ve learnt here to make a much more complicated scene based on a game concept I’ve had in my mind for a long time. 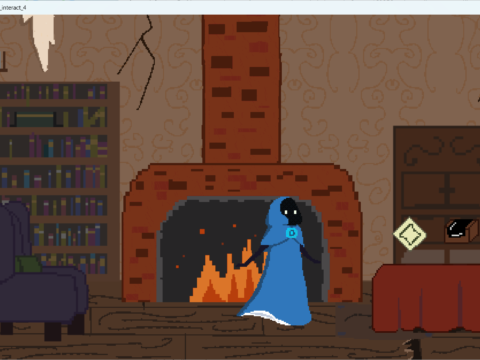 Art From Code: Hearth and Heart