This project aims to generate a dreamscape composed of a compilation of images found from various online sources and some from my own camera roll. This cross over between online scavenging and personal sources meshes together elements that are both real and unreal in my world and unites them through common visual feeling and aesthetic goal. In the work, cut-outs of 19th century actresses and other anonymous women captured in early black-and-white photos sit alongside or on top of a sort of digitally crafted stage. The background is composed of textural elements pulled from design magazines, fabric works by Eva Hesse, and pictures of the sky. While much of the focus is on the added collage elements and the ways they work in relation to each other, the project emphasizes the un-reality of this world by maintaining hints of a digital ‘non-space’ as a black background generated by processing peaks through the tableau. Some elements slide across the digital canvas, some are overlain with code generated shapes, and some stand still in their positions to give structure to the composition. The lack of uniformity in movement and placement seeks to displace focus and require a deeper visual analysis of each aspect.

This work first came about as a way to explore my interest in experimenting with processing as a tool to activate collage in a new way for me. As I began work on the final version, I knew that I wanted to create a landscape that was a version of my personal idyll, which means a dream-like landscape featuring striking women and vintage glamor with plenty of lush color and texture. More than creating an uncomplicated scene composed of my personal aesthetic tastes, it was important for me to play into the potential for darker feeling akin to the confusion and disorientation of a dream. The ‘darker’ feeling is located in the elements like the trailing rot of red mushrooms, the amorphous and unidentifiable pearlescent sludge, or the strangely human faces of the central floating head-beads. I was inspired to create a project that took time to understand and evoked conflicting feelings as it is viewed and as it cycles through the coded functions.

I began by compiling images that spoke to me and felt like elements that would be relevant to my vision of this dream world. Initially, my idea for the project revolved around recreating the painting Judith Slaying Holofernes by Artemisia Gentileschi in a sort of digitized Frankenstein-esque way. However, as I began to cobble together my reinterpretation and receive feedback, I found that my own creative drive was limited with this specific prompt and that my motivation did not mesh with the message and intention of the painting. Maintaining a similar aesthetic and pulling from the images I had already collected for my previous idea, I pivoted into creating the dreamscape that I had already naturally gravitated towards constructing. I continued to collect images that felt relevant to my vision for the project and began putting them into the almost-black rectangle I created in processing. When receiving critique, others saw the way I arranged my scene as something akin to a stage at a theater, which was an unconscious choice but one that I attempted to lean into once it was brought to my attention. I added curtains and fabric and moved the figural elements towards the bottom, essentially placing them on their stage. To avoid being too literal about the theater, I added elements from the natural environment; mushrooms, a skyline, a billboard. Once I had a general layout I began to add motion by having certain characters slide across the stage and peak between each other, or have the red hands sliding downwards in a sinister allusion to blood red hand prints. I also added red circling ‘stars’ using processing to bring coding back to the forefront. The process of finishing this piece involved continual rearrangement and playing with movement.

This project captures elements and feelings I find in dreams, for better or for worse. I often have nightmares involving being lost or confronted with inhuman beings, which is what I sought to confront my audience with as they take in this work. While a great deal of this work is aimed at curating an aesthetic that I find attractive and intriguing, it also has a deeper meaning connected to my internal world, my predilection for mysticism, and my curiosity about good, evil, and the connotative emotional value of certain images. 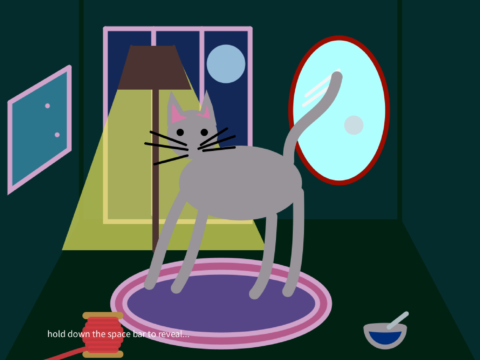