Georg Nees is a widely recognised artist for his work in generative art. From Gravel to his Ecke line, these pieces instilled into viewers something they wanted, was it the orderly lines of computer art, or was it the creative, sometimes bizarre features of human-made art. Something Nees had in his pieces was randomness. This allowed for his computer generated pieces to become more organic in ways, to deviate from the rigid lines of the stigma towards computer generated art. When incorporated into his art, Nees’s lines can be seen gradually shifting in his Gravel pieces or following a random pattern in his Ecke series. However, structure can still be seen in the aforementioned pieces as they follow a grid-like pattern. These aspects are what gives Nees his signature “look” and lead to him being so respected.

My first piece is a constantly changing cluster of lines, shaped to be a ball. I wanted to make my piece seem random, yet retain a sort of structure like Nees does. In doing so, I planned for the general shape of the ball to be the structural part of the piece and the lines constantly changing to be the random part. I achieved this by setting a “border” for the lines and connected two points randomly within the border. In doing so, I was able to create a sort of gradual dispersion as the lines would become less dense around the edges and more dense in the center, creating a sort of organic feel.

My second piece is inspired by the Fibonacci sequence where the dots are arranged into a spiral modeled by the Fibonacci sequence. They spin in the direction and speed dependent on the mouse location and velocity, as I was able to incorporate PVector into the piece that controls the spin speed and direction of the dots. This formed very interesting patterns that I found fascinating. The Fibonacci sequence is seen a lot in the natural world, from seashells to flowers, this pattern is recognizable almost anywhere in the world so when I was able to model it in a computer program I felt very satisfied. 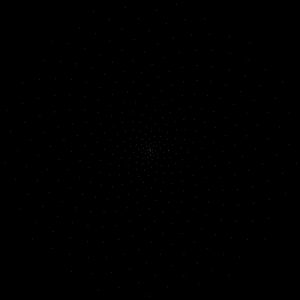 My last piece is of overlapping spheres that create a pattern. I wanted to model it off how a atom is graphically represented, with rings floating around a center. Unfortunately I was not able to model the center as well and left a hole, to contribute to negative space. The shape and spread of the ellipses are once again controlled by movement of the mouse and they create these shapes. Again, the movement of the mouse basically replaces the randomness of the work and allows for a gradually changing piece, similar to Nees yet more dynamic and active then what was achievable using the technology and techniques of his time. 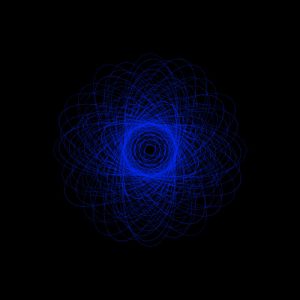