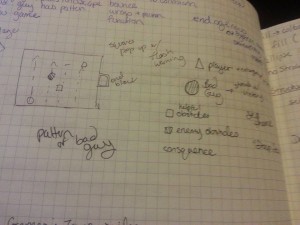 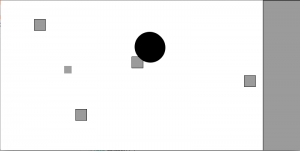 In the first draft, I created the enemy path. Because our terrain was the ocean, I felt the shark would have considerable range over the landscape and created a path that consisted of three circles wrapping around the screen. As an enemy, I wanted him to be harder to sneak past as the player got closer to the end zone, so the circles moved faster closer to the endzone. I was going to connect the three paths so that it would be one path but I didn’t have the knowledge or ability to do so when I began coding. With the help of my group, we realized that the weaving of the middle path seemed the most natural for the shark, and presented enough of a challenge without having to add the other two paths, so we presented this draft of the game with the shark using only the code for the middle path. 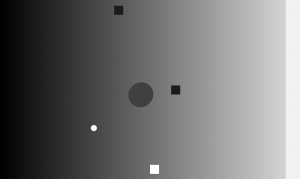 For our second draft, our change list consisted of making the motion of the shark wider, adding movement to the good and bad squares, giving the player more visual hints as to what the object of the game was, and introducing ending animations.  We also needed to incorporate the new restriction that the player gained a choice from a bad thing (failure). We decided that the player would have three chances to learn from his/her mistake. Each time the player hit the shark, the shark would take a bite. Three bites, and the player was dead. 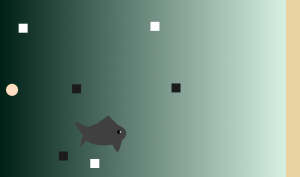 Our third draft and final draft consisted of added more realistic avatars (such as the new shark avatar, colors for the ocean and sand. Many of the glitches with the squares were fixed, and the  code was adjusted to include an array list.