The first drawing machine I made is a scissor lift-style mechanism. In theory it can only create two straight parallel lines, however, the bars are not lined up perfectly which can cause the lines to curve and shake a bit. When I first made this with Andrea, neither of us had any idea what we were doing. We just played around until we got a mechanism that somewhat resembled a scissor lift. Our biggest problem was that the machine did not have enough control over the drawing. However, after we added the bar in between the two followers the motion was a lot more restricted in a way that gave the machine more control over the drawing than the artist. 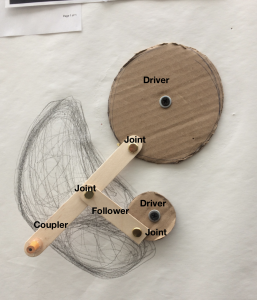 When planning for my second machine I knew that I wanted to try to incorporate circles somehow but that was all I had in mind. After researching straight line mechanisms online I found a design that looked interesting and I thought I would try to recreate a similar mechanism in class. When I actually started making the mechanism I realized how much more complicated it was than I originally imagined. I ended up making a design that looks almost identical to my original plan but functions a little differently.

I’ve enjoyed using machines as a medium so far. It has forced me to try to incorporate elements into my art that I have never tried experimenting with before. It forced me to focus less on perfection and more on experimentation. Eventually, I learned that my machine was never going to come out exactly as I had planned and I needed to learn to be okay with that and just see where the project was going to go. I also needed to learn to give up the control I was used to having when drawing. My drawings were not going to look as though I drew them with a pencil, but that was the point. Why create a drawing machine at all if it did not force me to create something I would not have been able to create on my own?

One thing I found particularly interesting was that both Andreas Broeckmann and Filippo Tommaso Marinetti brought up the topic of feminism in Machine Art in the Twentieth Century and “Manifesto of Futurism”, respectively. Broeckmann states that “women are often identified with machines, while such machines are conceived and built by men”. He also mentions Donna Haraway’s “A Cyborg Manifesto” in which she does not deny the correlation between women and machines, but rather she embraces it. However, while Paul Haviland implies in “We Are Living in the Age of the Machine” that “‘the machine is like a woman,’ Haraway reverses this claim and says, ‘woman is like a machine.’”

From what I understand, the Futurists had a very different idea of women and machines. While some artists may have compared women to machines in a rather objectifying way, I believe the Futurists would have seen that more as an insult to the machine than to women. They idolized the machine, and with it, similar ideas of destruction, war, and violence. The machine was a means to that destruction, war, and violence whereas women were viewed as weak, fragile, and incompetent. The two are inherently contradictory. I doubt the Futurists would be comparing the two.

I am excited to start my new project. I do not yet have a plan for what I will make, but so far I have enjoyed experimenting and seeing where that takes me.