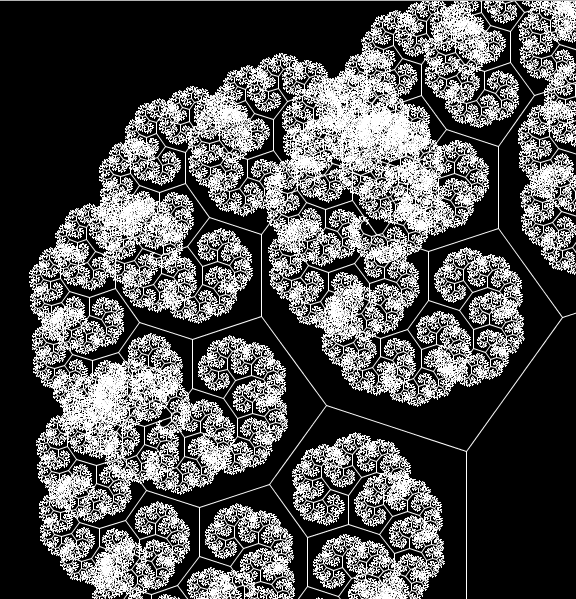 Nature is unfathomable beyond our imagination.

In my humble attempt to re-create natural phenomenons, I gained a deeper awe of its sheer intricacy. One of the most vital rewards I gained from my project was, a more profound grasp of the ideas of fractals and recursions.

Fractals are beautiful. They are also ubiquitous in the vastness of nature.

What exactly is a fractal and how is it formed? This is a question that, quite embarrassingly, took me a whole month to get the gist of. A fractal is a never ending self-similar shape. Nature is random at its root, but upon closer examination, astonishingly self-similar. This is one of the reasons why fractals can simulate nature.

The process of creating a fractal can be understood as generating a pattern, then from the end-point generate another identical pattern on a smaller scale – rinse and repeat. This delightful fractal-formation process is also called recursion.

The natural world cannot be defined by mathematics no matter the complexity of the combination of functions we apply. Nevertheless, recursion twists the plot.

From a computing standpoint, recursion is extremely efficient. From the code-writing perspective, recursive functions are elegant, and nine times out of ten more succinct. Additionally,  recursion represents a heuristic we have practiced all semester long – trusting the computer. Even when I didn’t understand how recursion worked its magic, I was amused by the patterns it produced.

Within Processing the construction of a recursive pattern is a little different. On top of a for-loop to make recursion happen, there needs to be an if-statement to exit out of the loop. Unlike nature, computer simulation has its limit and can’t handle an infinite loop. I learnt it the hard way by crashing the program numerous times on separate occasions, and getting super confused.

In the subsequent weeks, I messed around with the code following Molnar’s gradualism (changing one parameter at a time) method. After a ton of playing around, I slowly understood which variable was having precisely what effect . The magic of recursion progressively unfolded itself. I was able to trace the lines’ development on a scratch paper. For instance: Turn right, extend ¾ of its original length, turn left 235 degrees, extend ⅗ of its former self. Repeat the process with the new branch… Follow the instructions identically until told otherwise… Finish the image on a stopping condition.

There was a lot of random, surprising noise generated with each slight change. For some reasons however, I was not particularly impressed by any individual sketch.

I went through lots of trial and error (as well as frustrations of course), before I encountered ‘the chosen one’ – a shape I found intriguing enough by itself, however with an icing on the cake: it is self-connectable. Inspired by Angela’s suggestion to print out all the sketches I produced, I suddenly realized that this shape can serve as an excellent building block to form a much larger organic mechanism.

This possibility brought me out of the mental slump and shot me with a dosage of optimism. I was given the rare opportunity to think three-dimensionally, to think in a sculptural sense, to bring my code off the computer into reality, into physical space. 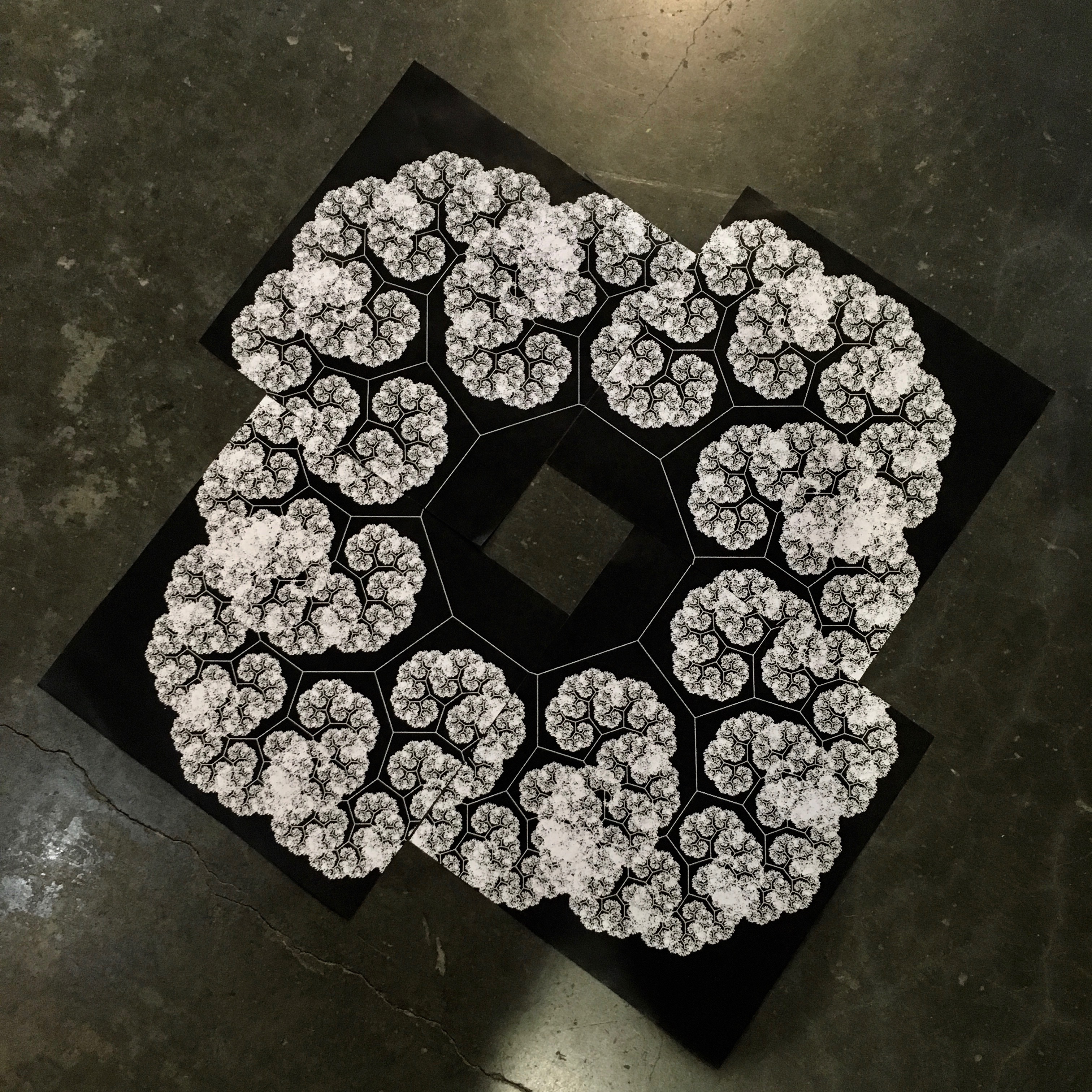 At first I was unsure about where to install. After a discussion with Angela, we decided “Why not try the staircase in Heimbold?”. I thought that would look quite unique. Nevertheless, I was still clueless as to how to put it together. Much to my delight, my anxiety faded once I started laying the shapes on the floor, rotating them around and connecting them together like puzzle pieces.

The installation became even more fun when I began taping the various patterns onto the staircase. It felt like I was bringing programming art alive, into the natural world.

Instead of extending the formation straight up the staircase like a tree,  I experimented with tilting the initial pieces towards the wall. I was extra attentive taping down the first few patterns, since I was aware of the butterfly effect they potentially were capable of. Additionally, I placed them in a parallel fashion, and adjusted the distance so that visually they would stay connected despite physically separated by a skipping stair. 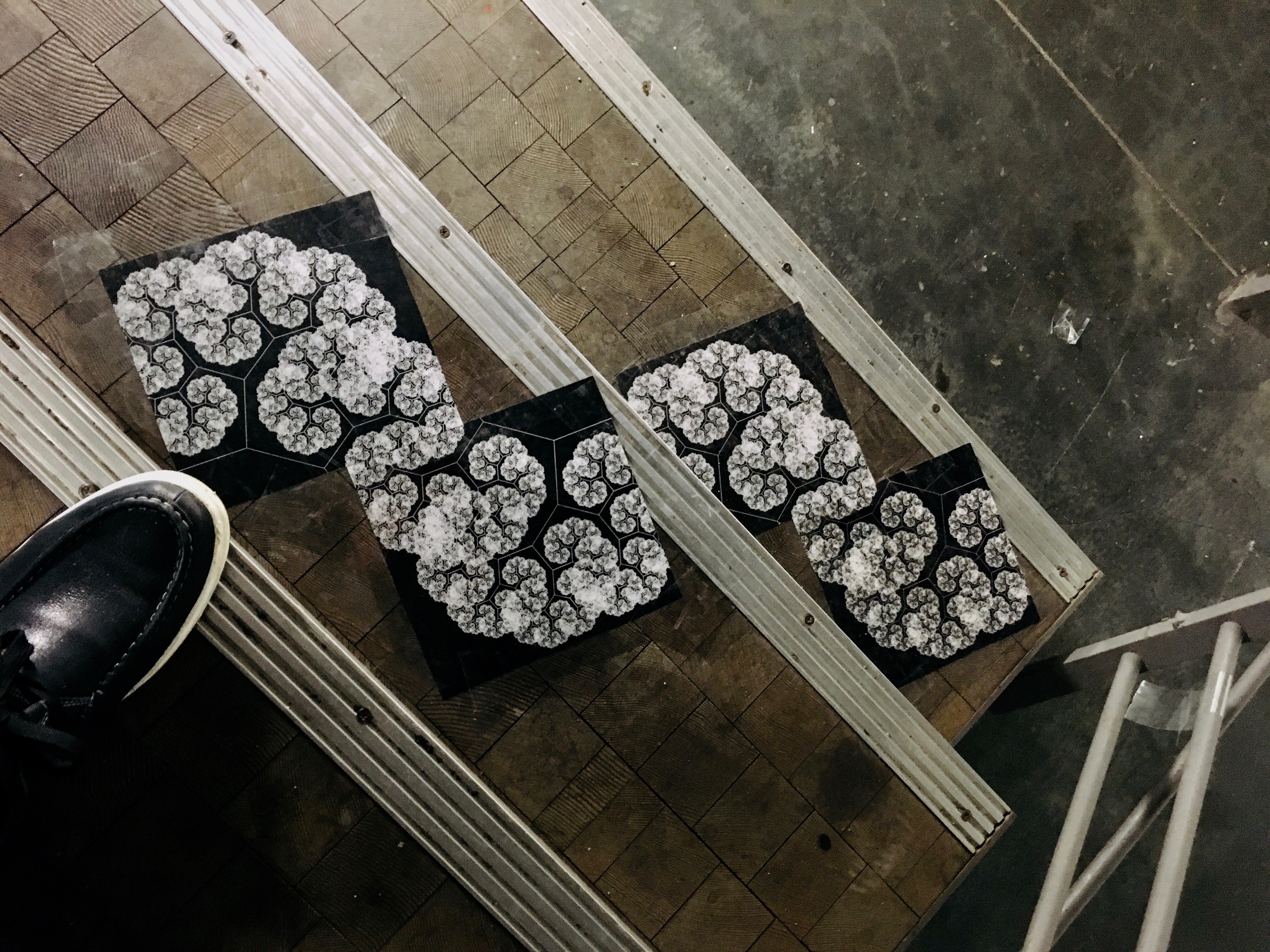 I spread out the installation process over a ten days’ span, to symbolize the gradual growth of natural organisms. My perception of this climbing fractal-organism also evolved over time – it was a tree, then it was corals, then it was a kite…  I will leave the interpretation to the audience themselves.

I don’t have a picture of the finished product, because I felt none of the photographs taken from a single angle can capture the holistic affect of this piece.

The rest of my work were tinkerings on the screen.

My second piece is a manically swinging tree, which also mimics lightening held down by a string. The sensation one experiences looking at this piece alters with the frame-rate as much as with other parameters. 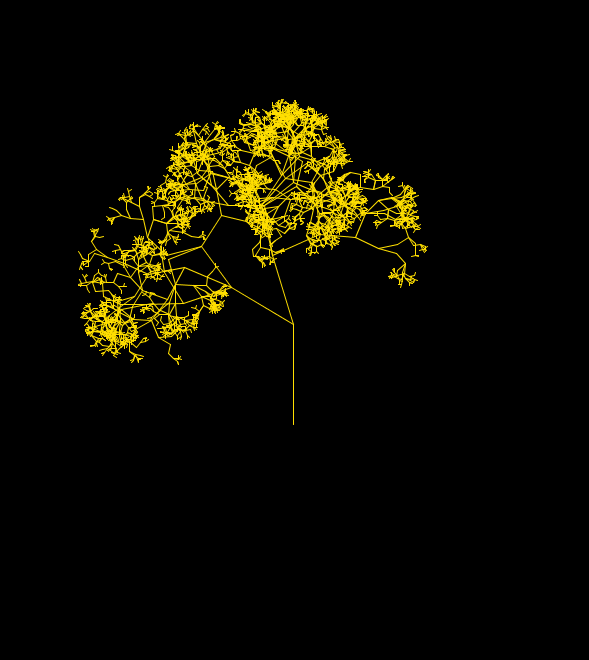 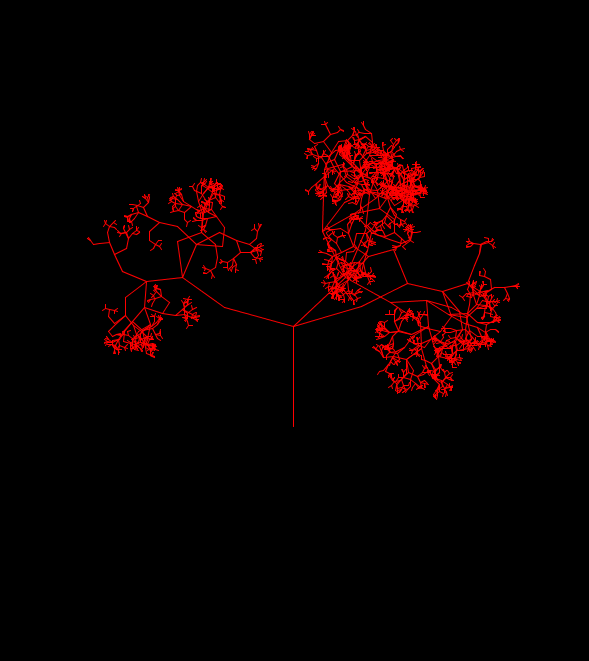 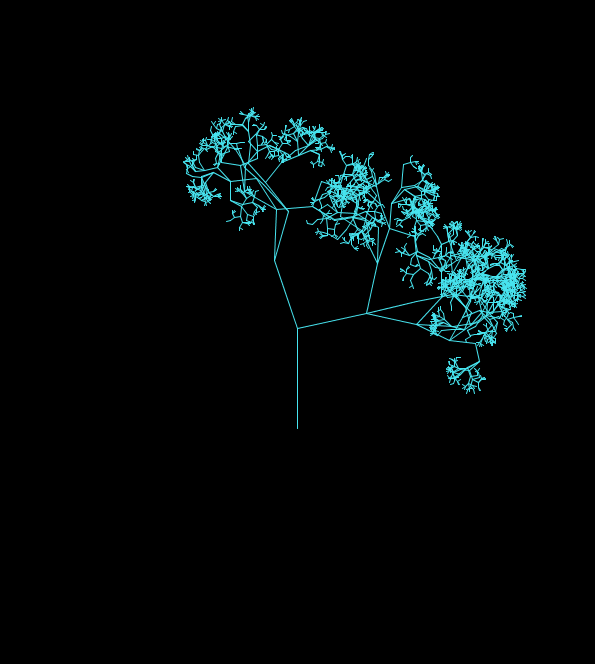 I was disappointed when I came upon how the screenshots came out. I realized that screenshots cannot capture the crazed movements, the carefree sense of motion that were the essence of this sketch. Once the animation speed exceeds a certain limit, the screen creates a visual-affect that is indescribable by the separate, moment by moment images.

My third piece is relatively stable in contrast, except for the blinking neon effect. 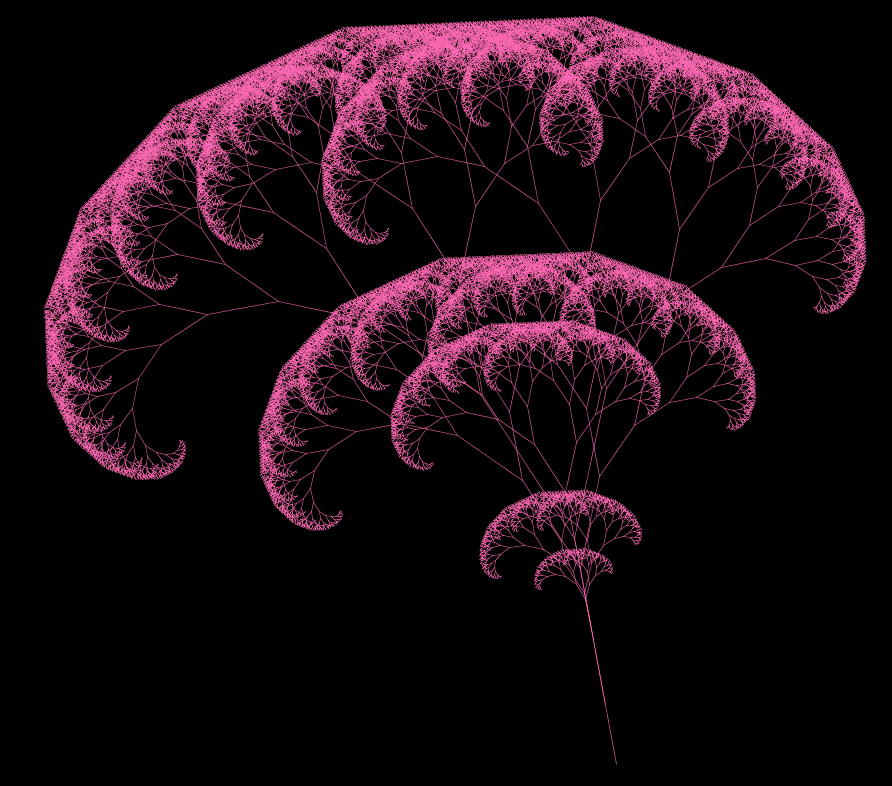 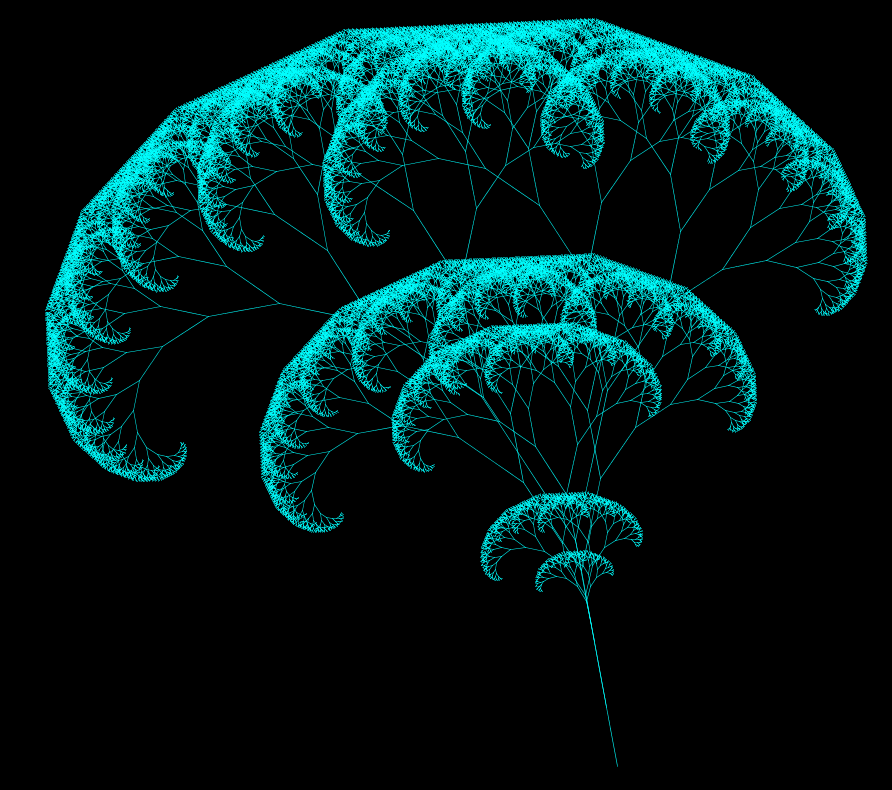 This piece encompasses the idea of utilizing the same object (or pattern) multiple times, but with a different size and at a distinct position. I applied some of my perceptive psychology skills to optimize the aesthetic effect I intended. The end product exceeded my humble expectation.

The most inspiring thing I learned from this project was embedded in art yet beyond art. The spirit of  ‘sticking to it’ usually always yields to unexpected outcomes. Art is full of mysteries to uncover – it simply takes a dose of patience, a dose of curiosity and a dose of persistence. 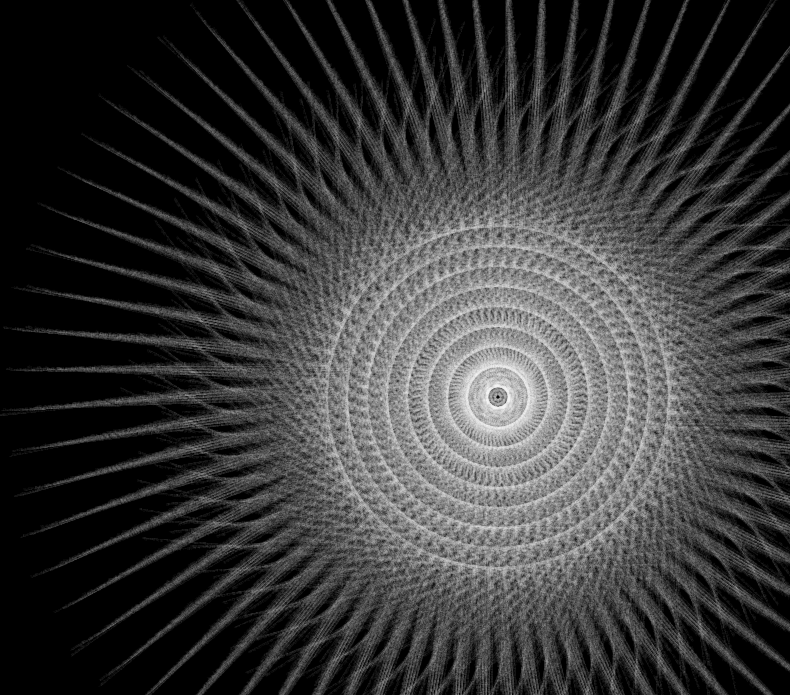 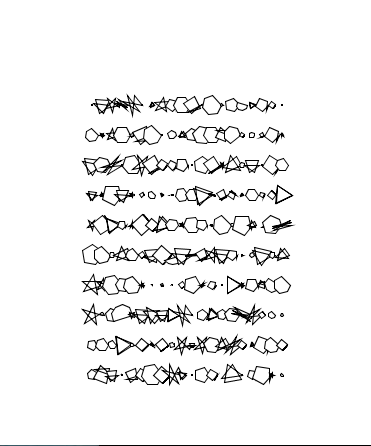