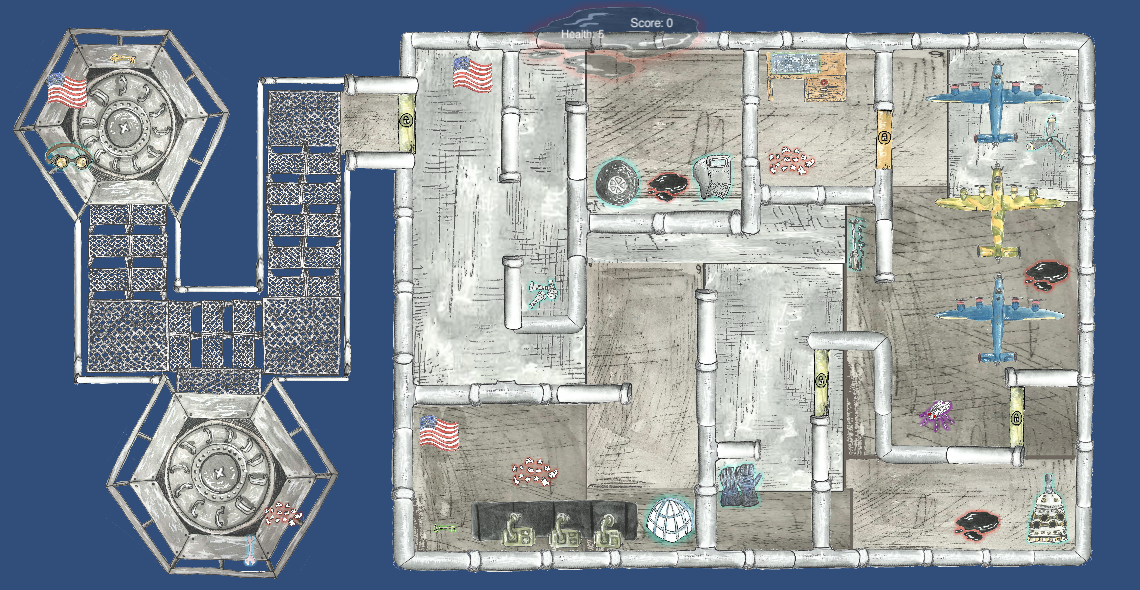 This is my conference expansion of our first collection tutorial mod. While in my last post I concluded that I was going to be done with this game, I had put in too much work already to be satisfied with such a mechanically simple product.

One of the main changes I enacted was attaching a camera follow script to the Main Camera, where I then designated the player as the “object to follow.” This simple script completely changes the player experience, taking this from a game with the full map visible and motive/replay value minimal, to a genuinely pleasant exploration of space with visual and audio payoff.

Another element which crucially altered gameplay was the successful implementation of locked doors and keys. It took a little while to figure out how I could code this. There is an integer “keycount” defined in the code for the locked door, which increases from 0 when the player collides with the door’s key. The door unlocking/disappearing is conditional on the keycount being greater than zero, AND the collision of the player with the door. Instead of an unlocking sound, I created a sort of breaking-down-the-door thump, which nods to the sort of atypical, spy-like connotation of the fly sprite for the avatar.

There are two keys in the game, with their own color narratives. The green one unlocks three separate doors, one of which leads to the area where the gold key can be found. The other two green doors are at both entrances to locked passage close to your spawn point. The gold key unlocks another room all the way across the map. I carefully chose the key and lock placement to ensure that the player can’t move through the map in a linear fashion and complete the game, but must revisit areas.

I also deliberately made the keys small enough that they are hard, but not impossible, to see. This choice goes along with my other decisions establishing a rather fast speed of player movement and slight camera lag, plus obstacle placement; I want to create a climate of mandated haste, but the path to winning mandates that you slow down, be cautious, and pay close attention to what’s going on, despite the environment pushing you to rush around. 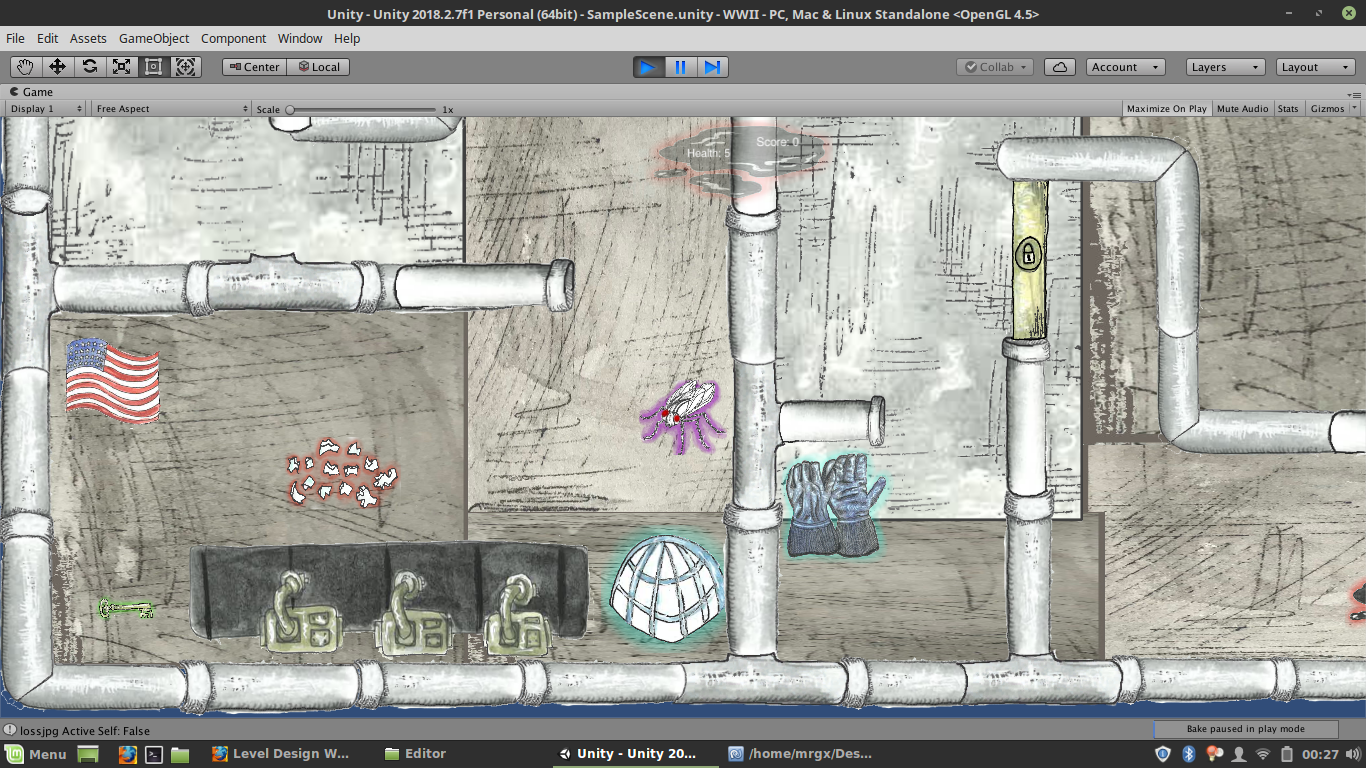 Player in view of both a key and one of its corresponding doors; also, shows new camera scale.

Otherwise, I made many small tweaks to give the game overall coherence and enjoyability. One such adjustment was the introduction of translucent halos around collectible items and damaging obstacles, creating an aqua/red color narrative which helps guide the player through. 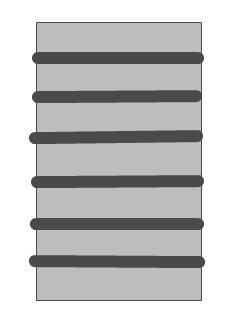 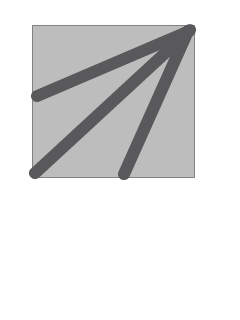 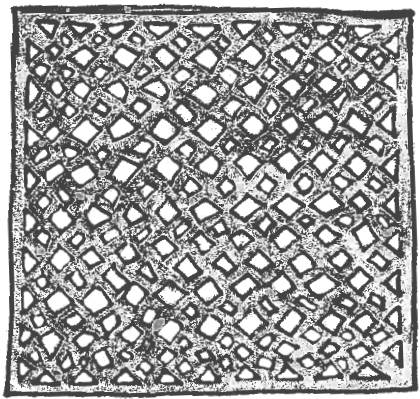 The first version of this game used a very basic digital slab of grey with darker grey lines through it as a placeholder for stairs. I much prefer the final mesh design, though it was a pain to make all those gaps transparent in the .png! These step/platform sprites ended up being some of my favorite visuals of the entire game.

Early in the modding process I made what I thought of as “glass machine” noise to attach to the assembly line sprite located in the bottom right corner of the map, as the item served no non-decorative purpose. I ended up getting caught up in collection/obstacle-specific sounds and didn’t create sounds for different zones, though the game would stand to benefit from it. The glass machine noise was repurposed as background music, but in crit it was pointed out that the wind chime glass-y effect was out of place and confusingly modern for this factory setting. I removed that effect and ramped up the other parts of the original track, with a louder staccato pounding sound pitted against decreasingly loud but more continuous beats. This makes an overall sort of clamorous stomping with a stressful vibe, while the everpresent overlay of the louder & slower, and quieter & faster/more numerous elements creates an illusion that activity is occurring both where the character is, and further away. 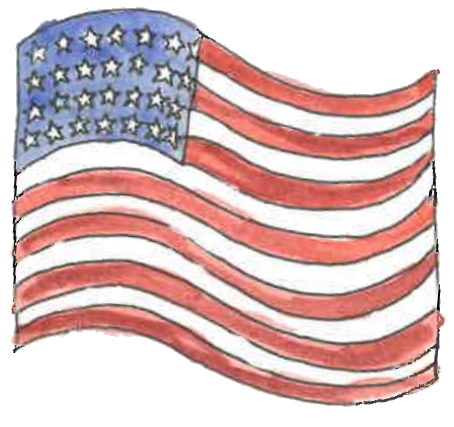 I also got my final obstacle to be operational – there are now American flags which play a rather jarring excerpt of the national anthem when you run into them. I purposefully made it so that the flags don’t disappear when you’ve hit them once, so there’s the potential for a hellscape of multiple overlaid anthems. I appreciate the implicit negativity, though I went back and forth on whether or not it should cause damage, so avoided the red outline – my preference was for it to freeze the character, but I never got it to unfreeze at the conclusion of the audioclip.

I created other specific sound effects for each obstacle, using the wind chime effect for the shattered glass while deploying a sort of bubbly cauldron-type drone for the oil slick. To create consistency and reinforce negativity, these distinguishing features of obstacle tracks are accompanied by the same thump and negative sound, the latter of which is somewhat akin to the noise an OS might make when you try to perform an impossible action. The aqua-backed collectible items give a sort of euphoric heavenly sound when you run into them, and the keys have a sound which reminds me of opening a treasure chest.

One weaker point of this game is the health/scoring UI. In the earliest version, many playtesters didn’t even notice the light bar and simple text giving the health and score readouts. I tried to counteract this by using the oilslick image as a background and having the transparent sprite overlap with the actual game interface. Still, some of my playtesters didn’t take particular notice of it, and initially didn’t realize the red items were bad as they found the funky sounds rewarding. 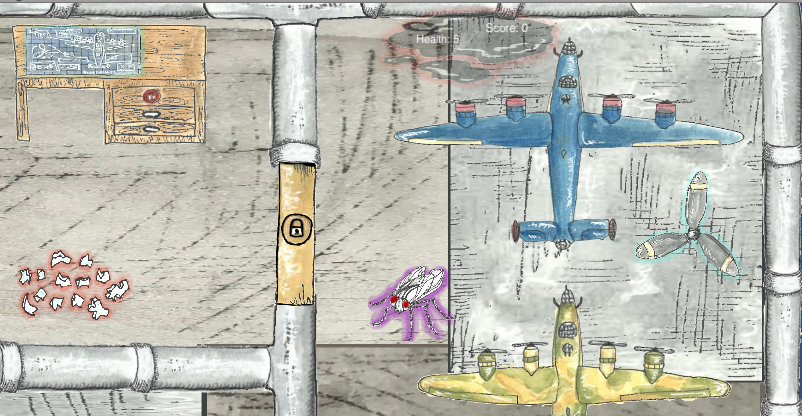 Overall, I’m really happy with how this final (for now!) build came out. Costikyan’s ideas on zones and bounds were definitely on my mind from the very initial stages of drafting sprites till the very end. However, my early efforts were disproportionately spent on visuals, which did actively restrain and direct the character and established world metaphor, but could not in and of themselves create a compelling gameplay experience. My original, ultimate vision for items creating exciting zones and bounds was definitely actualized in this game through the modification of the camera to follow the player and the use of keys/locked doors. 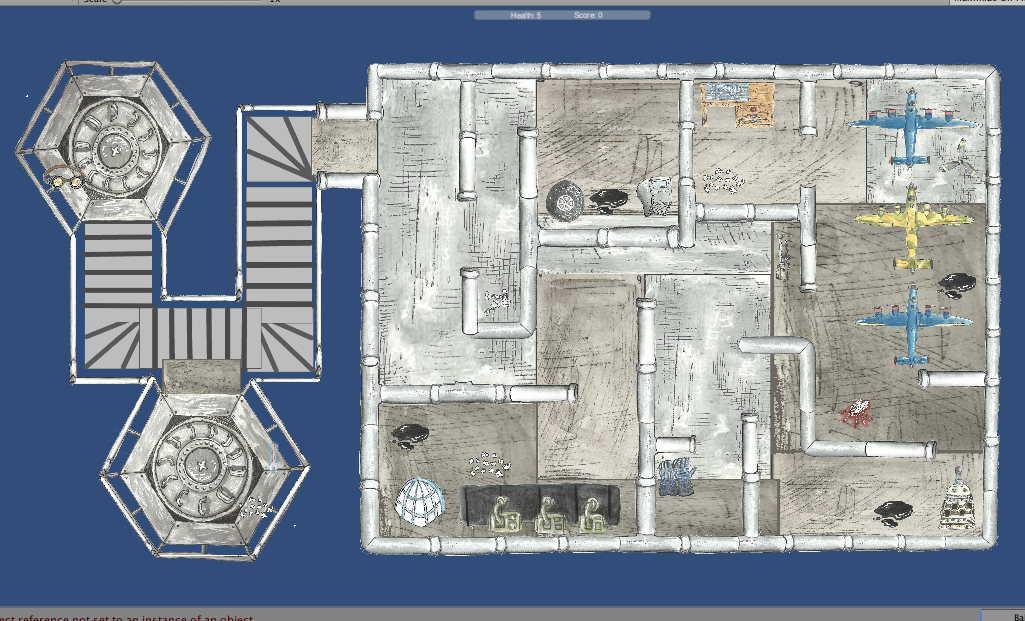