I tend to be wary of adding another screen to a world already saturated with screens. I assume a certain level of difficulty in making that something positive because so often our experience of screens is negative. Before reading ‘The Societal Potential of Urban Screens’ My perception of urban screens was largely connected to an image of times square. Times square is not a human space. By that I mean it is overwhelming and somewhat displeasing on a sensory level. Further it feels like an imposition, a one way transfer of images and ideas, not a dialogue. I believe that for something to be a positive contribution to a space it has to reflect an aspect of the community, connect communities or individuals, or inspire them. This rarely occurs in commercial spaces with screens like times square. 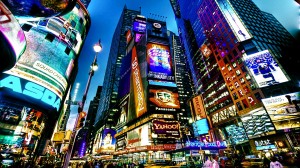 Struppek’s article was particularly eye opening for me because it gave examples of urban screen projects that successfully fulfilled my definition of positive contributions. Struppek describes urban screens that are populist, that reflect the thoughts and designs of individuals who otherwise are unrepresented. Also, and most interesting to me, she writes about the interactive elements of many of these urban screens. Particularly fun was the video screen installation which allowed interaction between people waiting at bus stops.
I think that interactive elements are an important aspect of reclaiming space as public rather than private.
So how does our text project measure up against this?
It is not interactive which I consider to be a limitation. However, it is a means of taking back and reframing space through adressing our questions about it. Further, we do represent a sample of this community and as students rather than administrators, we are changing and challenging who controls the visual space. Ultimately I do think that our class is making a positive intervention with our urban screen.