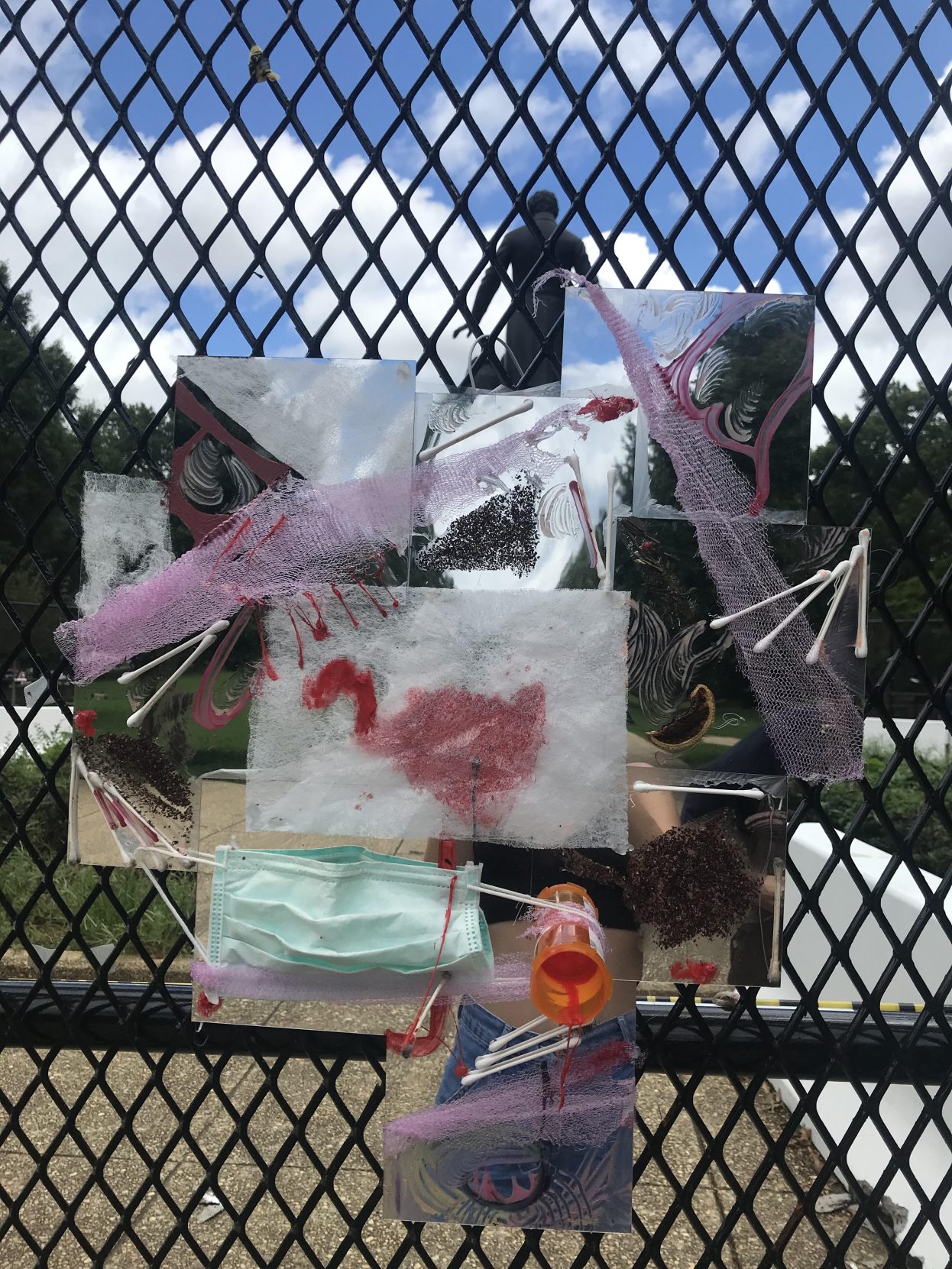 The word that initially caught my attention when beginning this project was “obsession”. As I reflected on obsessions and obsessive behaviors of mine, I realized that even as a little girl, I put a lot of thought and effort into my appearance. I see no problem with caring and taking pride in one’s own appearance – ideally, this should always be the case for everyone. It is only when it manifests as an obsession is when it can turn ugly. My installation was inspired by my vice of being self-obsessed to an extreme. In regards to trash, I suddenly became hyper aware of all of the waste I have produced and continue to produce due to my obsession with beauty and perfection. Initially, I was only planning to create something using a mirror as the canvas, in order to express this idea.

As I was waiting for my mirrors to arrive, I noticed that I had developed a new habit of reading the newspaper, leaving it on the floor in my room and, for a couple of days after that, out of laziness, using the newspaper as a rug. One day my “rug” would have photos of police beating protestors. The next day, it would have photos of children in cages. This does not stop me from stepping on these photos as I would reach for my mascara. This small action seemed to mirror the attitudes that I think many of us have subconsciously accumulated throughout the past four years in this country. Although outrageous events that demand our attention occur every single day, most of us end up too preoccupied with our lives to give the proper amount of attention to these things – even more so after four years of being habituated to the insanity and hate that Trump has magnified in awful ways. This led me to do make a rug composed of various newspaper pieces. I positioned this rug directly in front of the mirror, so that it must be stepped on in order to look into the mirror.

On the mirror, I used q-tips, dryer sheets, a loofah, lip-gloss, lipstick, eyeshadow, tea, a pill bottle and a mask. When choosing and placing my materials, I drew inspiration from Anselm Kiefer. A lot of Kiefer’s art vaguely resembles a painting, until getting close and noticing the three-dimensional objects, such as sand and hair, that protrude out towards the viewer. My original idea was to assemble the materials along the perimeter of the mirrors. I ended up covering the center of the mirror with layers of dryer sheets, so that the viewer would be forced to shift their focus from themselves to the trash. The viewer cannot look at themselves without looking at the trash, just as they cannot look at the trash without seeing their reflection.

Learning about art from trash was a good reminder for me to continue being mindful of my actions and how they impact others. Being an upper-middle class white person, I do not face the direct impacts of pollution and the mass production of waste. A couple of years ago, I watched the documentary about Vik Muniz and learned of his visit to the giant garbage dumps in Brazil. Not only did he draw inspiration from poverty and pollution, but he employed and worked with the very people who inspired him. I was pleased to encounter an instance where an artist used their art to truly elevate others’ unheard voices, not just reference them. Although I appreciate and use art as an escape from reality, lately, it has been seeming more difficult to do so. I literally could not even step around my room without being reminded of the current state of our world. Fortunately, the ideas of pollution and systemic racism go hand in hand with one another, as black and brown communities are most affected. I hope that this installation encourages deep reflection of how we balance the focus between ourselves and the rest of the world’s inhabitants.