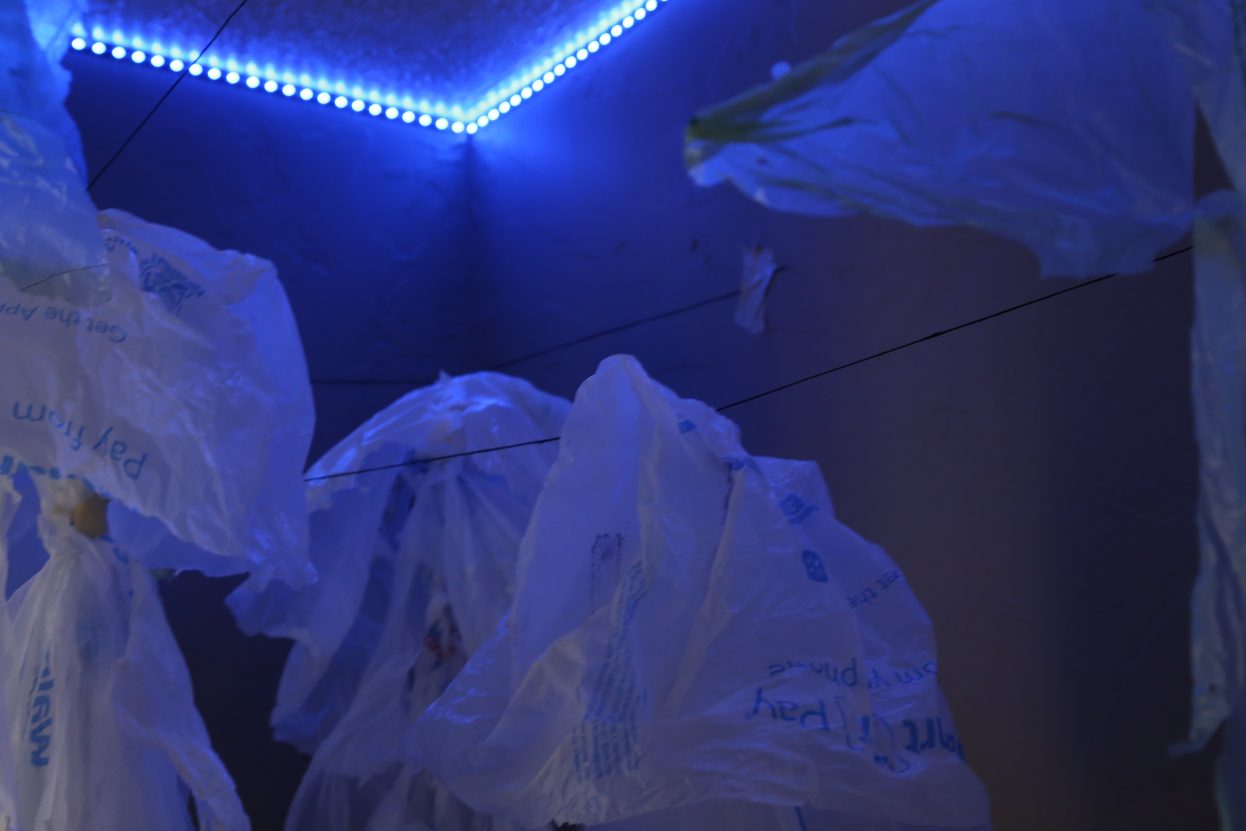 I’m saddened by the thought that there will soon be more plastic than fish in the oceans. For this project, I wanted to create something that would resemble a jellyfish closely from a distance but would be made of a common single use plastic: grocery bags. Single use plastics have become a very politicized form of trash in recent years, and I wanted to explore their physical properties as well as how their use would evoke a response from an audience.

I used grocery bags almost exclusively for this project, only using tape and twine to suspend the forms. I melted the tentacles onto the “bodies” using an iron and parchment paper. It was fun working in a home studio space; I feel like it heightened my connection with the pieces. All of the bags I used are from my house. My mother always saves grocery bags, so we have hundreds of them in a large bin. Making art out of material I’m familiar with but have never perceived as valuable was very interesting.

I wanted the jellyfish to look haunting. I wanted them to look like a warning, like if they could speak, they would tell us to take drastic action now. To stop overfishing and dumping plastic into the ocean. The visual nature of this piece was partly inspired by the work of Manthia Diawara, an artist we discussed in this class. He talks about leaving behind your identity as a human and embracing an intergalactic, alien one. In this project, I gave myself permission to be an alien. I allowed myself to become obsessed with these plastic jellyfish while I was in the process of creating them and didn’t fully think through the activist side of this piece until I was done.

I knew I wanted to work with plastic from the start of this class, but I didn’t decide on making jellyfish until the middle of the second week. My original idea was actually to make a bikini out of grocery bags. But my professor posted a tutorial for making floating forms, and I had so much fun trying it that I decided on jellyfish so I could use some of the techniques from that video. The project came together smoothly after that; I began experimenting with different shapes and sizes of jellyfish. The first one I made was a little to large to sustain much lift, and looked a bit lifeless. I stuck to smaller forms after that and had much better luck.

This is a photo I took at my home workspace of the inside of one of the jellyfish structures. I wanted to give the top of the piece more structure, which I did by braiding plastic and forming it to the lining to make a softly set skeleton. This technique worked very well. Putting the jellyfish together was a lot of trial and error at the beginning of the project, but everything came together quickly once I figured the medium out. When I was setting up the display, I cut up some green plastic bags I had and added them to the scene as kelp.

In this class, I’ve realized that trash is an excellent expressive medium. When you think about how much we throw away and what we throw away every day, you start to realize the wasted potential of the materials we’re dis carding.