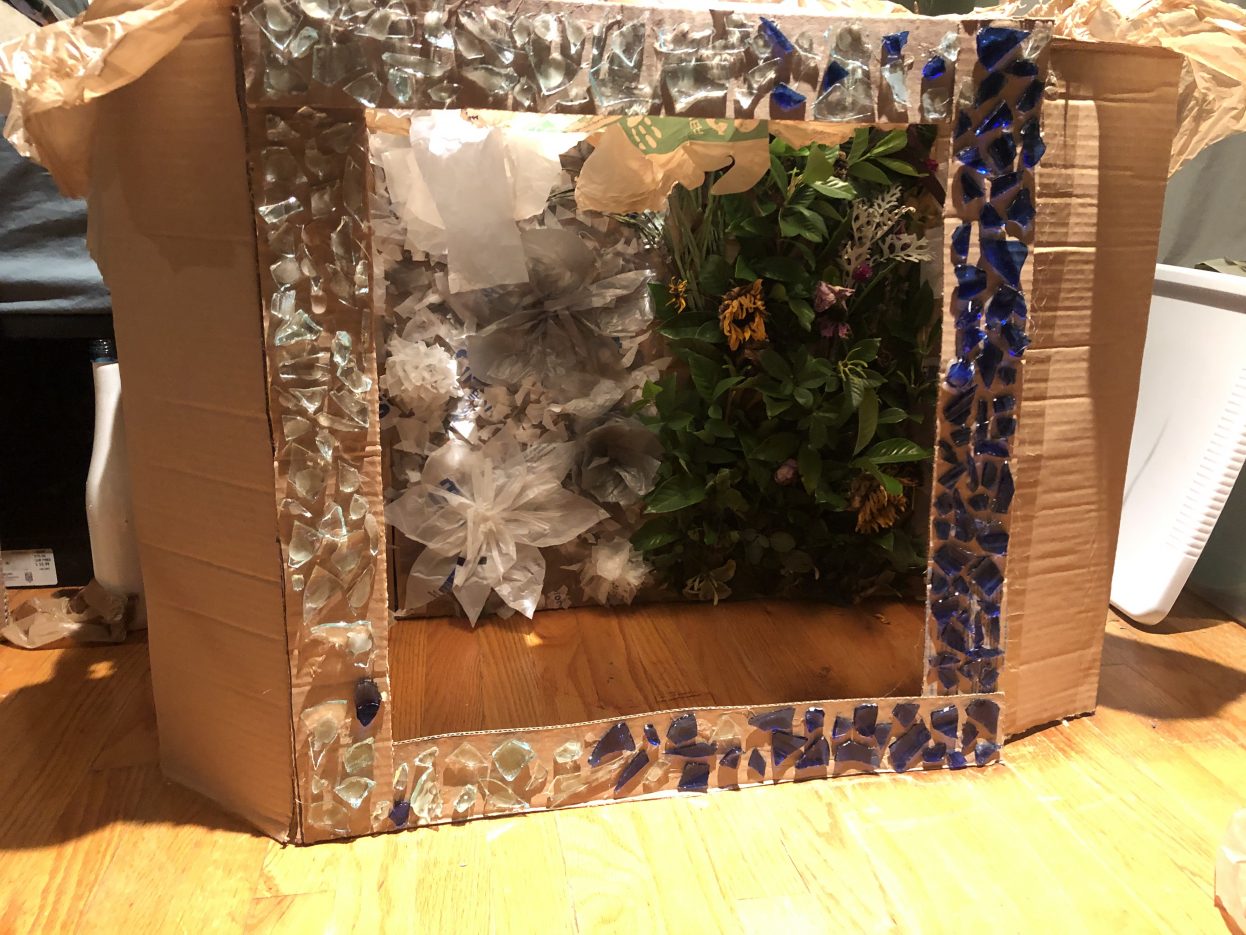 This class has opened my eyes up to many different ways to look at art and trash and has shown me that you can make anything out of anything. I have learned so many things during this course, such as art can be made out of anything – there are no rules! No one can tell you that you are not an artist, it is up to you to decide wether or not what you create is art. Art also does not have to be perfect. In fact, some of the best works of art in the world are perfectly imperfect, and you should allow yourself space to breathe and explore without the pressures of getting everything exactly right. I have also learned that there is no right or wrong in art, and that art is completely what you make of it. Two people can look at the same piece of art and come away with two completely different interpretations of what the piece meant. Each of the artists that we studied had fascinating and varied ideas about art, and how to incorporate trash into their pieces. I especially enjoyed how large-scale Kiefer’s designs were, and that they incorporated a lot of history, as well as the social aspects of Wilson’s art, and the sense of community that came with them.

The ‘art of discard’ is a very fascinating subject, which I wholeheartedly believe in. Art is about storytelling and emotions, and you can learn a lot about a person by going through their trash, just as you can learn about an artist by observing their art. Combine the two, and you get an even more personal look into someone’s life in a variety of interesting ways. I had never thought much about trash before taking this class, and now every time I go to throw something away, I stop and think about the many different ways I could reuse it. This class has also made me more aware of how much trash I (and humans in general) produce on a daily basis.

Creating art with only the materials at hand was definitely challenging, and made me think outside the box and be more innovative and creative with my ideas and the ways that I put things together. My favorite medium I worked with for this particular project were the dead/fallen plants. They are so beautiful, and there is something so sentimental about working with flowers. I had never worked with flowers before this piece, and that was not the only thing that was new. There were many different mediums that were new to me, and that I had to experiment with before I found what worked and what did not. This experience was unusual, but one that I am very glad I had. It has taught me to think about things differently, and to try to come up with new solutions to problems that I might not have tried before.

Kiefer initially inspired me to go super big with my project, but then reality hit me and I realized I was not going to be able to do as large of a scale as I had originally hoped. Although I could not do a huge model of my assemblage, I still drew inspiration from Kiefer in the way he uses trash to tell the history of his people.

I wanted to create a tunnel effect with my assemblage, so that as you look at it, you can see multiple layers and different stories on top of each other, but that all have the same moral and ending. As I was building my project and coming up with the different pieces I wanted to put together, it seemed to jump from one idea to the next and was all over the place. As the ideas came together, however, it started to have a nice flow to it. It is still clearly separate ideas, but the ideas coincide and relate to each other, and create a clear path to the end result.