My Conference project began with me reflecting on past experiences throughout my life and joking with a few family members about those experiences.  I have dyslexia, a language-based learning difference.  Growing up, I would often, and still to this day, misread very common signs, logos, or anything with words.  The idea of relabeling the things that I misread to how they ‘should be’ spelled to me came about after my final piece in our “Finding a Form” unit.  Here, I began to play with text as a way to disrupt the visuals of an image.

My conference proposal consisted of a long list of signs of which I commonly misread and a digitally edited photo, showing a couple of my earlier ideas.  It shows a visually distorted “Geek Squad” car, as you can find at any Best Buy, with the text: “Greek Salad”.  This first iteration of this concept of relabeling was inspired by one of the stories I was telling and joking about before beginning the conference project.  When I was around seven or eight years old I was at a Best Buy with my Dad and asked in the most sincere way I could, “Why does that car say Greek Salad?”  I decided to use this story as my first trial of the idea because it is one of my earliest memories of misreading something in this way.

Moving into my first draft, I wanted to move away from solely digital photo editing and experiment with different ways to label.  I decided to relabel text using 3 forms, a Polaroid photograph, a physical object, and a digital edited picture, meant to look seamless.  To label the polaroid photo and physical found objects, I used a mechanical Dymo label maker.  This first draft in this format was of the name and logo, “Stop and Shop.”

My second draft was of the words “State Park.”  While it is very common to see a sign on the side of the highway that says “2 miles: Harriman State Park”, I more often than not will read the sign as saying “Skate Park.”

During each of my in-class critiques, each person had their preference on which of my forms was strongest, yet the overall understanding of the project was consistent.  Going into Critique Week and my external crit with John O’Connor, I was facing the difficult decision of how I wanted to present this work in its final form.  One question John had asked which led me to narrow down my ideas was “how do these pieces transform?”  In other words, where are going?  These questions allowed me to take a step away from the work and think deeper about my reading process, and more specifically how I process information.

In an effort to create a physical and visual illustration of how I process language, I revisited the labeled Polaroid photos of my drafts one and two and took additional Polaroids of those pictures.  The new pictures were then to be labeled and photographed, repeating the process until there is a result of four Polaroids each with its own unique, evolving label.

The first attempt at this idea was fairly successful and received well.  The only primary issue was a large bright glare created by the flash of my camera.  I attempted to improve this for my final draft but was unable to completely remove the glare.

The final draft of this work did a good job illustrating my reading process.  When seeing a word or a sign, I have an initial idea as to what it says, but must read it again to make sense of the word.  In each layer added and photo taken, the time it takes for the Polaroid to develop represents the time it takes for me to process the visual information I am given.  Creating the label letter for letter represents the process of putting those letters in context with each other. 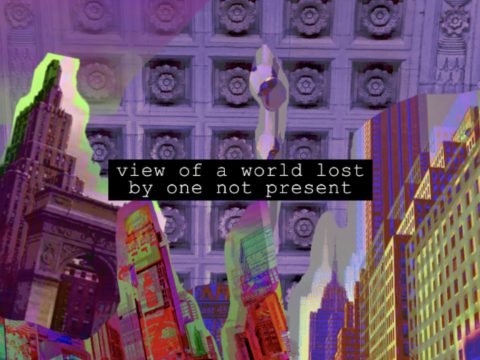