My initial idea for our Conceptual Conference project was to take raw footage from an experimental short film I shot out in the Salton Sea area of southern California out in 2017.  The footage was an abandoned project and abandoned projects always haunt me.  The original project was the brainchild of my friend, experimental filmmaker, Felicity Palma.  She was diagnosed with breast cancer at the age of 28, a few years before we shot the piece, and was reflecting back on her treatment which included taking anti-cancer drugs which permanently damaged her fertility.  Prior to undergoing radiation treatment she elected to harvest her eggs so that she might one day be able to have a family.  We tried to represent the idea of fertility (pomegranate), the medicalization of reproduction (the knife), domicility (hair curlers) and other symbolism associated with femininity in conversation with the toxic landscape of the Salton Sea.

Side note: “the Salton Sea, one of the world’s largest inland seas, has been used as an agricultural sump for more than a century.  It is sustained mostly by agricultural runoff replete with fertilizers which cause algal blooms that cause fish die-offs. The area surrounding the sea has an intense rotten egg stench coupled with polluted air borne particulates produced by the rapidly evaporating sea which has caused a health crisis for residents of the desert region.  The toxic dust contains pesticides and heavy metals like arsenic.”

I received feedback from the class about the images of the desert footage which I used to help shape a second rough cut of the film footage.

For the third iteration of the piece, we rendered 3D objects (pomegranate, flower, and knife) out of Cinema 4D, which we brought into after effects to composite into the original footage to create a finished sequence.  I chose an object from the desert footage, a pomegranate, to incorporate into the film footage.  Manipulating the footage by adding variations of 3D pomegranates I was able to push the footage into even more surrealist terrain.

Simultaneously I had been developing a slit scan effect in Touch Designer (“a node-based visual programming language for real time interactive multimedia content”) for my Time Based Art class in the dance department. The slit scan was intended as the primary media feedback interface of an interactive dance and new media project. Though I had fleshed out the form for this piece, I found that the content lacked direction, in that I hadn’t decided how to fill out the form, both in terms of movement direction and in terms of image creation.

Angela suggested that the film that I had been working on in class might be figured into the interactive new media piece as visual décor for the LED screen/virtual stage. This idea helped me ground my ideas for the interactive performance piece considerably, by helping me tap into a “narrative” structure over which I draped abstracted images created by the technology which I felt spoke to the dissolution of identity. In this new integration, the desert of the film footage was echoed thematically in the dune-like abstracted images created by the technology.

My next step was to get into the “virtual stage” with the LED screen, to see how the technology of the slit scan would respond to being danced. I brought a large pole into the mix as a prop which I hoped would help teather the movement direction of the piece, essentially creating a duet between my body and the object (pole). I received feedback that the pole was too rigid visually, so I shifted my plan to working with an enormous nest of tubing. This new object seemed to align more with the themes of birth and archetypal femininity.

With Angela and John Jasperse’s feedback I was able to merge the desert footage project and the interactive new media project to create Protea, a performance piece featuring a large LED screen, interactive media design and large-scale video installation.

After another critique, influenced by video art references, I layered frames in the video footage in order to point to a self-reflexivity within the structure of the screens. The real choreographic thinking in this piece has to do with the layering and manipulation of filmic images and less to do with traditional dance.  It’s exactly this disruption of genre that excites me in my practice and I felt very thankful for the opportunity to create this work in conversation with the professors and student’s of Sarah Lawrence this semester.

My final project, Protea, utilized the LED display as well as a Steadicam operator to provide a moving camera perspective.  The piece sought to recontextualize my own practice of creating works for dance and new media. The content I generated concerned archetypical femininity, labor (literal and figurative), of at once being birthed and giving birth, and my struggle to come to terms with the changing landscape of my own body since becoming a mother. I was also working with images speaking to the erasure of identity, pain and transformation, the dissolution of identity and the human body as mediated by technology.

I’m very interested in making genre-defying work, and having the opportunity to incorporate an iterative approach to composition, both from a movement perspective and from the perspective of a visual artist who works with technology in media development.

I hope one day to create a course on developing new media design for the screen and the stage. I found the process of creating this piece within an academic setting helpful as a barometer to understand what is and is not realistic to achieve during a semester of work when a student is carrying a full course load. 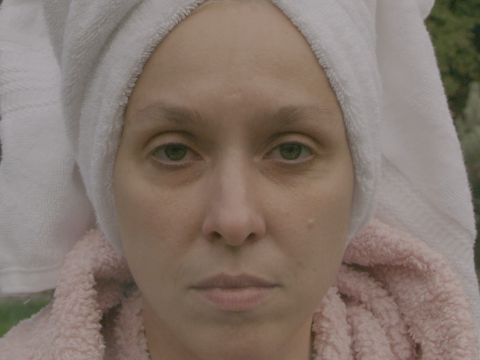