This project for me illuminated the inner workings of process and practice, and ultimately by the end, through necessary frustration and confusion, I had a better grasp on the mechanics of making and bringing ideas to fruition. Previously I felt I had bought the myth of inspiration, or of moments “coming to” you, that then prompted the active going towards ideas, searching them out and then interrogating them. I think the actuality of idea generation might be the inverse of this, inspiration is the product of the work of ingestion, there must be a physical means to send your signal through, and then other objects to have that wavelength bounce on and off of to then move forward.

Beginning this project with the search and acquisition of evidence, I was lost, evidence of what? What was my what? and does evidence have to be of something, what does that mean, to be of something. Does it mean to come from somewhere, is it the fragments born of a somewhere and some time that happened? Does that relegate evidence to multiple space-times or outside of them? Initially part of the past that was-the-present, a whole truth broken up and almost indiscernible, in the now-present, where the possibilities of what it could be of have completely shifted and morphed. Evidence can also be made in the present, formulating an imagining of a future event to-be-born.

Unsure of what evidence meant in the artistic sense and not knowing my what of, I decided to collect my evidence through encounter. I was going out and exploring this new place, I had just moved to Yonkers from my small valley town of Colorado. I know little of this place and none of the people that inhabit it. In this new world there are no people just evidence that they exist around and outside of me, the objects humans create and leave behind, are the evidence being here.

My first round of evidence came in the form of photographs. I was initially ‘inspired’ by the photography book Evidence by Larry Sultan and Mike Mandel. Where they recontextualized government agency images through their own sequencing. Allowing for the form of the book to imply narrative, that they could then exploit to string these non-related images together in the mind of the viewer. This form also relies heavily on the tool of the viewer and their imagining of the events pictured and the story they tell themselves throughout to make the what of.

My images consisted of straight-on horizontal (on the ground) photographs of left behind, forgotten, or lost objects as well as photographs in my own archives that were specifically nondescript or accidental. I then made two photography books myself, the first one I sequenced and titled Evidence of Passing, to invoke both the idea of the stranger passing, the passing of objects from one person to another, and passing away–the death of the life that these objects once had. The second photography book was made of the same images, but this time I numbered them 1-34 and used a random generator to sequence the book. As an interrogation of my place in the work, asking where is the evidence of my being here, am I made visible in the sequencing or in the evidence I chose? If I had known about random title generators I think I would have liked to have used one, but instead I titled the book Evidence of Where I End. To still conjure those ideas of being a stranger, one to my own work, passing by and passing off the idea to resolve itself in another realm; as well as my own passing–the death of my agency in the matter and a collection of pieces from my experience recontextualized to announce my ‘here’-ness for me.

For the second form of this same evidence, I went back to the sites of my evidence, relying on the chance that these objects had stayed put instead of passing through. I wanted to blend the physical form of the evidence with the digital renderings of those same objects. Physically recontextualizing them to be of the same place and time, one that I chose. Pairing the initial randomness of the encounter in the outside world with the purposeful invitation of these objects into my specific site/place. I put both of the book sequences and played them on a horizontal split screen, shuffling through the images in an off-beat disjointed way. Below this projection was a psuedo-shrine including some of the objects. The abandoned teddy bear held open a religious pamphlet that had been left for me by someone, the children’s book, the uprooted grasses and dead flowers surrounded the plastic wrapped shrine, and the skin of a baseball.

This new syntax led to new interpretations of the work that built off the first critique, wherein people were focusing on constructing a narrative from the objects connoting childhood. I did not mind those readings, but it was not what I wanted to stick out, I wanted to emphasize that these were sites of evidence that encapsulated unknowable personal meanings and histories, that morphed based on there place, time, and interpreter. Layering the digital with the physical to make it digital again, I felt spoke to the empheramilty held within the objects and their temporary encounters with the other, as well as the fleeting nature of memory, and how the medium of photography/video attempts to be a source of evidence to memory.

In the critique of this new form the themes of death resurfaced and were focused on, in the reading of the work people were picking up themes of “melancholic despair” that this shrine was held in a ‘damp, darkened cave,’ in a somewhere else by a person deeply sentimental. This direction was an expansion of the seed that was planted in the initial photography books, ideas of symbolic and literal passing away. When we were prompted in our second renditions of the evidence to rethink form itself, to consider anything as form, I decided to confront this thematic directly. I decided to use a form of performance– the funeral. I went back to the site where I encountered most of these objects to perform a burial and elegy. The elegy I spoke was made from the “Living Water” pamphlet from the shrine and public domain poems/speeches for funerals, I cut up words/sentences that stuck out to me and reconstructed narratives from these disparate sources. A new interrogation of the self–the voice of the artist in the making of meaning.

As the mouthpiece for these silent forgotten objects with an impenetrable past, I took on the role present in the funeral and in the religious doctrine as the testifier as a witness to something I was never there for. As performance artist Holly Hughes has articulated in the book O Solo Homo much of solo performance art, as a form “is routed, consciously or not, in a particularly American tradition of  testifying, of witnessing history in the first-person.”(pg 2) I testify to the life of the bear and the baseball as pieces that help those at this service answer the question posited in the text about ‘what must one do to have eternal life?’ That perhaps the answer lies not in “blood nor flesh” but in what is created from the “will of man.” That these objects are “he who sent me with water,” the ones who “will look and notice you looking for them.” That the gap of knowledge, “who are you?,” is traversed through the visual, “I saw you under the fig tree/You are greater things than these.” That in these brief flickering moments of recognition, “anyone can enter…[the] womb a second time and be born,” the surface of this water and the confluence of ideas is a cyclical process of meaning-making that is both influenced by the external and realized internally.

This form also aloud me, through my appropriation of religious texts, to formulate my own myth and subvert the words original meaning. If the words of the Bible are evidence of Christ’s existence, but they have been translated and mutated through different minds/mouthpieces/witnesses what does another translation do? I felt that these aspects of the spoken performance and the visual performance of grave-digging with a spoon (the conductor of alchemical transmutations in the kitchen and the mechanism of bringing nourishment to the site of ingestion) and the flower embalming/water burial (inverting the embalming process, which propagates the myth of the body as unclean in death and inserts chemicals/poisons/metals into the body to cleanse it, when in reality the body is cleanest in death, and nature itself is made from the constant recycling of the dead but is still clean/pure/not-poisonous) allowed me to highlight some of the absurdities of our cultural dealings with death. As well as the absurdity of our ravenous desire to escape/triumph over the end when in reality it is a source that binds.

In the final iteration of our evidence we were encouraged to bring forth an aspect of our work that had taken a background position. For me the most forgotten of forgotten objects was the physical children’s book of the spider. Each form had worked with a book in some way, first as digital photography books projected with the physical “Living Water” text, the second thematically cutting/pasting the words of that text to make my own, and finally going back to the physical evidence of this book I wanted to manually cut and paste, in the form of a collage. I was also frustrated with my evidence at this point and this decision was also informed by my desire to destroy it. I went back to the site of the teddy bear’s burial and dug him out of the damp earth. By chance this was also the week that my partner Josie (mentioned in the first image’s caption) came to visit me, we went back to the grave as diggers, they helped me recover this object, as a witness to the aftermath of a process unseen and unknown. I wasn’t strong enough to cut the cardboard of the spider book or open the skin of the bear to access its insides; it was by the chance of our brief encounter, the luck of inhabiting the same place and time at once, before she would pass through my somewhere to some place else again, that this collage was made.

The collage through it’s tears and recontextualization by having all of the objects inhabit the same site, unconsciously spoke to what was happening in the process of it’s making. Julia made it to this final resting place as well, in the form of what contained the air of her 21st year and the doorknob that contained the space we shared.

Through my desire to destroy my evidence, to be the decisive hand of the artistic agent and end the life of the objects I collected, I unconsciously upheld my initial intention of –acknowledging/being acknowledged by objects hovering between being and not-being/embodying meaning or not, and allowing them to be reimagined. This attempt at destruction and erasure, of ultimate and final death, became the site of rebirth and cyclical connection. This also brought to the foreground a largely ignored thematic–life. A necessary part of this polarity, the ultimate maker and definer of what death is. 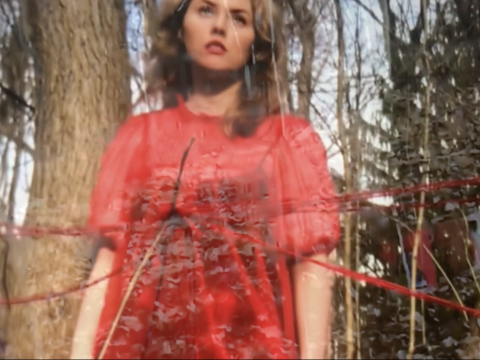