The Body Keeps The Score

I found that the methodologies we employed in our Finding a Form project provided an engaging contextual framework for making, one which allowed us as artists both to be held by and also free to revise an abundance of ideas while remaining focused on production.

For this exercise, which spanned the first half of our semester, we used the toolbox of iterative development in order to construct creative schemas which we applied to and adjusted for each new form.  By incrementally developing a uniquely individualized syntax, we worked to devise a system of organizing and perceiving new information based on an evolving value system self-determined by each artist.

We established a dialectical interplay between forms which allowed for thematic evolution within the material by employing individualized compositional strategies.

Angela guided the class through group critiques wherein each artist had the opportunity to see their work decoded by their peers in a collective interrogation of the integrity of each work.  I find the group critiquing process to be a fascinatingly flexible/resilient method for analyzing creative work.  This system of critique is diametrically opposed to what I’ve experienced in the “dance word” wherein a master teacher critiques a student’s work in front of a class based on the system of values the teacher has defined as most effective aesthetically.  Group crit, as a critical technique, seems to develop a community wherein trust of your  peers to speak constructively about your work is fundamental.

When my six month old daughter Frankie was born she had several mysterious physical deformities which I noticed immediately and began asking our doctors to address.  I was repeatedly met with reassurances from doctors that she was a perfectly normal baby and that there was nothing to worry about.  I was told I should stop Googling her symptoms and focus on resting and getting sleep (fat chance with a newborn).  We went through several pediatricians hoping to find a doctor who would help us to provide answers and finally found a pediatrician who referred us finally to a geneticist.  All of this was happening as the bell jar of the pandemic came down around us isolating my new family from the outside world and from easy access to medical care.  After many months of tests and worry we received the news that baby Frankie has a rare overgrowth genetic condition which predisposes her to certain cancers.  The condition requires regular monitoring of her internal organs and blood to catch any cancer that may develop.  I’m including all of this information because it’s relevant to our Finding a Form Project- I swear.

The evidence I initially collected was video footage in which I tried to document the subtle physical deformities that I noted when Frankie was born (the signs which put me on the war path towards getting this rare disease diagnosed).  The finding a form exercise wound up being very personal and therapeutic for me in that it allowed me to work through my fear about the unknown, about being disbelieved and about stepping into motherhood in a different way than I had hoped and imagined.

Some themes I found which provided context for the image based media I made for this project include:

In group crit, the class seemed to read the initial evidence as a tender depiction of motherly love more than a document of genetic anomalies.  It was heartening to have the piece read in this manner as it helped me to perceive the hardship of this clinical diagnosis with compassion and the understanding that my bond with my daughter is stronger than disability or disease.

Nonetheless, I decided to take the initial evidence (video of the baby) and layer it in an attempt to visually represent the feeling of dread I had as we sought answers in those early days.  I projected the initial footage of my daughter onto my own naked body and then, using Adobe Premiere, multiplied the images using blending modes.  In creating a moving collage of multiplied images, I sought to develop a syntax which could connote the dread I experienced in thinking that my child might not be “normal”.  The image of the baby projected on my post-pardum body addressed my desire to grapple with the trauma/ process of childbirth via surgical intervention (ie c- section) in concert with the idea of genetic mutation as represented by distorted and repeating images.

In the following form, I tried to change up the digital format by taking photographs of my baby, cutting them out and then creating a decoupage composition.  Again I used repetition (paired with imperceptal changes) to signify the process of chromosomal duplication/mutation.

For our final form, Angela instructed us to take a background element present in the forms thus far and bring that element to the foreground.  I decided to focus on the figue of “the mother” in the final form.  I set up a two way mirror.  On one side I positioned a camera and on the other side I did my makeup capturing this ritual at a high frame rate to yield slow motion.  During the film I do my makeup in the mirror changing from a robe into an evening gown surrounded by the lush greenery of a suburban backyard.  In the closing frames of the piece I leave the frame to re enter with baby Frances.  For me this piece is about reconciling my twenty year career as a touring performing artist with my new role as a mother.  Having conformed to a certain amount of generally heteronormatice social pressure to become a mother,  I am both reflecting back on alternate iterations of myself and meditating on how this new role of mother will impact my work as maker-of-things with gratitude, trepidation and wonder. 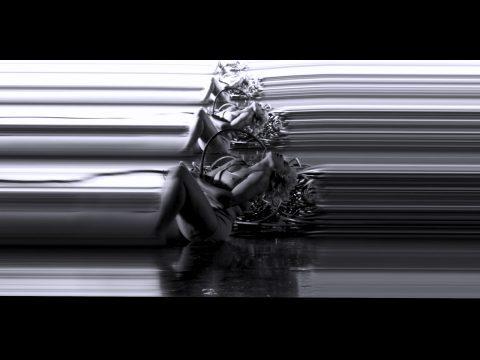