Creating three different projects under the premise of “finding a form” took me through quite a lot of states- artistic, emotional, and otherwise.

Initially, when tasked with collecting evidence, I wanted to find physical evidence of the passage of time. Living in a rural area during the COVID-19 pandemic made me feel, at that time, like every day was the same. My life had become rather routine. Only very few things around me could indicate that today was not yesterday. I collected an empty soda bottle, an old grocery list, a calendar page, a wilted flower, an apple core, a half-smoked Marlboro, several pages of my internet search history, a dirty sock, screenshots of my sent and received emails, and a clump of my hair that I rescued from the shower drain.

All of these things showed that I had existed over a period of time in a tangible, physical way. I ate and I drank, I dirtied my clothing, I bathed, my hair grew, and I spent a lot of time on my computer.

When finding an initial form for this project, I felt that my original evidence was too large and nebulous to synthesize a piece from. When I presented my evidence in class, my peers did not pick up the thread that I saw connected all of the objects. I decided to simplify what aspects of my evidence I would focus on. I would utilize my search history, as during the pandemic most of my time is spent online. I printed several days worth of my internet history. It documented my school work, my job, and my free time all in one long list.

I then had to find a form to present this information. Working with associations came to me rather easily. I decided to make a box out of the printed out pages of my search history. I was drawn to the idea of creating a physical object out of evidence that was entirely digital. I am very much intrigued by artists who work mostly with creating objects, such as Robert Gober. I used a box that could sit in a more presentational manner, much like a display box or a gift. I carefully covered the entire box with my internet search history. I then took gel medium and made transparent transfers to layer over the box to create a more three dimensional look to the layers of history.

At this point, I felt mostly satisfied with the piece, but it felt silly to make a box that so lends itself to displaying something, but not have anything in it. I decided to return to the original evidence I had gathered. I wanted to communicate not only the digital passage of time, but the physical repercussions of it. The half-smoked Marlboro spoke to me the most. It communicated both the stress of this work and time period, but also the relief break time can provide. I displayed the cigarette in the center of the box and surrounded it with more transparent layers of search history.

For the next form, which centered around discovering syntax, I decided to move away from physical art forms. I thought I would push myself when I picked what medium to work with. How could I communicate more about the passage of time in a digital realm without just making another object out of my search history? I finally landed on making a series of photographs, each one incorporating the photograph before it displayed on my computer screen, eventually creating a tunnel-like effect. In each image, I am holding a different page of my search history. I recreated this process in three increasingly surreal environments, and eventually took one final image that included the final images of the three previous sets.

I had an incredible amount of fun with this form. This project sort of swept me away, and I ended up taking 22 pictures. My wall clock is present in some part of each image, and overall the entire process spanned 11:25 am to 1:45pm. The fact that my piece about the passage of time took a long time was thrilling to me. I decided to synthesize all 22 images into a looped gif, furthering the eternal and decontextualized feeling of time during a pandemic. I also very much enjoyed the syntax of the gif/ digital photographs because they are very much forms of cyberspace, and I was very excited at the prospect that when a viewer looks at this piece, their own computer monitor adds another layer to the work itself.

Finally, I had to find a final form for my evidence. At this point, I felt somewhat bored with my evidence, as well as with finding form after form. My internet search history only had so much to offer, and I had spent so much time thinking about it that I felt fried. The first two forms felt like they just fell out of me, propelled by my excitement about the work. When I reached the final form, however, I felt stuck and burnt out. I had to establish a value system, but I was somewhat confused as to what that meant, and didn’t want to do it.

I pushed through, and spent a lot of time thinking about what aspects of the previous two forms I had not focused on. What was a key component of each of the other pieces that I had not highlighted? I realized that none of my previous works acknowledged how they were made, and my whom. I decided to highlight both my own presence and the presence of my printer in the work. Without myself or the printer, none of my evidence, either in a digital or physical format. For my final form I created a 3 minute 17 second video piece of myself working on my computer in front of my house.

All the sourced video clips are from two different time lapses I took of myself (with a short break between them for dinner with my grandmother). The clips are mixed together so that they are, for the most part chronological, but are occasionally interspersed with moments later or earlier in the time lapse.

Every five minutes, I print out a page of my internet history and pin it to the wall behind me. Occasionally the camera zooms in on a certain part of the video, such as the clock turning forward or the top of my head. The audio for the piece is a mix of the noises my printer makes when printing out my search history, further elevating the value of the printer itself.

The timelapse takes place over about two hours, and in that time I included many different signifiers of the passage of time. I burn several sticks of incense,  the light stretches across the floor and then fades, I drink a glass of water, the wall slowly fills up with pages of search history, the temperature drops and I put on a jacket, and I take a smoke break.

I added the cigarettes back into the piece after moving away from them in my second form because in critique, many of my peers expressed a want to see more of the stress of the “character” from the first piece in the “character” of the second piece. I decided to combine both of these versions of myself in the final form, noting both the surreal nature of spending so much time on the internet, and the stress of computer-based work.

By the end of the piece, most of the wall is covered in pages.

Overall, finding these three forms from one set  of source material taught me quite a lot about artistic perseverance. I have never before worked with one material or concept for this long. In my past projects and classes, each project is its own discrete entity that is developed to completion and then set aside as “done”. At first, working to find three entirely different forms for once collection of objects was incredibly difficult for me, and I found myself resisting it. Eventually, however, I found the process quite fun, both emotionally and conceptually, and I created three different projects that I am quite satisfied with. 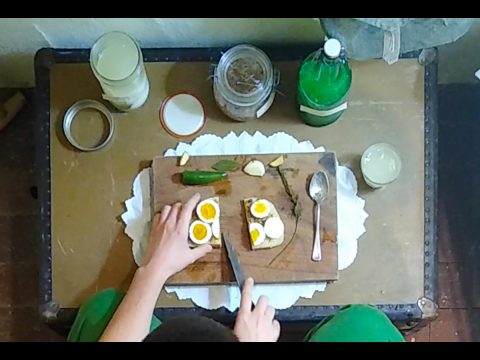