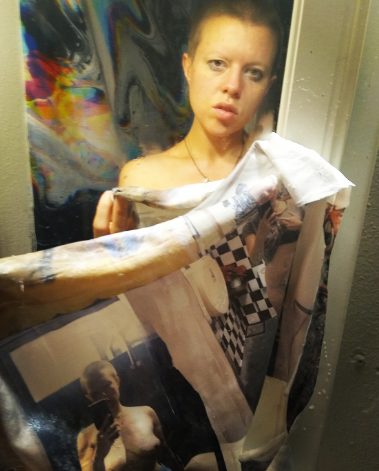 This class began with an exercise in expressing a single idea or thought, a form or collection process of evidence, in various incarnations. This could look like really quite anything, and, initially, I could think of just about nothing. I thought initially that my evidence was on bodies and death, and bodies dying, bodies we don’t know are dying, or don’t want to know are dying. This wasn’t entirely untrue to my eventual and current focus, but, in attempting to capture this, I found my lack of ability to describe, to be more a frustration and form of evidence in itself. I eventually found sides to my evidence on body and death that reflected more my internal change after witnessing so many deaths, and the hollow of grief that doesn’t feel like a hollow at all. The impossibility of explaining that, and of explaining how empathy becomes a void, and an inherent truth in all human relationships that requires practice and nurturing. Through this empathy we see each other. Through this seeing, the hollow in us at which our selves as things may rest in the bottom becomes, if nothing else, a mirror of the empathy we have nurtured towards others. If nothing else, we are a hollow of empathy and human-ness, even if or when we lack the ability to identify ourselves as anything.

For me, the real finding moment in this class came in the middle, when Angela recommended that I look into Sophie Calle. A french artist, she creates organically and strangely. She isn’t afraid of overstepping, and completely embodies her work–to the extent of becoming it. There are people who say they aren’t sure they have even met Sophie at all, even having known the artist for years. She reminds me quite a bit of the author, Clarise Lispector, who I have been focusing on this year as well, and their collective otherness of persona has been wonderful to experience together.

In my first form during our exercise on evidence, I was a bit lost. I am new to Sarah Lawrence art classes, and have been away for quite a few years. Initially, I collected quotes from people in my community about why they thought that people chose to “van-life,” or, choose to live out of a converted van instead of in a traditional home or apartment. As a part of this community, I have found that most people have a very dreamy idea about what vanlifing is, imagining it as a fun travel experience or a way to run away from society. Most vanlifers I know are millennials, some a bit older, who have found themselves in dire financial need, with the choice between a home and a car, and a necessity for a vehicle in order to get to and from work. This is a gritty picture a lot of the time. I quickly moved away from this evidence after settling into the class and thinking further.

My second form was an experience in working with new materials that didn’t act as I thought they would. As I posed with the images of my body in the multitude of images I take while “body-checking,” which is an eating disorder behavior that involves various “checks” on whether the body has changed or not. As a behavior I have yet to eradicate many years into recovery, this clearly to me represented the relationship between the body and its nearness to death, intentional or otherwise.

Before this initial form on body, I had taken photos of myself dressed as people who died in the ways that I was ruminating on the most–Amy Winehouse, for example, who was not, as most assume, high when she died. She had been clean for some time, and relapsed on alcohol. As a woman who had become bulimic at 14, her body experienced a deadly combination that has taken multiple people in my life. Both bulimia and alchololism weaken the heart. The combination is, over a period of time, absolutely deadly. This is my favorite thing I have done in this class, possibly only because it comes closer to communicating something I have been reaching for than anything I have done yet.

Next, I wanted to focus in on the friend who I had told this to, who later died in the exact same way. Because of my warning or interaction or foreshadowing of how she might die, I have been overwhelmed with very mixed emotions since her death three years ago. I have tried to write and make art about it, to no avail–this attempt was no different, and I found myself quite uninterested in the result. A combination of a fabric body outline, glitter, paint, and yarn to me was a way to represent our relationship, which formed over crocheting together in rehab, and the anger and frustration I feel towards her and myself. I have not let go of this emotional approach, but have yet to find a form that properly encompasses it, so I am holding it only in the back of my mind as I continue the class, rather than as an ultimate goal.

Many people in my life scoff at this class, which I am used to as someone who went to school premed and came back from my first semester having chose to concentrate on poetry. My biggest retort is to tell them that if they agree that the arts are useless, then they should give up everything in their life that has been designed by anyone at all. They would be left with only their body, and even that is debatable. This class has confirmed to me that there is nothing “easy” about art or conceptual art. It isn’t as comfortable to me as writing is, and that has been a fantastic challenge. I shy away from everything creative, written or visual, these days, and this class has helped me to move closer towards a space of writing and making again. 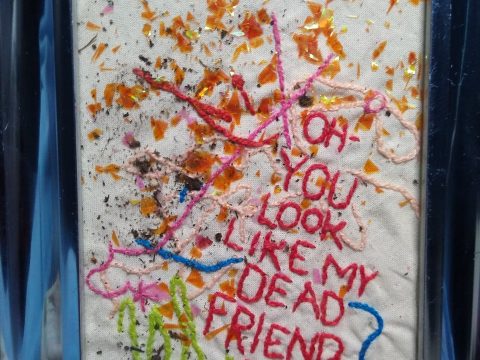