Conceptual Art–Form-FinalConfProgression/ YouLookLikeMyDeadFriend or MakingSomethingOutOfSomethingThatWantsToBeNothing or: a whole thesis on a process in likely more detail than was requested

I’ve spent a lot of time over the past…four years? Honestly, I don’t ever remember how long it’s been, because she’s almost always been more dead in my memory than she ever was alive and she’s been dead from my world longer than she wasn’t.

I guess everyone, someday, will be more dead than they will be alive. Were alive. There’s a particular feeling after losing people in quick succession, and knowing that, unless you change the people you associate with, it will continue.

You can set a calendar over it. It’s a great reason to relapse.

Capturing my emotions about this specific death is a forever kind of issue, that I don’t know I’ll ever capture in any form. It seemed easy the first time I sat down to write about her. I tried a journal entry, and the threads of sense floated off around me. The succession of events was the most I had:

I can remember, and the writing is awful.

I can remember, and, well…the art is significantly less awful than the writing, that much is true.

After Tess died, I was filled with guilt, rage, jealousy, and some grief. But, mostly confusion, and jealousy. I guess this seems simple enough, laid out in steps like that, but I can’t make it art, and I can’t communicate the exactness of the feeling, and how separate it is from grief. Because of this, as the Finding a Form project progressed, I understood more and more clearly how much this progression had to be about Tess, and my search for a way to represent the aftermath of her.

I don’t think I did that, and I didn’t expect to. But I got closer than I ever have, and because of that, I am extremely satisfied with my work in this class, and grateful for the opportunity I was given to play with new toys and try new things.

I felt my way through these projects intuitively, which, for someone who has not done much creative work, went well.

1-Evidence of my live body. I included an unintentionally glitched photo of a tattoo of someone many people hate without knowing. The glitch is generic and cliche, in my reading, for this type of class. He is generic and cliche–people think. But there is a deepness I won’t describe. A knowing, loving, and appreciating takes personal work, openness, and investment.

The second image is shaving my head, a process that I chose before I met any of my dead friends, and one I repeated upon the verification that I would, in fact, be returning to school. Both moments were sore, frightened, and near broken by the future I saw, but in very different ways.

2-I decided my body as it was would be helpful. But I wanted to present it as an object. When everyone around you is dying, they nearly become objects. You find that you don’t cry. We’re almost plastic. So, I tried to transfer photos of my body that I take compulsively in mirrors to check whether or not I have gained weight. The material was new to me, and I didn’t quite get it right, or it didn’t quite get me right. Either way, I had wet goopy glue coated paper, so I documented the object on the object of me.

3-It was becoming more and more clear that my project was on death, and that the most complex and furious death to me was the one I could not describe. I created an outline in fabric, paint and yarn–a reference to the crocheting that Tess and I used to do every day while we watched ellen. And when I told her. The photo again glitched on my phone upon upload. Again, I left the cliche.

4-Early in the semester, Angela suggested that I embody the public figures of self destruction that fixated me. Amy Winehouse was clean (from drugs) when she died. Having been bulimic from fourteen, much like Tess and I were, her body was worn, and her heart was weak. She relapsed on alcohol one night, and she died. Alcoholism and bulimia isn’t talked about, and 35% of bulimics become alcoholics in recovery from their eating disorder, putting them in immediate and grave danger. I didn’t think I would use these photos, and the nude ones taken on the floor were near accidents, anyways. I found a wifebeater in my closet, and suddenly remembered this image of Amy, and how jealous I always was of her body in it. I gave the bulimia glitter, and I made sure my eyes were dead. To me, this successfully represented my experience with bulimia and bulimic idols, and the dissonance that never shakes.

Separating these Forms from my Conference Work Seems Off–that final form, Amy Winehouse Didn’t Overdose, was the first form of my conference project–

Conf. Form 1.5– I enjoyed the embodying, and I enjoyed using my body, even though I hate my body, and I hate more having anything I do made public in this space, but that is required, so it is what it is. I decided to just do what I wanted to, because I couldn’t think of anything fake. So, I used my body in a way that was intended to insinuate weight restoration in eating disorder treatment, and the peer support/pressure/positive brainwashing between clients, and the amount of reliance placed on the responsibilities of those around you when what you are being treated for is largely about competing with those around you to be the sickest. This initial footage is used in Form3, the video itself was portioned into that, so its initial, singular form does not exist.

Conf. Form 2– I took the first footage, and decided to clarify, or confuse. I added other aspects of eating disorder culture, specifically the Fiona Apple song, which is a bit of a fight song in some unhealthy circles. I also decided to stop fighting how to communicate Tess. I just showed her. I inserted her into the video, and let her speak for herself.

Conf. Form 3-When I told Angela, mid semester, about the problem of Tess, she told me to make videos. Randomly, honestly, just talk to Tess, whenever I felt like it. I watched them over, and suddenly felt that they were all I needed, because the internal emotion and energy of a friendship of this nature, reminiscing about dead friends without being apologetic, and without making people uncomfortable. To her, I could say “Oh, did you know Andrew died,” and list at three more in the same line of conversation, without any fanfare or enormous emotion, and, while that’s strange and sounds hugely unhealthy to many people, that is the world we lived in. I’ve managed to streamline myself, as much as anyone “normal” does. I live here, with the people who know a couple of nineteen, twenty, twenty five year olds who have died. I chose to leave the world of knowing dozens, and there’s a missing, and a jealousy, that extends beyond Tess’ thinnes, or my warning of her coming death, her denial, and her leaving. Even gone, there are pieces of the communication I documented that are more present and real than anything I say to anyone today.

The only critique that stood out to me when I presented this final form of my conference is that it made the viewer “feel anxious.” I’m not sure it was said in a positive way, but–Good. Yes. And, in that world, it was a comfortable and normal emotion. Anxious, afraid, and whole heartedly raw, more honest than most people can dream of being.

I don’t know what I’ll make or do in the future, if anything, but this internal journey was cleansing and empowering. I used the honest and ugly of the reality that I’ve lived. I didn’t try to make anything palatable by softening the edges, nor did I bend to the equally comfortable image of sick people as sad, addicts and death as awful, low times as only horrible–like the sun doesn’t come up, and ice cream stops tasting sweet. Nothing is that simple.

I tried new things, and I enjoyed the process of every attempt.

Thanks, T. Every ounce of this strangeness was for you. 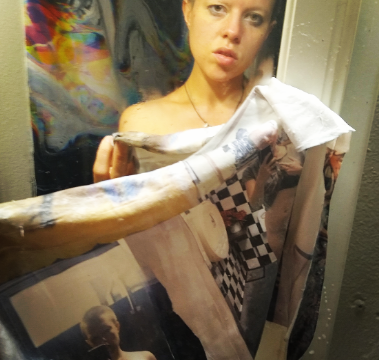