This conference project started as a standalone sound piece, which was meant to be an ambient loop of sound that evoked a sensation of everyday paranoia and anxiety. The sound part of this piece is a four minute loop that continues to loop for the duration of the installation. The sound piece portion contains realistic and abstract sounds that I found to invoke paranoia, but I also interviewed some of my peers and asked them about sounds they found paranoia-inducing, and then included some of those sounds. The sound has a few different drones of white noise and low-frequency hums, meant to blend with the white noise in the room where the piece is installed. The various different sounds that emerge from the white noise are meant to fade in and out from underneath the background noise, almost unnoticeable at first, and then more obvious. The sound piece is paired with a wall projection of a video taken of the objects hung on the wall, projected back onto the objects to create a shifting, double-vision kind of effect. The objects hung on the wall are a Rush Power Windows poster, a purple and black Halloween bat lantern, a calendar with a tree picture, two postcards from San Francisco, and a lily plant in a wooden pail. These objects are meant to evoke a sense of dorm-life hominess, as if the projected effect is happening in someone’s home or bedroom. The objects are familiar and comforting, but with interesting colors and images that I thought might make the best of the projected effect. The lantern and pail in particular were chosen for their 3-dimensional quality, which makes the projection more effective.

This project is personal to me because it contains a good amount of my sense of humor, but also shows a true look into the way sound makes me paranoid in my everyday life. I also chose sounds that were suggested to me from my friends and peers, to get a wider range of associations from a large audience. The projection effect is a creative tool that I find interesting and have been meaning to experiment with more.

The project was made using Logic Pro X for the sound, and I used a combination of sound library sounds and sounds I created. Many sounds I trimmed, reversed, distorted, or otherwise edited until I had them in an orientation I found most suitable for creating the environment I envisioned. The sound piece ended up being about four minutes in length, which I looped for a few hours to ensure that it could be installed for a while. Then I put the sound piece through four different speakers, pointed towards where the audience is predicted to stand most. For the visual element, I hung my collected object on the wall, took a swaying panoramic video of the display, and then used a projector to project the video back onto the objects. Together, the sound and visual elements created a sense of unease, paranoia, and divergence from reality. 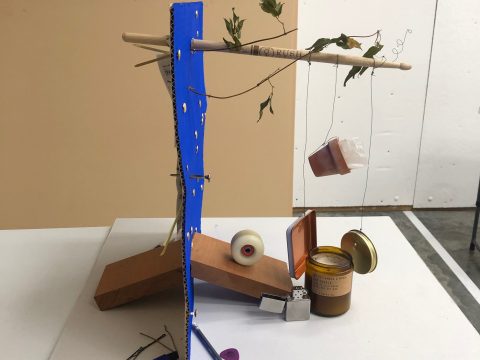 Paranoia: A Spell to Ward off Darkness – Star Board 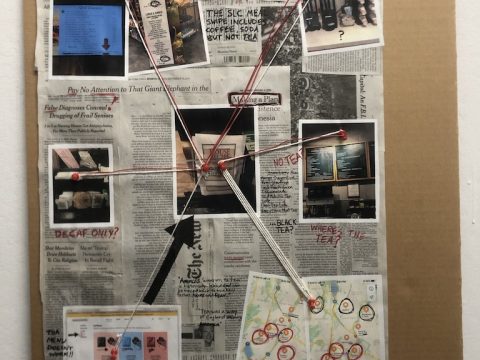 Paranoia as a System: A Conspiracy