I think about the world ending every day. This project was born out of the necessity to get my paranoia out there into something tangible which could be the start of making it more manageable, or at least more understandable. For me the only vehicle to channel this paranoia of mine into something a little less hopeless is through the visual; the physical act of pen to paper (in this case cardboard). All I had to create a project of this scale was what was already around me. Masses of cardboard to be recycled and paint markers, which luckily seem to be made for each other; but I guess anyone on the side of the road preaching this impending doom could already attest that.

This project began with the consideration of the original sin. How biblically the world as we know it started with the betrayal of its creator, and how that, in my mind, really set the scene for the apocalypse, the slow brutal crawl into the grave. With the biblical tone set, there was still much more to consider. I became interested in the different imaginings of apocalypses. There are three main themes of this work:

The classic apocalypse of biblical proportions, the one we have all come to know, the same ones Christians expect.

The doomsday quality of the news; the constant daily stream of horrifying events and the hatred against our fellow earthlings that is gurgled up nightly. The selectiveness of what is shared and hidden from the masses.

The personal ending of the world that is quiet, complicated, and isolated. A heartbreak, an identity crisis. The proportionally small way we live through the end of times. Bearing witness to the end of the world as we have known it.

Music is a fundamental part of my process. I often find through music I understand my own thoughts more and become inspired by lyrics or riffs. The interpolation of lyrics into this project was subconscious but as I continued it became integral. I began to choose specific music to listen to while working on this project; songs and albums that shared in my paranoia. There are lyrics in the project that are familiar to the viewer, they offer a subjective anchor to a particular piece; ultimately acting as a gesture of invitation, to enter into the chaotic world of the fantastical and the mundane. These lyrics ground the project in our contemporary time-space. Much of this imagery may seem bizarre or alien, but the lyrics make it real; they are the presence of human voices, a testament to that urge to create and tell stories, like the initial story of the Garden of Eden our story-making is our capacity to generate and destroy. There is one set of text that I wrote, a personal monologue of sorts that jumped out of me.

The final installation of the project is meant to be a chaotic, overwhelming, and forewarning. Ultimately, this project is an inter-tangled array of inner fears and anxieties that lives inside a small yet throbbing part of my brain- taking shape as they must. 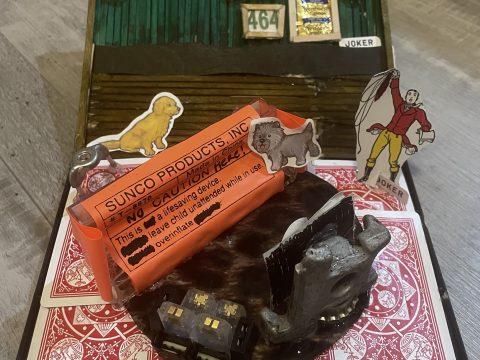 Paranoia as a System: Sit Down, Stay Awhile 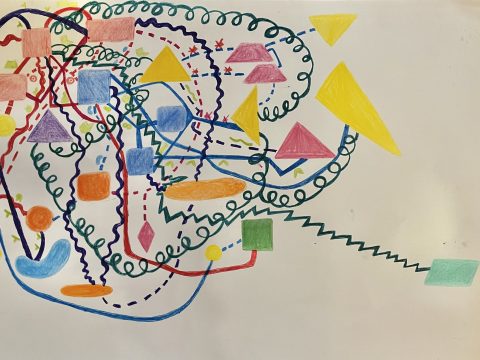 Paranoia As a System: Drawing the Line Through the Q