This project is a compilation of comics, and each comic explores a different aspect of life living within a state of paranoia. This paranoia centers around heart health but appears in a variety of ways, from a fear of heart failure to panicking about fainting in public. There is an aspect of self-destruction as well, and the subsequent inner conflict of knowingly hurting my body and making it weaker. I hope for it to convey a feeling of paranoia in facing the intersection of time, health, and uncontrollable circumstances.

This feels personal to me in the way that this is how I feel much of the time. My family history encompasses a lot of good health, but certain weird heart behavior follows down through my mom’s side. It is like I can see what’s coming my way but coupled with my personal tendency for obsession and paranoia, and most problematically my choices to do things that will do it more harm than help. It isn’t an outwardly freak-out paranoia, but it sits at the back of the mind and convinces me I’m about to pass out on the floor of a TJ Maxx. It’s a calmly sad and helpless fear, where the angel and devil on my shoulders are both just tired. That personal paranoia acted as the inspiration for the project.

This work maintains a simple appearance and was made with pencil, pen, and paper. Each piece of paper has a stand-alone comic which will is one piece of the larger sequence of all the comics together. The panels vary in size and amount, so the papers also slightly vary in size. The color scheme stays strictly red, black, white, and gray, because there is only one focus and force acting on the human figures, so I wanted that to be highlighted by the only bright color which is red. The lack of detail or factors indicative of gender or appearance is also for this reason. I made the comics into a certain sequence based on integrating both the feelings and real-world occurrences that go into it. It starts off very internal and static, and then moves into some actions that are caused by and/or cause the internal paranoia. It then retreats back into the inner mentality and what takes place there, with a standalone heart detached from its human context as the endpoint. Each comic represents a snapshot of life within this paranoia and so the sequence hopes to represent living with it, including a blend of external experiences and inner turmoil. 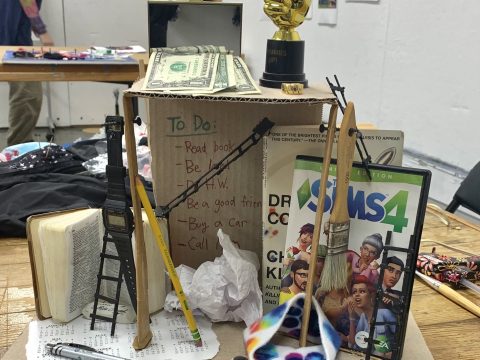 Paranoia as a System: The Balance