This piece is a large and wide canvas that includes paint and painted paper appliqué. The picture depicts a group of children that are running towards one of their smaller friends that seems to be getting tormented by a duo of older children. Placed at his feet is a bucket of pink milk, which the older children seem to think he stole or messed with. This piece is heavily inspired by the outsider artist Henry Darger.

My initial motivation for creating this piece was a grand idea I had that came to me about a week before the spring semester started, that I thought being in this class would allow me to achieve. This idea started out a lot more fantastical and otherworldly than it ended up becoming, but I think it had an evolution that made sense in the end. The initial idea was very clear in my brain, but I soon realized that it could seem quite scattered and hard to pinpoint for others, as I didn’t have a concrete outline of my ideas. I planned to create a scene of a group of children entering an alien-ruled universe on a conveyor belt. The alien creatures (at this point I didn’t know what form they would take) would be drinking pink milk (inspired by the main beverage in a British TV show called “Charlie and Lola” I watched as a child) out of swirly straws. In one area of the piece you would see that this pink milk comes from a group of pink cows that the aliens have taken over and forced to produced mass amounts of this precious elixir, with the help of the children.

With these initial ideas, I had to actually begin making something. I started by getting all of my ideas onto paper. After one of my first conferences with Angela, I soon realized that I had so many ideas, but had no idea where to start. I needed to get out of the abstract and find something concrete in order to begin, and go from there. I started by drawing different versions of the children I hoped to use. I used Henry Darger as my main inspiration, as well as penny dolls, Dick and Jane books, and 1930s style storybook drawings. Once I had the children drawn, I was able to create a new and improved outline that would prove to make the rest of the process much clearer going forward. This outline consisted of a large piece of newsprint the exact size of my canvas that I pinned all of my ideas onto. After adding my initial placement of the children, I printed out pictures of cows, colored them pink, and placed them on my outline as well. I decided that the children should be in a field of flowers with really tall grass, and went from there with my ideas. Since I wanted the children/cows to be appliqués, I had to paint the canvas with the base (a color wash, flowers, grass) before I could go forward. Once this part was completed, I could add all of the little pieces I had put together.

I soon came to a point where I was feeling good about where things were going, but I couldn’t figure out if I should keep my initial alien-like enemy idea, or choose a different “villain” of the story. I eventually decided that the villains should just be other, older children who torment the smaller children. From here, I was able to rearrange the children and come up with a central conflict (the small boy who spilled the milk getting scolded by the two older girls), and the rest of the piece naturally became more cohesive, and tied in this pink milk element that I so desperately wanted to keep in the piece.

My final dilemma was the placement of the cows. It was going to be too much work to put them where I wanted them to be initially, with the smaller children milking them, so I contemplated alternatives. Finally, I came up with an idea that went back to my fantastical roots, but was worried would be too out of the blue: what if the cows were flying? This idea was affirmed by Angela, to my surprise, so I decided that’s what I’d do. This was a decision I ended up being really happy with, and I think it tied the whole piece together.

In a way, this piece feels like an extension of my “I Remember” project, titled “Where’d Tiny Go?”, in the way that it represents a facet of childhood that feels really important for me to explore. A childhood that is representative of depth and complexities; the opposite of this so-called “innocence” many people associate with childhood, an innocence that myself and many others didn’t get the chance to feel. For me, this piece represents the complexities of life that aren’t just limited to when one grows older, but what is experienced by all of us, regardless of age. Of course, children have different, perhaps more “underdeveloped” ways of channeling their emotions, but being a child does not spare one of hardships, the reality of existence, and that humans are imperfect. Many of us, starting at young ages, had to learn how to care for those who were meant to care for us, bear the brunt of emotional turmoil, and observe things that were out of the typical bounds of what a child “should” endure. While that idea is at the centerpiece of the work, I aimed to create a whimsical spirit alongside those darker notes. These things together, create what I imagine to be a more realistic and non-patronizing perspective of a child’s view of the world, which, I think, is something we should seek to understand, and let ourselves lean into a bit more. 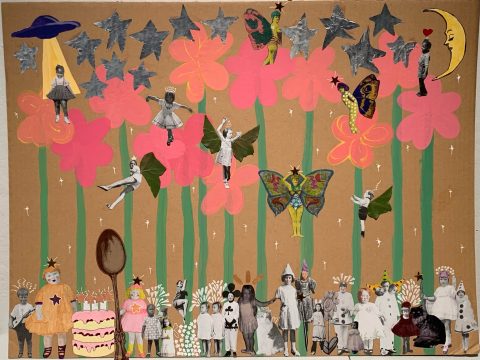 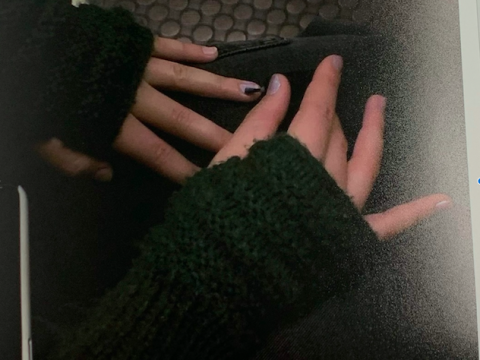