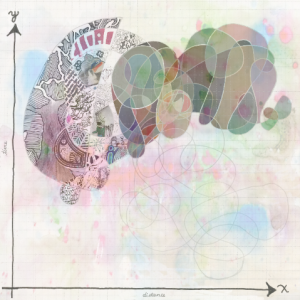 This finalized version of my self portrait is the culmination and self-exploration of my thoughts and emotions. Initially, I felt the need to bracket my experiences and my personality by temporally and spatially binding it. I at first thought, how can I represent myself, when my self changes every hour, ever minute. To address this problematization of identity I thought that the most concise way to “capture” my-self would be to record myself (literally) throughout the space of an hour, as if to say; this is not who I am period, it is who I am this hour. 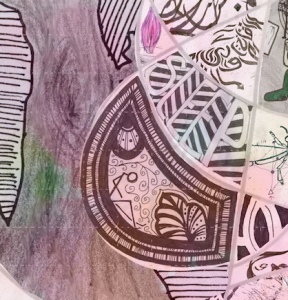 Although this idea of overlay- lines upon plotted points, upon colors, shapes and drawings and words, upon outlines, upon a graph- seemed very appealing to my thought process, I soon discovered not only its complexity, but the “holes” within my depection of myself and eventually the aesthetic overcrowding. 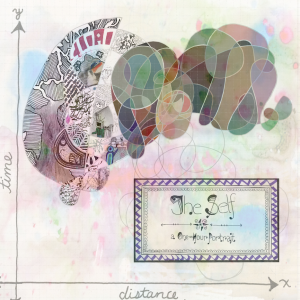 From my first draft I did not alter the layout but simply added too it, filling up the shapes on the left hand-side with text and drawing. It was at this point that I first considered having to alter my over-all plan for the direction of the map. Although I had a recording of what I had been thinking/saying during my one hour excursion through Bronxville, listening back to it, it seemed more disjointed and less indicative of myself than I had hoped. This caused me to make my first change where I decided that the filled in shapes (the drawn and text ones) did not necessarily need to correlare to concrete througts, that rather they could just be indicative of musings, potentials for where my brain wanders. After making this decision, the final choice to eliminate the idea of the one-hour restraint became much easier. Without the restraint, there was no reason for thoughts to correlate with the distance and time graphing. Thus, the drawing and text section became rather a decpition of a week within my mind, working on it daily each picture would inspire either a new thought or a further lead, for me, my personality exists as equally within my desire for meticulous fine point detail as it does within the images and thoughts I wish to bring forth. Soon it became clear to me that in the simplest of ways, the way in which I was deciding to construct my map and consider it was, ideologically, the best depiction of my self that can be given. 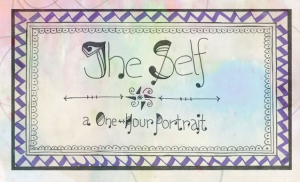 After making this decision the rest of the map seemed to flow relatively easily except for the last part. The part where I thought I was done, perhaps not. I was stuck in a position of fatigue, agitation and loss of inspiration. I had a mass of organic lines forming shapes, just as the rest of my map, lying empty, undulating at the bottom. My first reaction was an instinctual one, I should keep it, it’s the unknown, the potential… where my thoughts can go, but then, something aesthetic overtook me and I felt the need to balance the map so to speak. Engaging in a roundabout game of turntables, I flipped and flipped, 90, 180, 275. Was one side heavier than the other, were the colors causing unacceptable asymmetry? I finally gave into my aesthetic fear, I craved balance, and for that I put in a title. After discussing with Angela however, and getting a artist’s view on my obsession with aesthetic symmetry, I decided to finally choose meaning over aesthetic. Removing the title made me feel like I was stripping myself of a cloak, dangerously naked underneath. The title was a way to explain myself, a kind of shield to protect me from the misinterpreting viewer, without it, the only thing to look at, would be me. Slowly however, I began to appreciate the negative space. It is the possibility. What could be, but what is not necessarily pre-determined, the vague but delicately outlined unknown. This map has been in its own way a cartographic exploration of the self, the map and notions of boundaries between the self and everything else. Where does the line lie between one thing and another so much so that we feel the need to mark it, delineate it, name it- one/two, land/water, London/Coventry, me/you, legitimate/invisible.