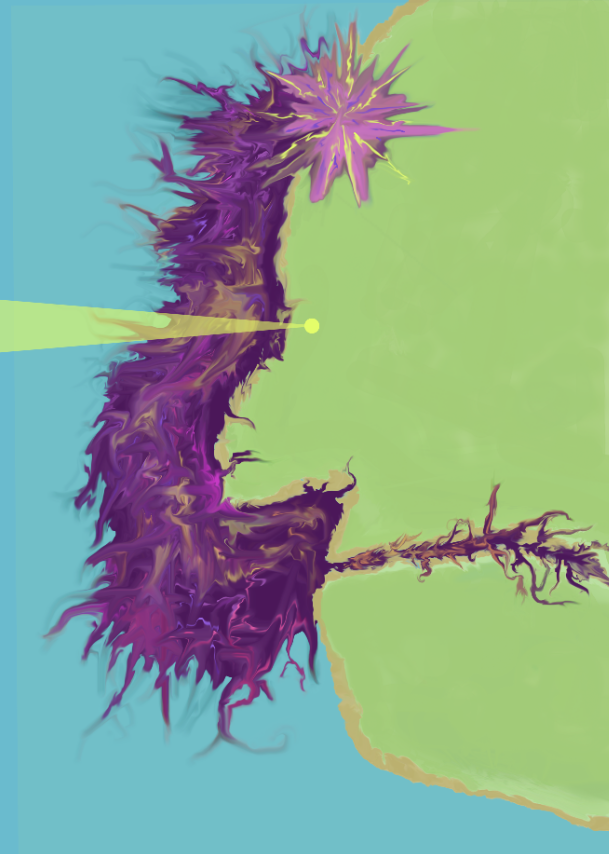 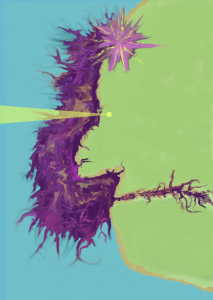 For my conference project I decided to revisit the self portrait assignment from the beginning of the semester.  A cut-and-paste collage method was all I could really manage at that time, and the resulting image was one of the goofiest things that I’ve ever produced. It looked like something ripped from the back of a cereal box, which is not a bad thing, but it was completely at odds with the sentiment behind the image. As much as I might’ve laughed while making it, that project was born from all kinds of anxiety. Before it became a weird piece of birthday card art, it was meant to commemorate my old Self, and to curse my new one. Old Me was chipper and full of hope. New Me is restless and miserable, in a state of endless panic over some imaginary thing or another. In the past couple of years I’ve let these feelings get the best of me, and to be honest I hate what I’ve turned into. It’s coo;, though. I’m working on it. 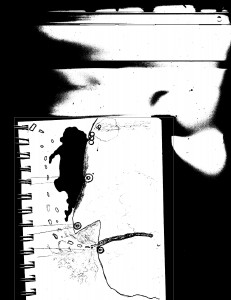 As a second attempt at self-portrait-mapping, I tried to really marinate in that malignant sourness, and illustrate the part of my mental landscape that explains all the weird habitual self-loathing I’ve been getting into lately. I’d already decided to map a coastline, so the ‘pollution’ idea came about almost immediately. Early on I formed a loose metaphorical narrative: Something goes very wrong up at the port, there’s a severe chemical spill, and that spill seeps back into the land, irreparably scarring the environment.

Originally there was the element of boat traffic, so thrown-off by the chemical spill that they bypass the forehead-port and sail right down my mouth. They kamikaze themselves and clog the waterway with more oil/chemicals/debris, as a way to illustrate the anxious person’s internal self-sabatoge. There were all kinds of details laid out for this Self-land — ports, lighthouses, boat traffic, pileups, fire, people swimming — but they looked super out-of-place when I included them. The cut-and-paste collage aesthetic of my earlier self portrait would have felt like a betrayal in this case. The feeling behind this picture and all their enormity would have been instantly trivialized by those visual cues that read “this is a joke.” So while the qualitative value of the map might have suffered (making it less of a map), but I like it better this way because all the interpersonal ramifications of the spill are implied, and attention is drawn to the spill itself. The way that the toxic contents of the nastiest part of my brain find their way down my throat and into my guts. This is more true to the reality of the spill, which is a metaphor for something that I’d really rather not actually discuss. I promise it’s nothing good
Author: cmnfgs