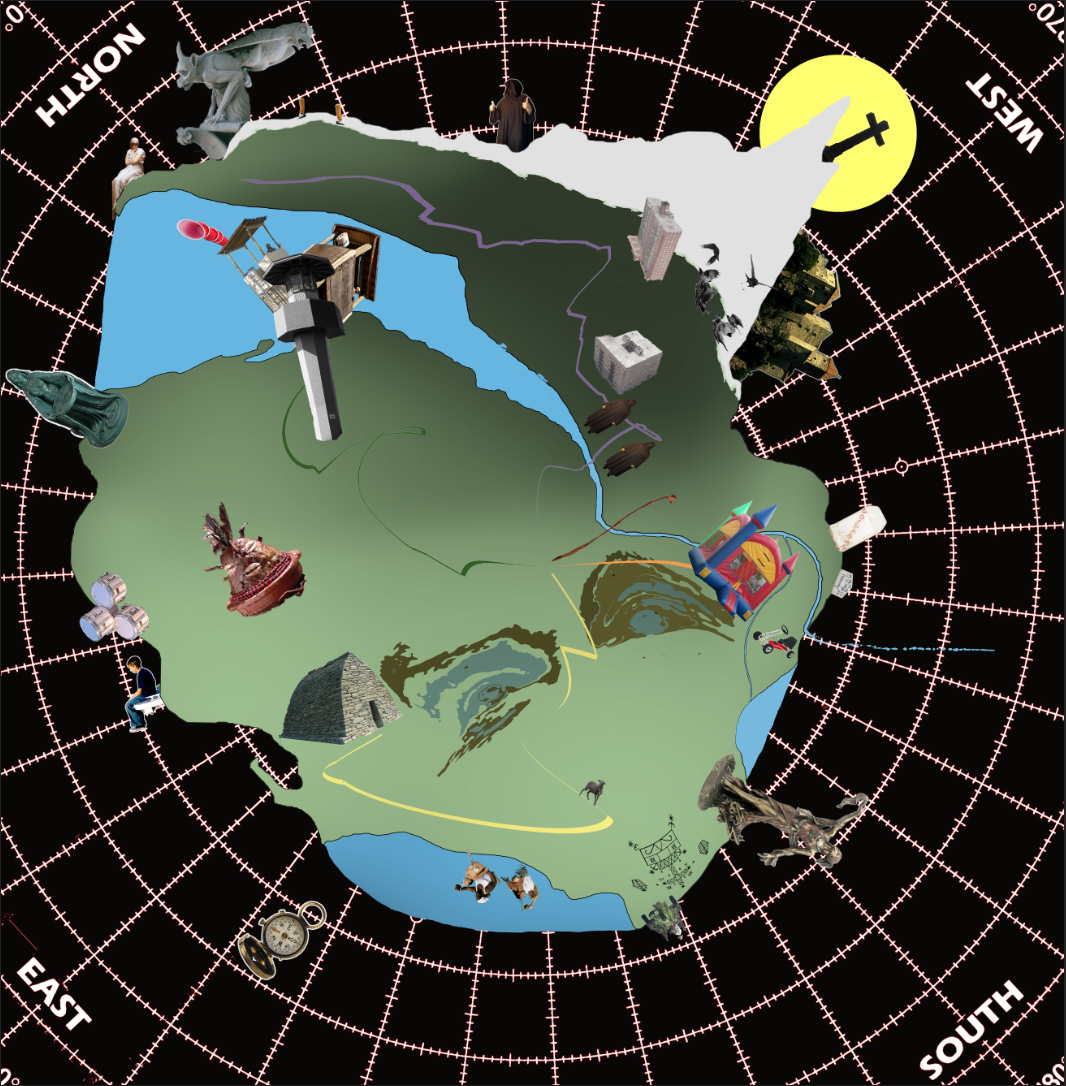 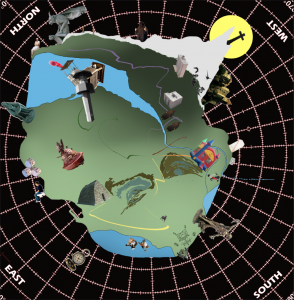 My planetary self portrait isn’t looking so barren anymore.  It’s now more of a goofy collage than anything else, but progress is progress.  One thing that could be tweaked, in addition to the rough edges on the photo clippings and the opacity of the background, is the link between signage and connector.  As a whole.  It’s got to be more cohesive.  The tone of this little environment isn’t going to change much, and there are about a thousand more images that I’m figuring out how to incorporate.  But regarding the analog clock system that birthed this whole project, that could be communicated much more effectively.  The idea was that as you move clockwise from the orange line, the planet transitions from bright, warm childhood imagery (influenced by the secret Caribbean half of my genes and all my abuelita’s weird Santeria mysticism) to something much darker, colder (in every sense of the word) and more horror-influenced.  I’m trying to communicate that I don’t feel any better off for having sat through sixteen years of school, and that my mind was a more pleasant place to reside in back when it wasn’t so restless and cluttered.  Really, this is my rendition of the ‘never grow up’ song from Peter Pan; adulthood is looming, and that’s a scary thing.  My map should reflect this by illustrating a clearer and more dramatic progression from Tropics to Gothics.  This is my goal for the remainder of the project.

For now, though, I’ll give a little tour of the planet in its current form.  The surface of the planet is just that, a surface.  Starting from the orange line, or from the umbilical cord stretching across the Hudson River if you like, life is simple and pure.  A bouncyhouse and a pedaled go-kart.  By fifth grade, school was no longer inflatable or fun; it was a stone prison.  But the warm vibes of childhood were still half-present, at least.  Along the yellow path to that stone prison are the man and the goat that I photographed back in high school, on the side of a road somewhere in Cuba.  Other notable residents of the yellow region include Oshun (who’s basically the Afro-Caribbean Virgin Mary variant), and some nude ladies being baptized in the water (to signify first contact with the metaphysical, as well as the bodily revelations of the middle-schooler).  The region between the yellow and green lines is home to the lonesome little boy staring into space, and another Santeria deity named Eleggua, god of crossroads and something to do with divine contact through drumming, if I recall correctly.  All quite appropriate for my early days of drumming and terrifying uncertainty.

By the time high school rolls around (green line), it’s clear that the stone prison and all its stipulations are totally illusory.  But you’re still bound to them, sort of by law, and you’re constantly being monitored.  I chose to express this by attaching two guard towers to a guard tower, despite there being no actual prison.  This is all happening on the colder side of the planet now, and it’s all watched over by Danu, Celtic Mother Goddess, to offset Oshun’s presence on the opposite side,

The purple line to college runs across the Hudson River, past the black-cloaked Washington Heights Gatekeepers, past mom’s old apartment, past dad’s old apartment and the big evil mountain which I suppose is the Bronx.  It ends at the north pole.  Sarah Lawrence is in many ways less structured than the endpoints of the other three lines, so there is no structure.  There is only a moping gargoyle with a bird growing out of his back, and some cigarette butts and a sad lady from an old painting.  I do intend to build more on the north pole, as well as on the rest of the planet, and then maybe something on the water.  I appreciated everyone’s input today.