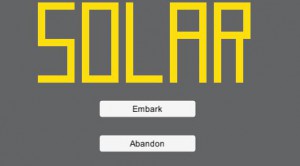 Solar is a project that has gone through many changes over the past few months. Initially I wanted the game to be a Metroidvania game with a timed mechanic that encouraged progression rather than backtracking. The initial concept had the player travelling across the galaxy while being chased by a powerful enemy (who would serve as the game’s final boss).

The player would be required to explore multiple planets in order to find items and upgrades that would help make the final encounter with the boss fair. Since being constantly chased was a core mechanic of the game, the player would have to be efficient with the amount of time spent on a planet and with the amount of fuel consumed when travelling from planet to planet. This is where collecting fuel, in addition to the aforementioned items and upgrades became an important task.

Over time however, after multiple meetings with my professor Angela Ferraiolo, I was convinced that colonialism should be the main theme of Solar’s story. Incorporating this into the game proved to be a lot more difficult than I thought. Colonialism is the practice of acquiring full or partial political control over another country (in this case, planet), occupying it with settlers, and exploiting it economically. So how can this be represented in a 2D platformer like Solar?

The first thing I did was make the collection of fuel the primary objective. The player would have to find blocks of raw minerals spread across multiple planets and combine them to make fuel to power the ship. To ensure that there is never a shortage of minerals, the player can choose to leave one of his crewmates to occupy a planet that holds a particular mineral. This way the player is notified whenever more raw material is available. The consequences of doing so would be made apparent upon returning to a planet the player has “occupied”. For example: Pewhiusium is an element available on Pew-Oria; a quiet and peaceful planet. The residents of Pew-Orian are known to be simple in nature with very little need for conflict as there has never been a shortage of Pewhiusium (which the Pew-Orians consume as their primary source of nourishment). If the player chooses to leave a crewmate on this planet, after enough time passes, and depending on which crewmate is chosen to occupy the planet, the residents of the planet will either become hostile or die out completely. 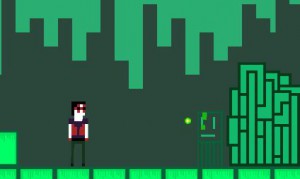 NPC’s currently are passive; only doing damage upon player contact.

As I move forward with the development of Solar, I want the player to realize the repercussions of doing this and have the player’s actions culminate into something significant and of consequence. I have yet to figure out what that will be. I have decided to put a hold on adding more mechanics and focus more on the atmosphere and visual elements of the game as I feel that doing so will help influence the narrative of Solar. I have been hesitant to use blocks of text for exposition and hope to use the visuals and gameplay to tell the story instead.