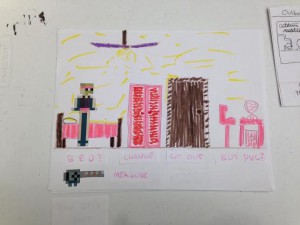 I set out on the paper prototype for ‘Industry Knowledge’ with the express purpose of creating something a little off beat that captured the same form of absence of explanation that the flash fiction “Industry Knowledge” did. The player would spend time doing several recreational tasks such as ‘go to bed’, ‘try on clothes’, ‘shop for PVC’ and then inevitably go out on the town to see how their choices impacted the overall game. While I must admit that the ‘bed’ and ‘shop’ mechanics worked fairly well, I found that the game not only didn’t capture the ‘measuring’ aspect of the story super well, but also relied a tad bit too heavily on short dialogue mentions and didn’t exactly shock the player too much. The game suffered in many ways from there simply just not being much escalation. While it did succeed in being non-linear and using stockings as what Kurland calls the “McGuffin” — that which holds the story together — the game failed in that it could become fairly monotonous once many of the options became exhausted. 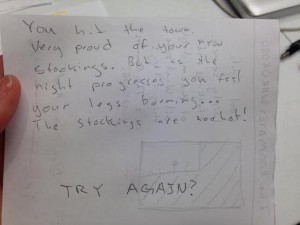 For instance, the above ‘ending’ is the quintessential “good end” of the story, however this ending was drawn first. If I were to edit and retest the game I would likely have the option to buy the PVC that leads to this ending further down the list. This would also aid in adding tension, as the other ‘stores’ would instead feature more calm images than the one where the player can buy the “best stockings”.

The abstraction in this prototype is essentially every aspect of the player’s quest and the results. Nothing in the game is explained and all of the game takes place in one room. Upon further revisions, cut scenes should replace the text based outcomes: this would actually limit the abstraction of text but improve on overall quality.

The aesthetic of the game is new and engaging as it uses fairly basic art and minimal explanation to force the player into discovering the outcome of some fairly basic options. There are only so many options but these options occur semi-randomly and provide a backbone for engaging non-linear story telling. The game lends itself to more replays for better effect and better understanding of it’s various paths. The player can see everything essential to the game directly on the first screen and is delighted through subtle surprises. The game’s overall aesthetic is one that subverts the player’s usually expectations of reality.