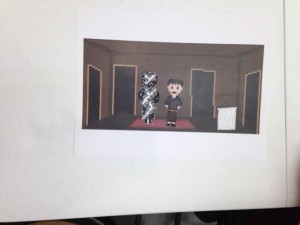 This past paper prototype was made with the primary intention of mapping my game out in such a way that I envision my final game to be mapped out as well. To that end, it seemed worthwhile to explore a far less text based game that dealt more in visuals. I aimed to improve upon Industry Knowledge which used text as a way to tell story. In the second paper prototype, I focused far more on the use of visual space and backgrounds as well as the permeability of several different sprites.

The sprites would change over time which thoroughly helped with players feeling like they had an impact, and the objects in the space were all able to be interacted with. Such objects include: the fridge, clothes, mirror, shoes, gramophone, etc.

The gameplay and story revolved primarily around an interactive mechanic and the McGuffin of the story was in many ways the door that could not be opened and the distortion ghost. The door did not work as well as I had planned and perhaps in further drafts of this game that door could be made either less desirable for a player to enter or alternatively I could make the door begin to appear as the ghost slowly disappeared, this would help tell the story a bit better and keep the player feeling as though their actions mattered.

I feel as though this game very successfully did a lot with a little. I only used very basic designs for all objects and while the backgrounds were semi complex, they only contained the bear essentials to tell the story. 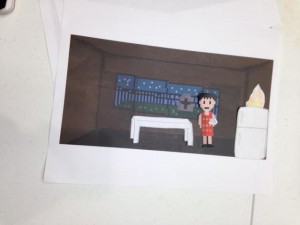 The main challenge to keep note of is how exactly the player will plan to interact with all the various objects as I had not accounted for the player wanting to try to use the ‘matches’ on the ‘chair’ and several other instances of such foolery. In a later update I may attempt to add more results to the player’s various choices with the given items.

– Chris Haehnel on The Stones She Gathered