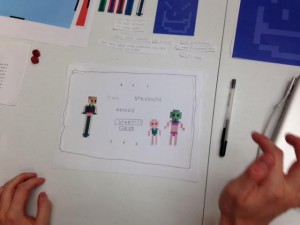 In my most recent paper prototype, I redid one of the flash fiction pieces I did previously. Here, I took PVC and completely changed the game I once had. Taking what I learned from the first two prototypes I developed a top-down RPG based entirely on the flash fiction, Industry Knowledge, and did my best to make the whole game as absurd as possible.

My main goal in this design was to create several memorable characters and make the player feel as though they had real impacts on both the world and the NPCs. I did this through the use of several items that would trigger different environmental and character changes.

The game also had a heavy difficulty spike, presenting the player with the end boss in the first screen. The player, upon walking into the boss would immediately die, sending them back to the opening screen. This screen would have two options, ‘Start’ and ‘Cry’, which would serve to remind the player that this game would not be forgiving of their choices.

The player had complete autonomy in where they would go and what items they would pick up along the way. The various items in turn would change NPC behaviour towards them. Picking up on a note I received earlier, I wanted to capture the narrator’s aversion to the Gas Mask Lady from the story Industry Knowledge as best I could, so I had that NPC chase the player upon entering the Gas Mask Lady’s zone.

The overall aesthetic emphasized minimalism and used only the bear necessities. The backgrounds contributed little but the main details, the character models were extremely vague, and the overall story even did nothing to explain what you were doing. 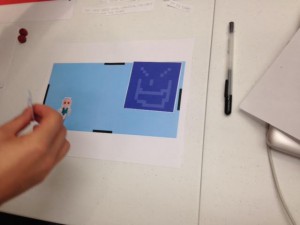 The McGuffin of this story was really the beast. While in the previous instalment I stressed the importance of the stockings, the thing that made this game ‘work’ was the beast that is always present in the main room. You can fight the beast at anytime but it would beat you unless you completed all the tasks to make the perfect pair of battle stockings. This was mostly due to the last quote of the story that I overlooked the first time through: “this gives them the strength they are going to need.”

– Chris Haehnel on The Strength Needed