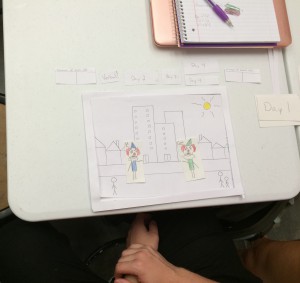 I created a paper prototype for the flash fiction story “War of the Clowns” by Mi Couto.  My first two paper prototypes were off the same flash fiction story, “Possessions” by John Smolens, but for my third one I decided to try something completely different.  This paper prototype is about two clowns causing chaos at first amongst each other and people don’t seem bothered, more like entertained.  Then as each day goes by, the crowd gets more and more into the clowns argument and fight.  The goal of my paper prototype was to cause the most damage to each clown and receive the most coins from all the chaos and fighting. 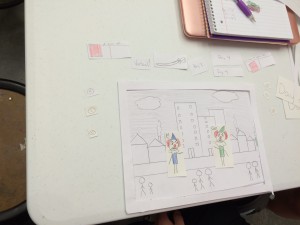 In this image above, it is Day 2 in the game.  More people crowded around, and you have two options of damage unlocked.  The first is verbal attacks and the second is a balloon sword.  You get two turns to cause damage giving you a certain amount of coins from the crowd of people. 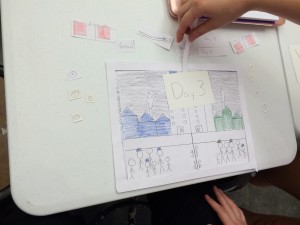 The next image is Day 3 in the game.  The goal for day 3 was to show emotion through the sky getting darker and the houses and people the same color of each clown on each side.  This shows aggression and more chaos created by the clowns.  Also, day 3 unlocks the punching attack or “POW!”. 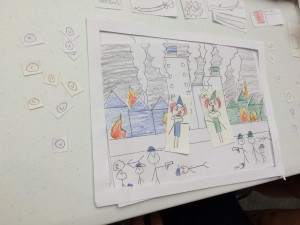 Next is day 4, which I tried to show as much chaos as possible.  The sky is so dark, theres fire and smoke coming out of the buildings, people are dead on the floor and shooting each other and the last two items were unlocked; the stick and the bat.  The more items unlocked, the more and better amount of coins the crowd of people throws. 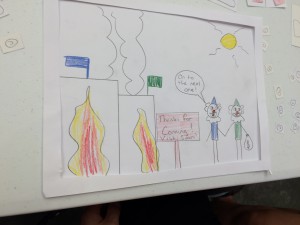 Lastly the way I had my game end was in a ironic comedy type of way, following the way the story itself ended.  The two clowns, who you think throughout the game hate each other and want to kill each other, walk away happy as ever ready to destroy another town.  Another little thing I added to the end was the sign that says “Thanks for coming!  Visit soon!” which is ironic because the clowns destroyed the town and took all the money.

Watching my paper prototype be played out today, it did not go as expected.  I did not expect to get the reaction that I received, but that happens in gaming.  I think I want to test out my paper prototype on some other people before I make major changes because I thought this was my best one yet, but defiantly could use some more surprising and unexpected twists to my game.  One suggestion that really stuck with me was that every time an action is used, instead of receiving the same amount of coins for that action every time, to change it up.  For example, the verbal attack was 1 coin every time, but what could be a better idea is for certain verbal attacks thrown, more coins could be offered than the weaker verbal attacks.  Also maybe change some of the options of color I had used in the backgrounds to keep it more clear, like in day 1 where the backgrounds only color is the sun, gamers can mix that up with thinking its a special button when in my game it actually wasn’t.

Mu use of abstraction in this paper prototype I feel is my best one yet.  I personally enjoyed the amount of color added, I feel like it wasn’t too much but not too little.  I also liked how each day went by, more color appeared not only in the background, but in the foreground where the people were.  This paper prototypes structure was defiantly linear this time, with cause and effect bringing the game to it’s one and only outcome of destroying the city.

My goal for this game if I were to go back and change it would be to make the actions more surprising and unexpected.  Also maybe have the backgrounds change with some of the actions, like if you use the balloon sword it could rain balloons animals everywhere or if you use the sword too much it could pop!