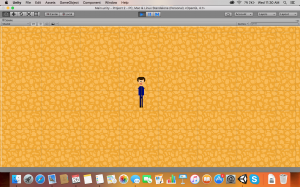 The game I finally made is now called Into The Dark.  The goal of this game is to explore the world I created and to defeat the boss at the end of the game.  There are times were the player will die a lot but that is the only way to fully play this game, is by learning from your mistakes.  How to defeat the boss is to find the power ups in the game, without the power ups the boss will defeat you and you have to start over.

This project changed constantly for me, I do not think I went longer then a few days without changing my mind on something even if it was the littlest fix.  With this being my first game I probably should have not fixed it as many times, but I could not help myself I wanted a good looking game, I wanted the little details and I wanted the game to look perfect, at the cost of time though.

What I noticed went right with this game was the art.  I really enjoyed using Piskel and creating pixel art, it was very relaxing as well as fun!  I loved adding in the details, I worked in 64X64 which took a while to grasp how tiny it was but after a little practice I was able to get it.  What did not work for me as well was getting a story for the game.  I know I wanted something different, and I had an idea, but I just could not stick with it nor could I put it into a game on paper.  Another thing that went right was the paper prototypes that I created for not only this game but other games.  It really taught me out to put the story onto paper and really see what works and what does not.  What was surprisingly easy to achieve was first the pixel art, that came very easy for me which I was shocked because I have never worked in pixels before.  The second thing that came easy to achieve was after a long process of figuring out what I wanted to do, I knew exactly how I wanted to lay it out, where everything would be placed on my map and how I wanted it to look.  The most difficult thing for me was figuring out how to make my game non-linear, I have never done this before and anything that I have done similar to this in the past, was always very linear based.  So to go from a very strong background of being linear it was difficult for me to get the idea of how to be non-linear but I have a better understanding of it now.

When I look at how I worked and how others in the class worked, I very soon was quick to pick up that I was going to be a slow learner at first because I was really the only one to not know exactly what they were doing.  One thing that consumed most of my time was not being able to put the story all together.  Also, the tutorials I had to keep watching over and over again until I understood them, and they were not short videos so that took up a lot of time as well.  Now looking back at how I worked, next time I will defiantly start watching the tutorials as early as possible so that way I can watch the tutorials one at a time and then do the work with them.  Also, I have a better understanding of non-linear thinking so I think if I did something like this again I would be able to think of a story faster.

I think my final work that I have to present looks good, it is not much, but what I did try to do was make it look as good as possible.  I spent a lot of time correcting details of objects until I got them exactly the way I wanted them, and then sometimes I would still go back and make edits.  Some alternatives I tried were for example taking one tile I created for the ground, and for a different scene change the color instead of making a new tile.  It saved time and it tied in the two tiles.  Another alternative that I tried was watching one tutorial and working with the tutorial as it plays in the background, this helped a lot so I can watch what the tutorial did and I could follow along. 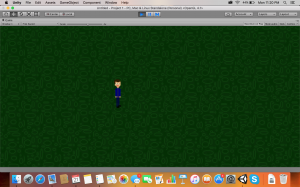 In the beginning I would definitely say that my game was barely non-linear, but after hearing other peoples critiques, other peoples games and examples I started to understand the concept of how to make a game non-linear.  I would not say mine is the most non-linear but I think it is non-linear.  For example, with this wishing well you would think it should be put next to the house, but no its in the forest, and it is not your ordinary wishing well.  Another example is the trees in the forest are the shape of any other trees that you have seen, very different and weird but a good weird.  One of the readings that I got inspired by was Garden of the Forking Paths, I really enjoyed reading that and I felt very inspired after reading it.  Even though this was not a reading, the movie Toto also gave me some great ideas on how to have a non-linear game narrative.  I thought the movie itself was really good as well as giving me some ideas for my game which was very helpful.

I can confidently say that have other sources of input and ideas really helped me a lot.  For example, when we had class critiques it was great to see how everyone played my game.  It was a great way to see how the player would grab the concept of your game, wether they got it or did not.  Also, the feedback was great and very helpful, it gave me different thoughts about my game instead of my own.  Reading other non-linear stories, watching non-linear movies, seeing different artist styles, other peers helping me with new ideas could not of helped me more, it was a huge part in my game being created and I think it is the only way to get a great game is if you have a lot of sources that go into it. 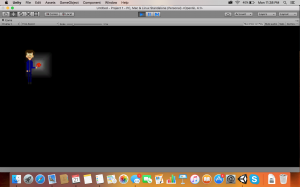 Some changes that I made after my playlets were starting with the terrain.  It had good potential at first, but it needed more, it needed to feel more like a world and less like objects got placed onto a map.  Another one was to fix some coloring in the world, having my main character lay on this very yellow tile, the character slipped away into the tile.  You could clearly see his clothes because they were very dark, but his skin disappeared so the main tile had to be darkened.  Another change was that the well was not only moved into the forest to be an unexpected surprise, I also turned it into a room.  It is very unexpected and exciting to see that you can go into the well and find what is inside.

How my game was coded, starting with tile maps, what not an easy start, like I said before I could barely get a story together let alone the art together.  But the tile map was at first intimidating because there is a lot of pieces to a tile map, and I mean that in the individual tiles themselves.  After you get the hang of the tiles, it is so easy to use especially in Tiled.  Tiled made it easy to create a map and just bring it into Unity.  Next, the animation I did not get a chance to get to, but I got really inspired by other peers work, especially with fading in and out of entrances and exits.  When I say fading I mean adding a fade to black every time a door way was used.  Another animation technique I wanted to try was having an animated character appear out of nowhere, for example pop into the screen from the sky.  Next, collision was a lot of fun to use and after I understood Tiled, collision became easier.  It was hard to decide where to put collision and where to not have collision but collision itself is a great tool and really adds a lot to the game.  Lastly, dialogue was something I was unable to incorporate but I would like to think that I added dialogue in a visual aspect instead of actually writing out dialogue.  The emotion and feel of parts of the game can tell its own dialogue without me needing to write it in.  For example, the character is happy and walking around a colorful world, it is a happy environment.  Then you look at the boss, it is dark and creepy with an evil look on its face, it is an unhappy environment.