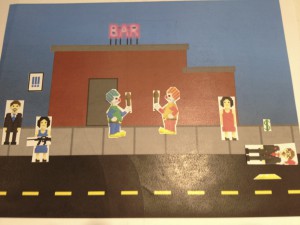 I created a paper prototype for a game adaptation of Cuomo’s flash fiction piece “War of the Clowns.” In the game, the player controls the actions of two clowns with the goal of attracting the attention of a crowd and inciting violence.

The player chooses between three possible actions for each clown: insult, trick, or fight. Upon choosing an action, the player must successfully complete a rhythm challenge to achieve the desired effect. Insult and trick actions attract the attention of passers-by and generate loyalty to a specific clown. Once passers-by become loyal, the player may then cause the clowns to fight each other in order to incite violence. 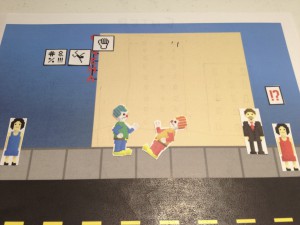 I used quite a lot of visual abstraction in this prototype: icons to represent actions, exclamation points and/or question marks to represent passer-by reactions, changing clothing colors to represent loyalty, etc. I intervened in order to make the game non-linear by incorporating several locations in the game and allowing the player to access the locations in any order. The player also has choices regarding the actions of the clowns. This non-linearity expressed the story by portraying the clowns as roving agents of chaos. 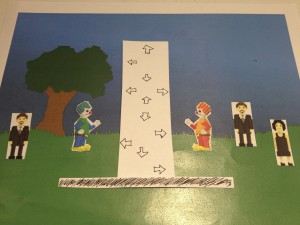 I believe I used minimalism effectively. The game contains essentially three sprites that vary in color, three locations, and half a dozen game objects. The player knows exactly what’s important and can easily observe the consequences and collateral damage of their actions because of the minimalistic design.

My greatest room for improvement, I think, is in the game’s aesthetic. Although I’m happy with the art considering I first forayed into pixel art about a week before creating this prototype, the game aesthetic isn’t particularly new, creative, or original. My goal for my next prototype is to develop a more unique aesthetic that serves my narrative. 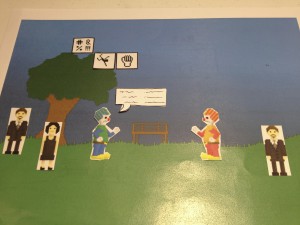