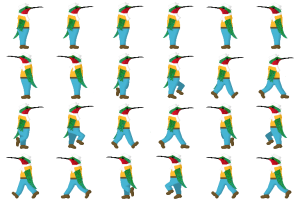 My goal for “Migration” is to create a 2D side-scrolling RPG based on exploration and interaction. I’m aiming for a whimsical, fantastical aesthetic reminiscent of pages from children’s books. I will express the narrative purely through visuals and won’t rely on text or symbols. Movement and interaction will be the sole mechanics of the game. This will emphasize exploration and action, the two essential elements of the game. 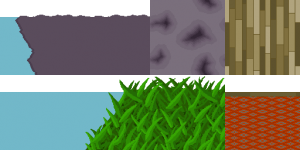 The player’s actions will influence the game world, and the player will understand their role in the story through the changes the witness in the game world as a result of their actions. The ideas of breakage and repair will function as central themes of the game. One non-linear technique this game will make use of is central trauma: the player, and anthropomorphic hummingbird with a broken wing, helps other anthropomorphic animals to repair damage in their homes. At the end of the game, these other animals reward the player not by literally repair the broken wing, but by constructing a hot-air balloon for the player, thereby restoring the player’s ability to fly.

The visual art may be the most important aspect of this game. I’ve chosen to create sprites in 128×128 pixel resolution—higher than we often see in pixel-art-based games—because I see that level of detail as necessary for the creation of my characters. I created early prototypes of sprites in 64×64 resolution, but quickly realized I would need a larger canvass to properly enliven the characters I imagined in my sketchbook. Developing my color palettes was also an essential part of developing the visual aesthetic of this game. Animating with bright, expressive colors that avoid garishness is important to this project.