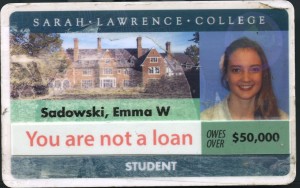 This project really began this summer, when I began really wondering how I was going to face the Armageddon of graduation– how my liberal arts degree could possibly suffice to pay back my student loans, or how my NEED to become an artist would end up impacting my financial stability.

Here’s a post I made to the Student Loan/Debt Awareness Group we have here at SLC, and my initial reasons for this project:

“How coincidental I join this group, moments before taking out another huge ass loan from sallie mae for a final semester….

This debt is larger than credit card debt in America?!

Hundreds of young adults are graduating to the “promise of better futures,” either a gigantic monetary lie in the first place, or in the case of our powerful education at SLC, we run along to the next career path (such as a masters, which will cost more money) or we jump right into years spent working under someone else as a measly intern (while also making no money) or scrap it all and move back home. I see a gigantic miscommunication somewhere along the line, where our generation was fed into the “way things work now” before really being able to think about it. And it’s not our fault, either!

Admittedly I am not as connected to the “real world” of what’s going on in America as I would like to be– last I heard Warren’s bill for the “restructuring of loans” (?) was turned down by the Republicans…
and now I’m banking on deferring my loans as much as possible while hopefully not incurring massive investment charges until either a) those in power get their heads out of their ass holes or b) there is a gigantic environmental incident that absolves all of these financial worries, but regrettably extinguishes our lives.

But it doesn’t have to be this dire.

For instance, I would love to teach in city schools, or teach overseas to allocate some governmental funding to those darn loans, but I would prefer that those who represent me, meet me in the middle. I believe that’s how relationships should run. Besides, I already worked my ass off for 4 years and deserve a lil relief, damn-it. Plus, having to factor in the additional “extracurricular” years that keep one from the current plans of working for themselves, is not what I was promised in my time in my insanely inspiring, insanely creative institutions. It’s up to us, and those who said that we can do anything we want, to find a workable solution.

We can make our voices heard.”

Always been one for solidarity.

I was really into ideas of commonality across this campus, what object we all have and use everyday, the somewhat divergent beliefs that make our school so great. Indicated in my one-card idea sketches: 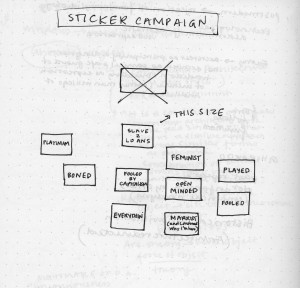 All of that energy took a platform once I heard of the sticker project. I had been futzing around with big banners that said things like “Just Do You,” or other little positive nothings, but I had been dying to make more of a politically charged statement, one that would align with my somewhat frustrations of being “stuck” in this institutionalized space. So I grabbed my one card and scanned it, made a statement about how this place “played me.” 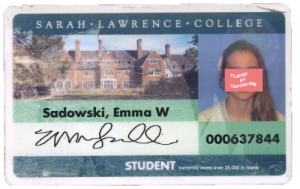 After I got that out of my system, I realized how widespread my sticker could become. Instead of concentrating on my own petty frustrations, I wanted to make it more widespread and gain some traction on this issue that a large portion of us will all be facing. Because after all, everyone has a one card, and most of us have a large amount of loans to pay off. How could transforming a visual means (something we all have in common) demonstrate a stand together against a bigger issue?

Down the line, and in our class critiques, I made some key edits to the design. For instance, making sure each face was seen. Using the invaluable space of the signature and our student ID numbers to make a more cohesive layout. Changing the font to something that aligned more with the initial design of the id itself, and adding a more poppy color. 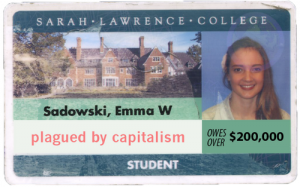 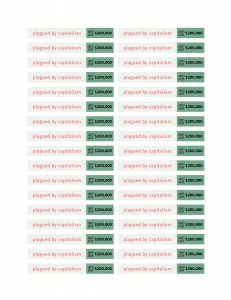 I posted my project to my Facebook page, and the Student Loan/Debt Awareness page to spread awareness and assemble my army, and it was there that I discovered that “played by capitalism” seemed a little bit whiny and away from my point. That’s when I changed the text to “You are not a loan.” 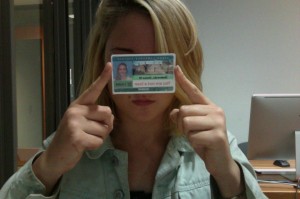 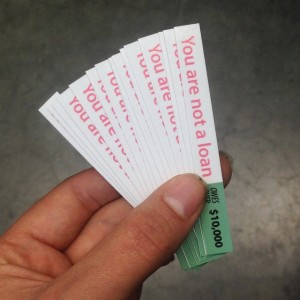 I’ve already spread my stickers to at least twenty people, but in the coming days, I hope they will be spread campus wide. It’s already very exciting to see what dialogues are coming my way, how incensed and inspired people are to participate.

I’ll be posting images of my army as they come.

The big question I have left, and what I hope arises from this, is what next. I am all for standing together, but it’s my hope that we can march towards the “governmental fat cats” that are causing these economic issues in the first place, and say “HEY, THERE’S NO WAY I CAN PAY THESE.”