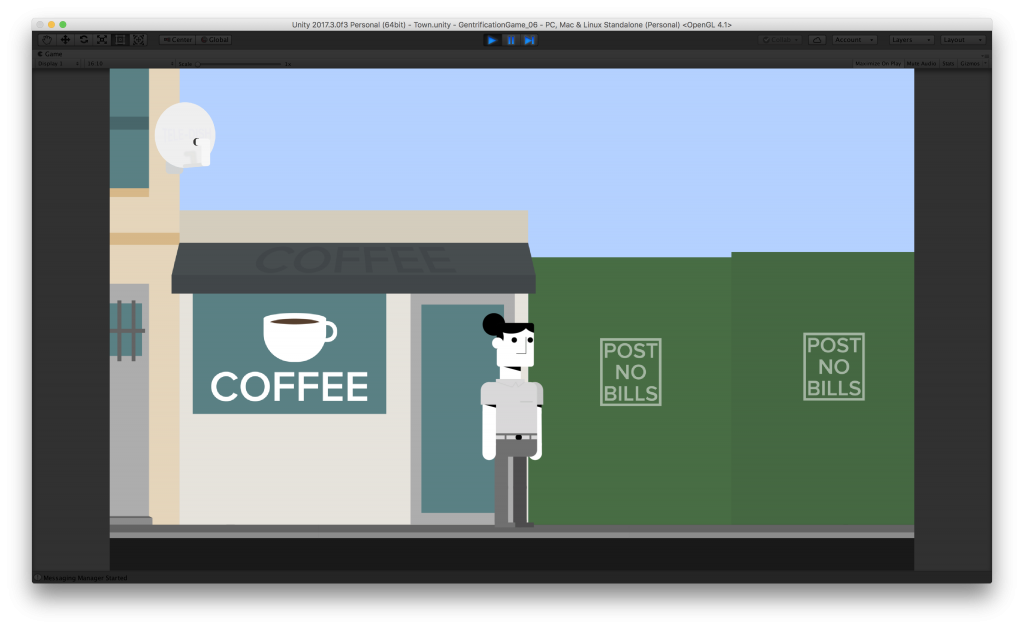 What’s the game about?

Gentrification is about a player moving to a transitioning neighborhood. They just graduated from college with some student loans to pay off and they got a job in the city. Now they’re moving to an affordable neighborhood near their job – their goal is to get an apartment.

Where did the idea come from?

I grew up in New York City until I was nine, on the Upper West Side and in Harlem. I moved back to Harlem a few years ago, and it was crazy how much the neighborhood had changed since the last time I had been there. All of a sudden, we had a Whole Foods moving in down the street, a climbing gym moving in, and fancy coffee shops popping up. It’s the process of gentrification in action.

I was at a bookstore (in Harlem, coincidentally) when I found a book called “In Defense of Housing,” by David Madden and Peter Marcuse, that talks about the underlying causes of gentrification which I found interesting and which got me thinking about using it as a subject for my game.

How is your game radical?

My plan for my game is to build a simple and relatable environment in which the player’s goal is to get an apartment so they can begin to work (and begin to pay off their student loan). Through interactions with NPCs and the environment, it will become clear to the player that by taking the path of least resistance – simply renting an apartment – they will be at odds with the best interest of the neighborhood. They’ll be taking part in and perpetuating the gentrification that is negatively impacting the neighborhood and the community. 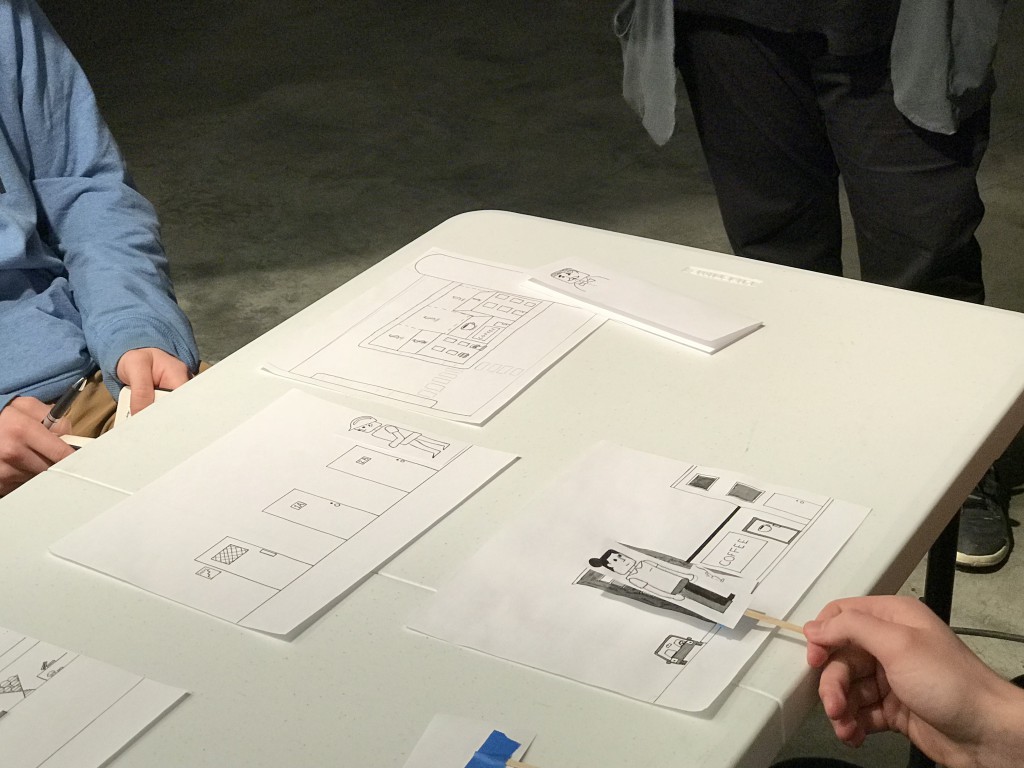 How did your paper prototype play?

The paper prototype played well. I was very informative to see my idea for the game having been physically built. And it certainly helped to see my game through the eyes of potential players.

People responded well to the game design. The main feedback I got was that there wasn’t a clear enough idea of what my game was about. The class was able to figure it out on their own but it took some teasing out for them to get there. Moving forward, that’s something I’d like to pay special attention to – making sure that the directive is clear at every point in the game.

My initial plan was to make the game with a black and white color palette but in the play through, someone suggested trying it with color.

The third main feedback I got, was to give my NPCs a point of view, driven by some motivation in their interactions. 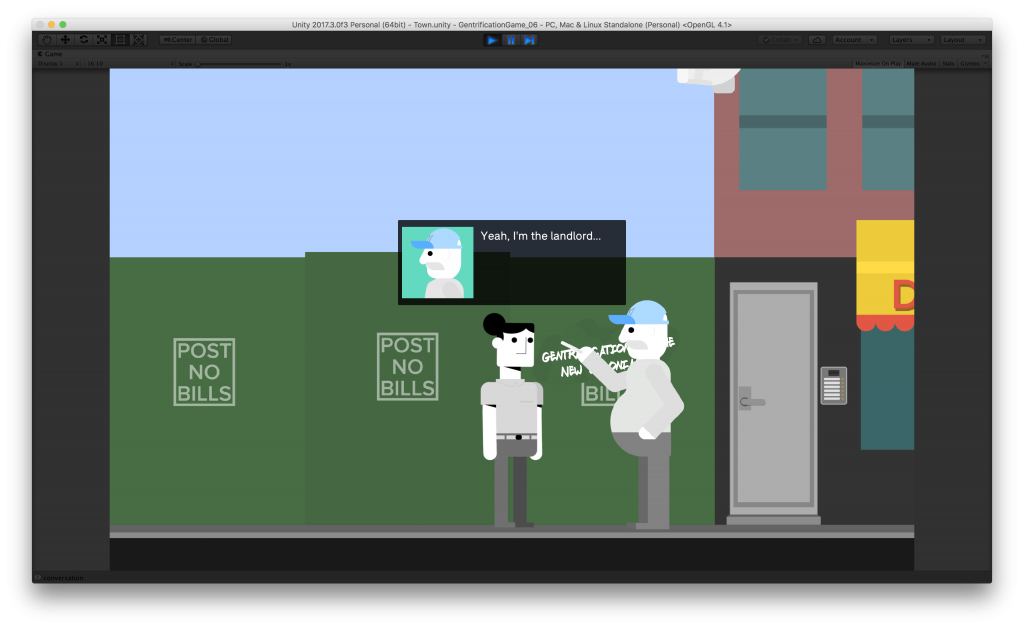 What are your three NPC encounters in level one?

In level one, I’m planning to have my character encounter an apartment building owner from whom he can rent an apartment, the owner / manager of a new hip coffee shop that just opened up, and the owner of a corner deli whose family has been in the neighborhood for several generations. 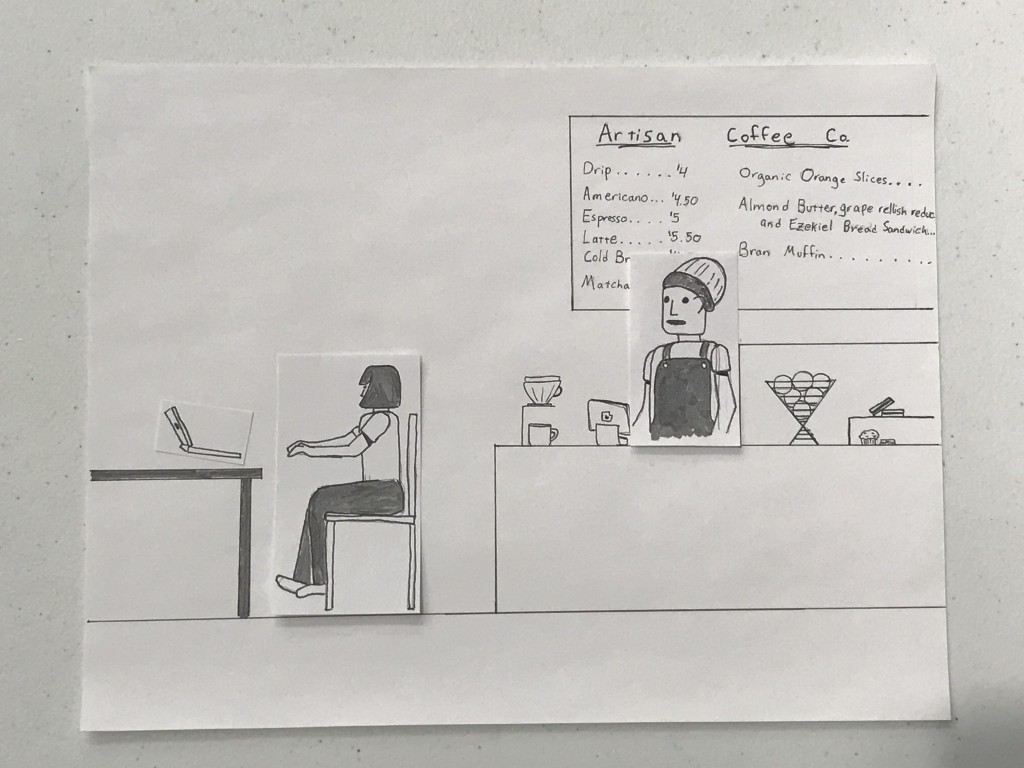 How did these encounters express your game idea?

Those three characters all experience the gentrification of a neighborhood from very different perspectives. Each plays a different role in the community. And each will be affected differently, and each has a different motivation.

The apartment owner has already been a part of the community but will want to take advantage of the trend of increased demand for his apartment and will probably raise the cost of rent.

The coffee shop owner is new to the area and is looking to capitalize on the influx of a new demographic of people to the neighborhood – one willing to pay extra for their coffee if it comes with a certain atmosphere.

The corner deli owner’s business may be threatened by the wave of gentrification.

How do your game encounters support a help and hinder paradigm in your design?

The player will have to decide for themselves how they choose to act, while progressing toward their goal. Their actions will either contribute to the gentrification of the neighborhood or they will help to support the community.

Characters like the coffee shop owner or the apartment owner benefit from the gentrification of the neighborhood. In interacting with them, the player will be pushed toward a simpler path to the goal of securing an apartment to live in.

Only by talking to other characters, like the deli owner, who don’t necessarily benefit from gentrification, will the player be able to find a path to their goal that doesn’t contribute to the gentrification of the neighborhood.

How is your game build progressing?

The build is coming along well. I have most of the art completed for the level. I still have to make some animations for my NPCs and background elements of the city in the distance. The code seems to be coming together well. 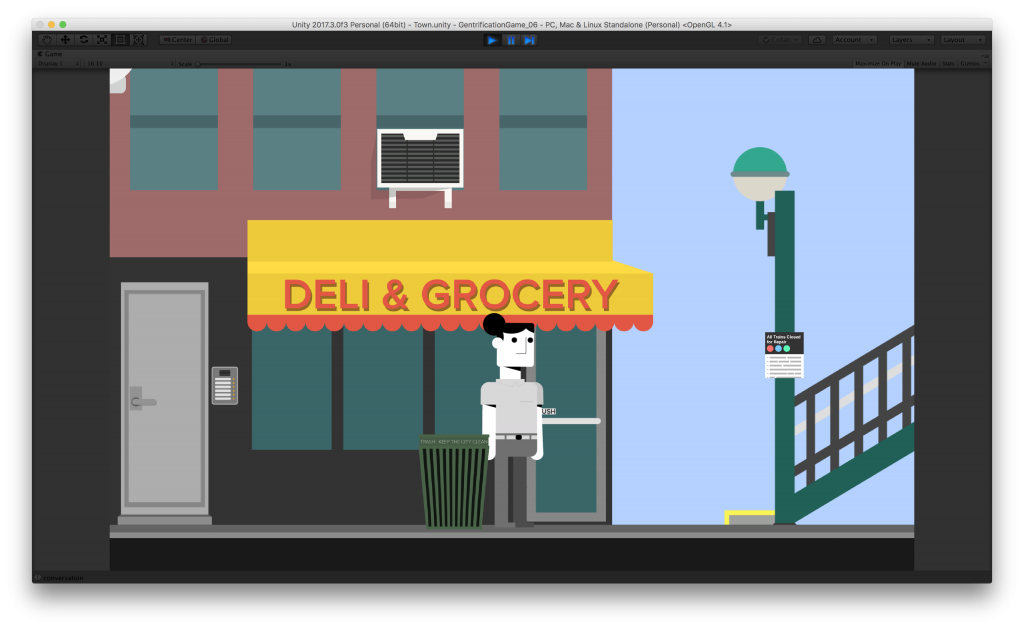 How are you using color in this game?

After my first paper game play-through, the class suggested adding color to the game. I played around with it and I like the result – though I’m still nailing down a clear color script that will clearly define my character in relation to the world around him.

Still, for now, I enjoy working in this simple palette; I think it gives the city a cool feel.

What was the rationale behind your level design?

I liked the idea of making a 2d side-scroller, set in Brooklyn. I think it sets up a lot of fun opportunities to design fun maps.

So far, I’m trying to keep a lookout for where I place the buildings I design and what that means for the community I’m creating, in doing so.

Where in your elements did you intervene to make the design of the game unconventional?

My ultimate plan for the game – although it may be a bit beyond the scope of this class – will be to add a bit of a fantastical / supernatural element to the third act. The evil that’s truly causing the gentrification to take place has its roots in the city (literally) and I plan to hint at this throughout the first and second acts of the game. 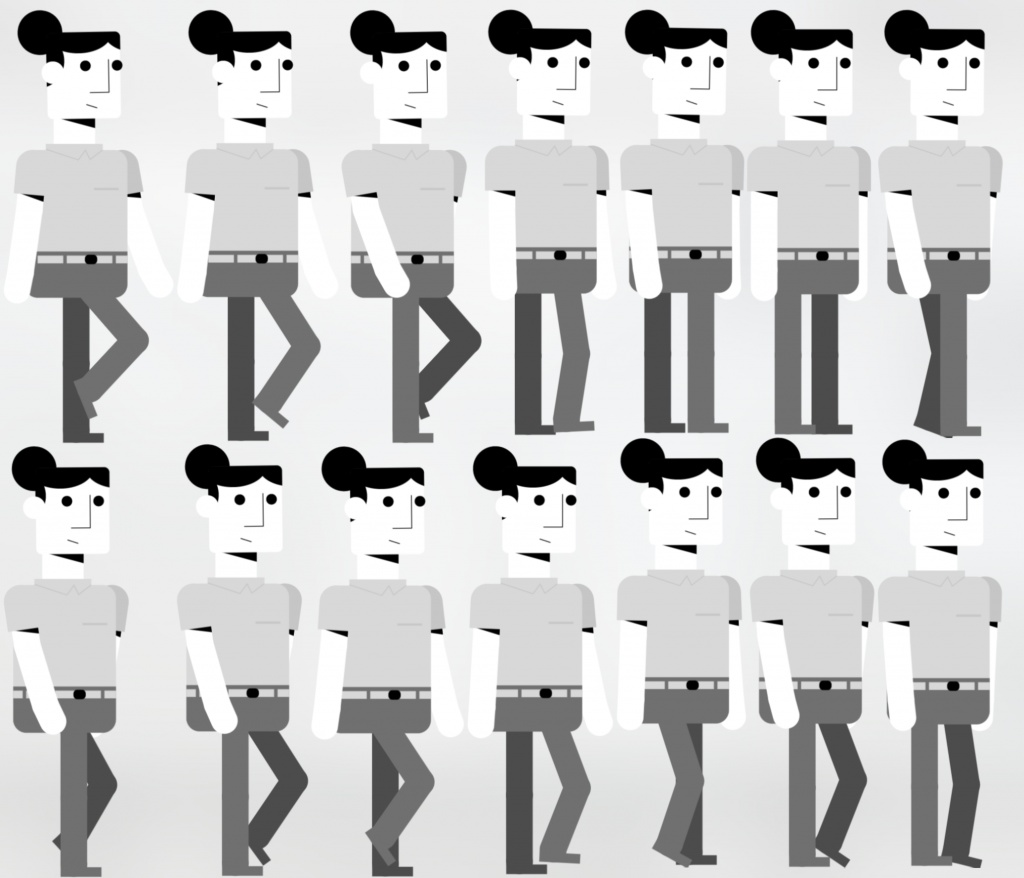 How does your game ‘say a lot with a little?

Visually, the world I’m creating is designed to be simple and yet expressive. The characters are minimal and yet have enough details to convey a sense of who they are and what their relationship to the environment is.

How does your design act to express your theme or story?

If all goes as planned, the environment that the character is moving through will change and respond to the decisions that the player makes. If the player doesn’t consciously make decisions that will strengthen and benefit the community, they’ll see the level changing. 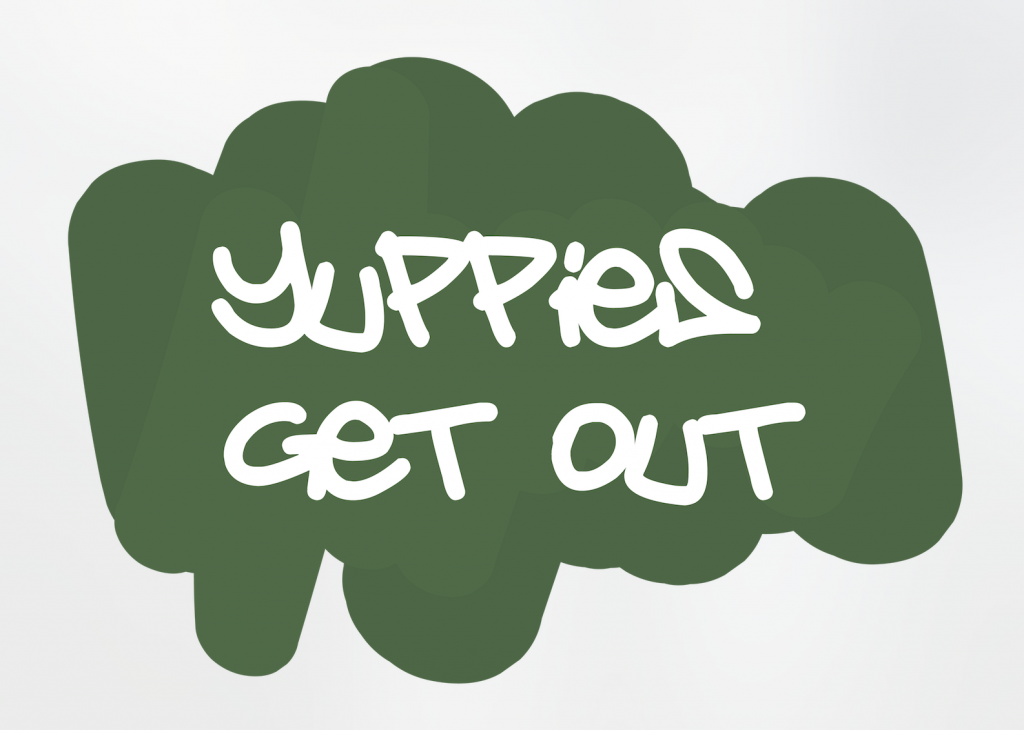 As an example, when gentrification rises, you’ll start to see tags disappearing and being replaced with commissioned art.

Can the player see what’s important in this early level?

The player’s goal – to rent an apartment without contributing to the gentrification of the neighborhood – will be very clear in this level. NPC interaction will be the biggest way in which I can make that happen.

How does your aesthetic emphasize emotion?

The goal of my game is to make the player aware of the negative impact gentrification can have on a neighborhood, help them to understand what causes it and what can be changed, and to empathize with the people who are impacted by the changing community.