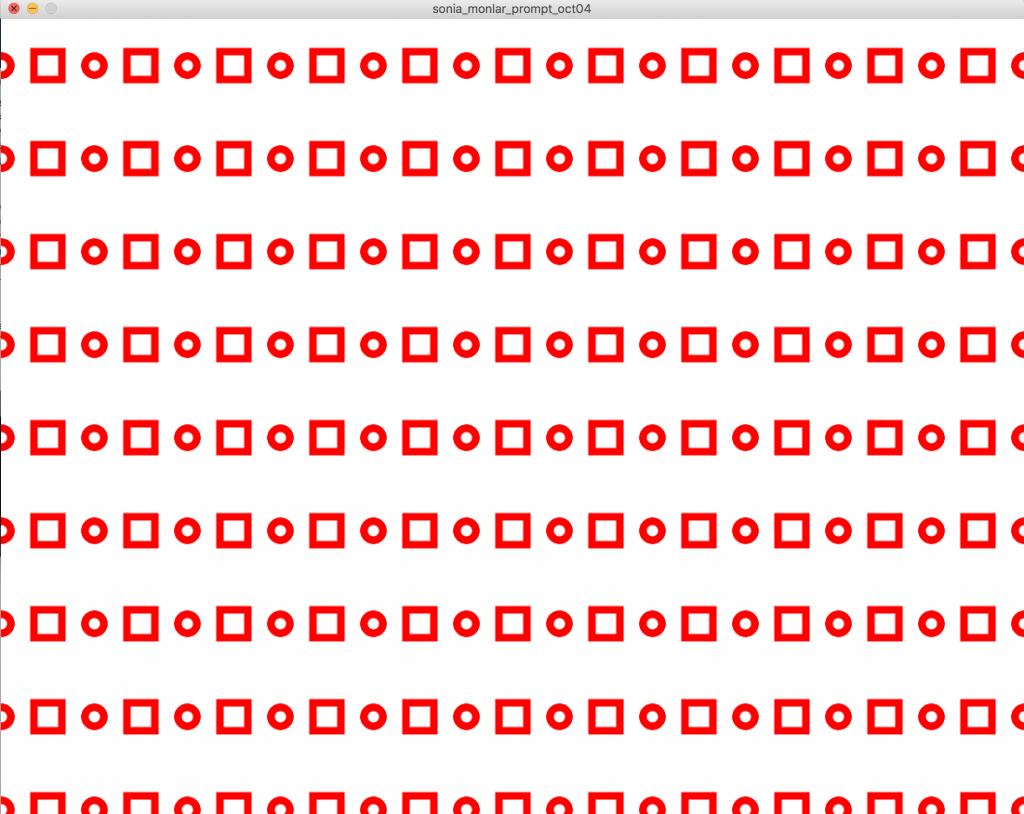 I wanted to start off with a basic that gave me a real sense of symmetry and piece. Very much like how Molnar start off with her designer. The code to make this was really simple, just a a triple loop, which didn’t even have to be that complicated but I make it that way just to make my life more difficult and an “if” and “else stamens to make the 2 different shapes alternate. I wanted the shapes to really pop so I made the strokeWeight really thick (8). I also wanted the repletion to still be interesting so I changed the shape of the ellipse tp be smaller 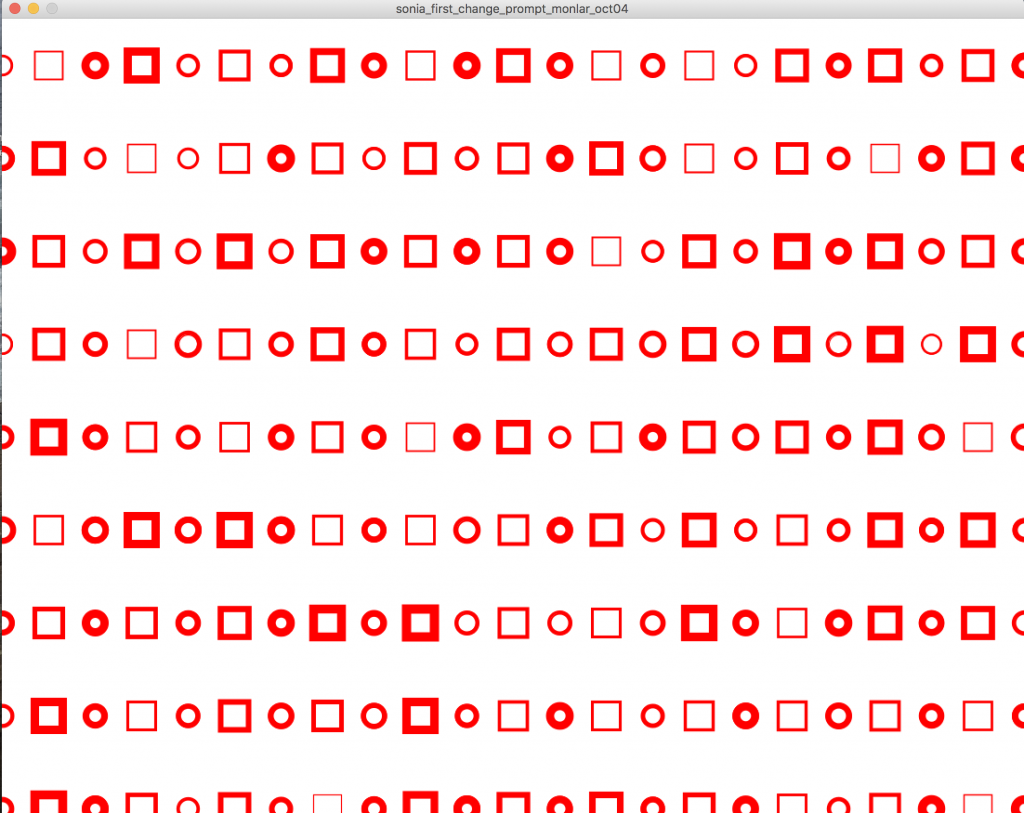 My first change had to do with the strokeWeight of my shapes. After looking at Molnars work and reading about how she likes to change her designs I found that a lot of it has to dow with randomness. I found this to be interesting because we can tell when something is hand made by the fact that it have random imperfections in it because making something perfect is impossible. When I think of a machine, or a computer, I expect every line to be perfectly straight and every circle to be symmetrical. What Molnar does is break that and asks as if her computer were her hands and wants her piece to provoke the same emotion as any piece of art not made by a computer. 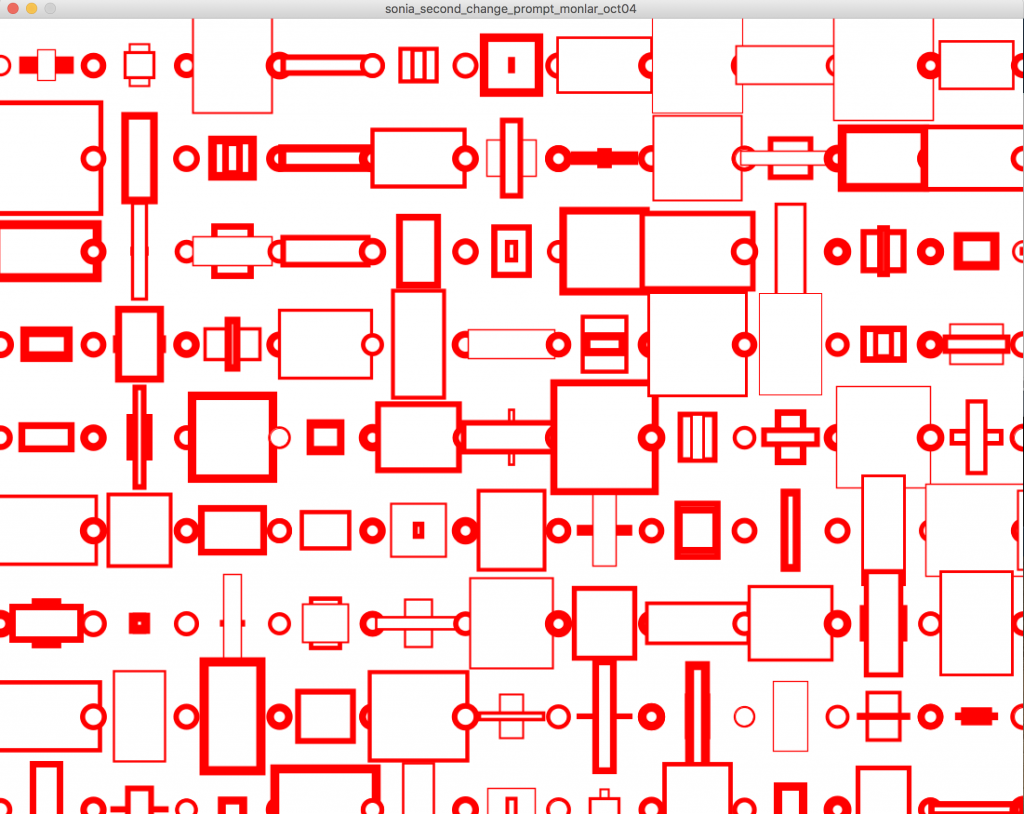 In this image I continues my randomness and set the height and width of the rectangles to a wide range, between 0 and 20. I wanted this to be exaggerated just for my personal preference. Having not coded for very long its satisfying to see a big change actually work the way I wanted it to 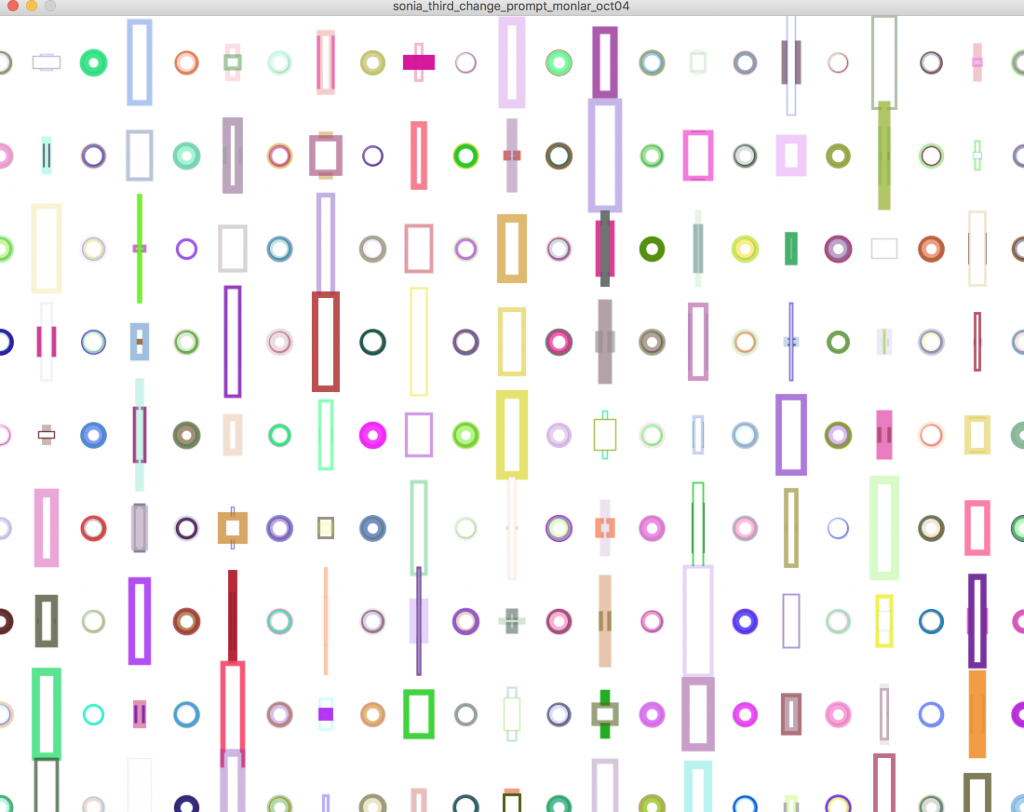 In this next frame it is a log easier to see what I changed and randomized. The color and the transparency of the colors of both shapes. Once again random and once again just for fun. Similar to Molnar we  my understanding of her is that repletion isn’t in how or what she changes in her paintings but the processes she takes to get to her final product. And like she mentions in TOWARD AESTHETIC
GUIDELINES FOR PAINTINGS WITH THE AID OF A COMPUTER, it doesn’t always work and not like on paper or making art by hand she can always go back and erase what she want. I was very grateful of this tool when making my own piece because many times I made a change and hated all of it. Molnar mention that sometimes it would take hours for the image to appear but luckily for me that isn’t the case at most it would take a minute. 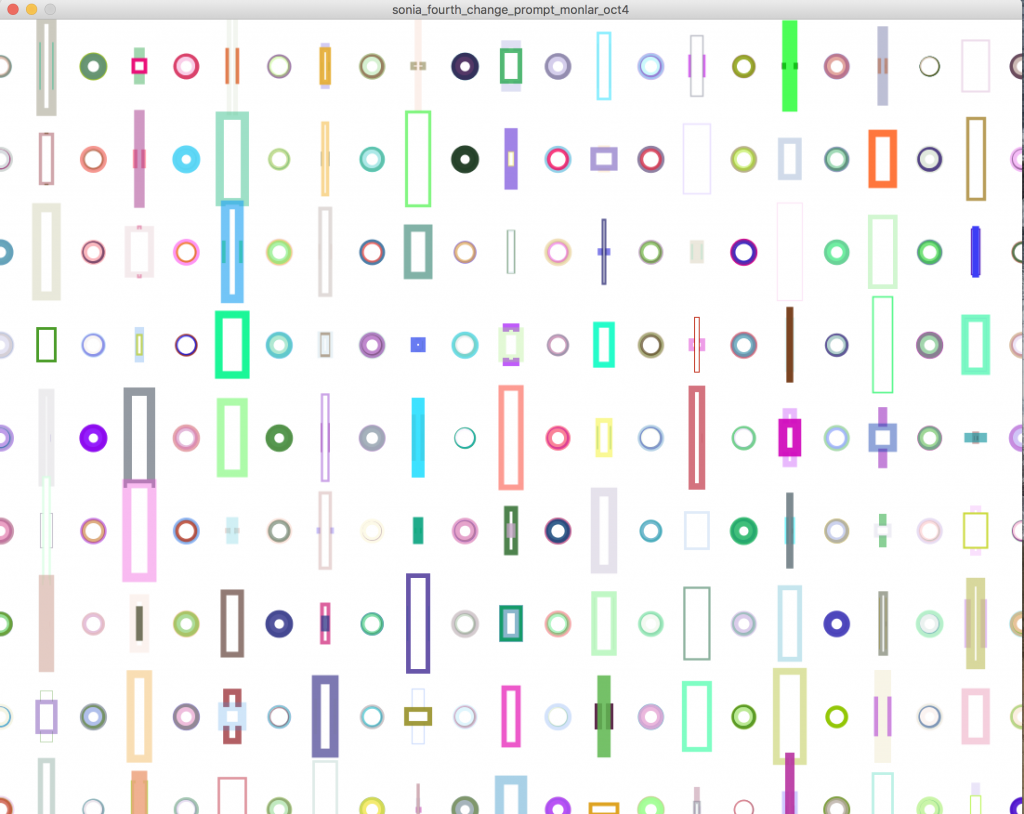 In this frame I think I look it a step further than what Molnar would do because I added interactiveness to my my code by make the mouseX and mouseY movements also by. making my code active I realized that my colors would change in ever many seconds. While doing this I saw the benefits on Molnars method. It can really be applied to so much more than art but to everyday life issues. Her idea of starting off with the most simple and basic art and then one step at a time changing it to her favor. It shows effort and real intentional  strategy . Although not everything she doe is intentional she knows what is being changed and even if it is random she still has a mental image of what it could look like. This can be applied to so much more than just art but to any issue.  I could apply molars method to different conference work that I’m doing. By starting with one subject and really dealing into what it is and then constructing my own thesis and opinion on it by altering the ideas given to me, one step at a time. In computers everything is about repetition, every math solving problem has to do with Molnar method. With every math problem I have every done it always starts with putting numbers into the formula. Once that is done then the act of repetition comes in, taking one part of the formula and calculating that to see if it works with the first part, and sometimes it doesn’t much like in art, and if it does we do the same with the next part of the formula to see if it fits with the previous part. Computers have their own language that they use to increase the speed  for any job  they do. They use repetition to identify sentences of code and use that to make what they need with the least amount of explaining. But every code has more code within it. They set up containers and identify number over and over again so that their outcome can be as simple as possible.