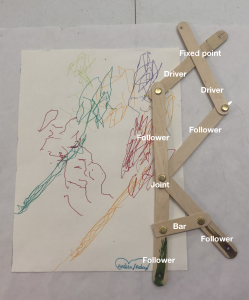 My experience so far with machines as an expressive medium has felt like an extensive power struggle between my creative vision and the artistic limits of the machine. I harbored a lot of frustration and agitation towards the simple mechanisms we created in class before I understood that there was an extent to which I had to surrender my expectations and experiment with the mechanics of motion exchange between craft sticks to eventually produce a drawing. Once I overcame the discomfort of not being in total control of my work, it was actually liberating to freely collaborate with mechanical motion in pursuit of uninterrupted creative expression. I consistently ran into obstacles with positioning and linking craft sticks because I lacked a basic understanding of simple engineering concepts and the exchange of motion. For my first project, I collaborated with Adora. We struggled for a while to develop a drawing machine that allowed our markers to comfortably glide across the page. We grappled with movement that was either too limited or too free for our own liking. We eventually settled with a mechanism consisting of a single fixed point, two drivers, two sets of followers, and a joint. I was struck by how gratifying it was to push forward motion (input) and watch the trajectory of the output motion knowing there would be disparity between the two. I also challenged myself to illustrating a nude woman, shown to the left of the mechanism. 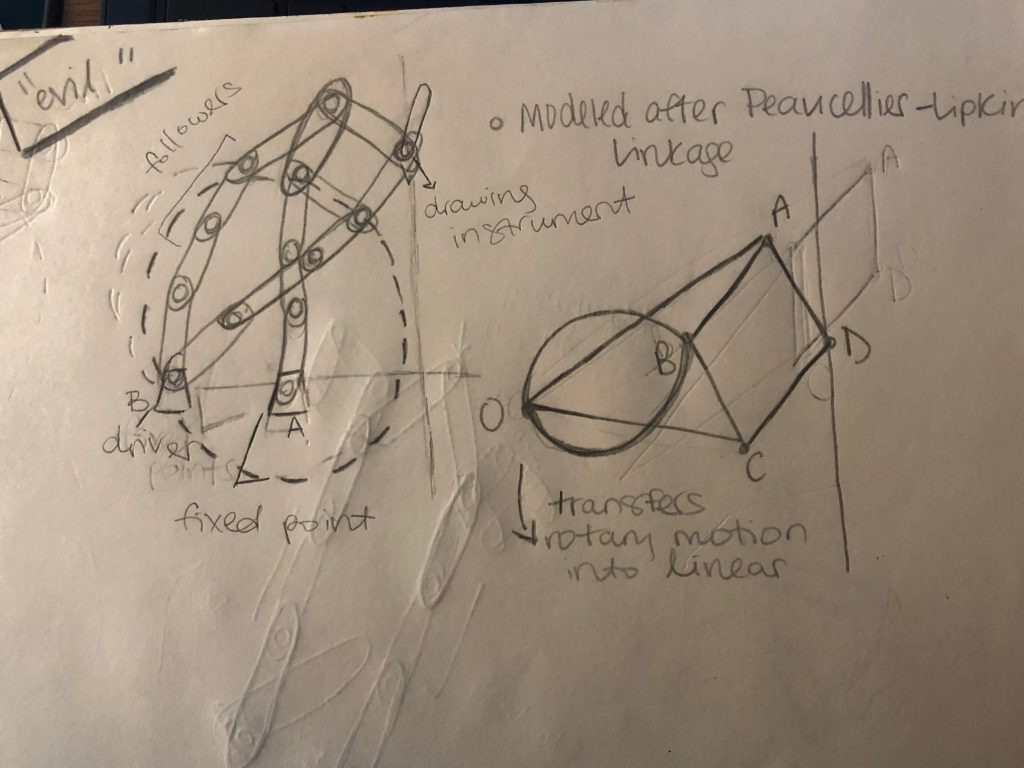 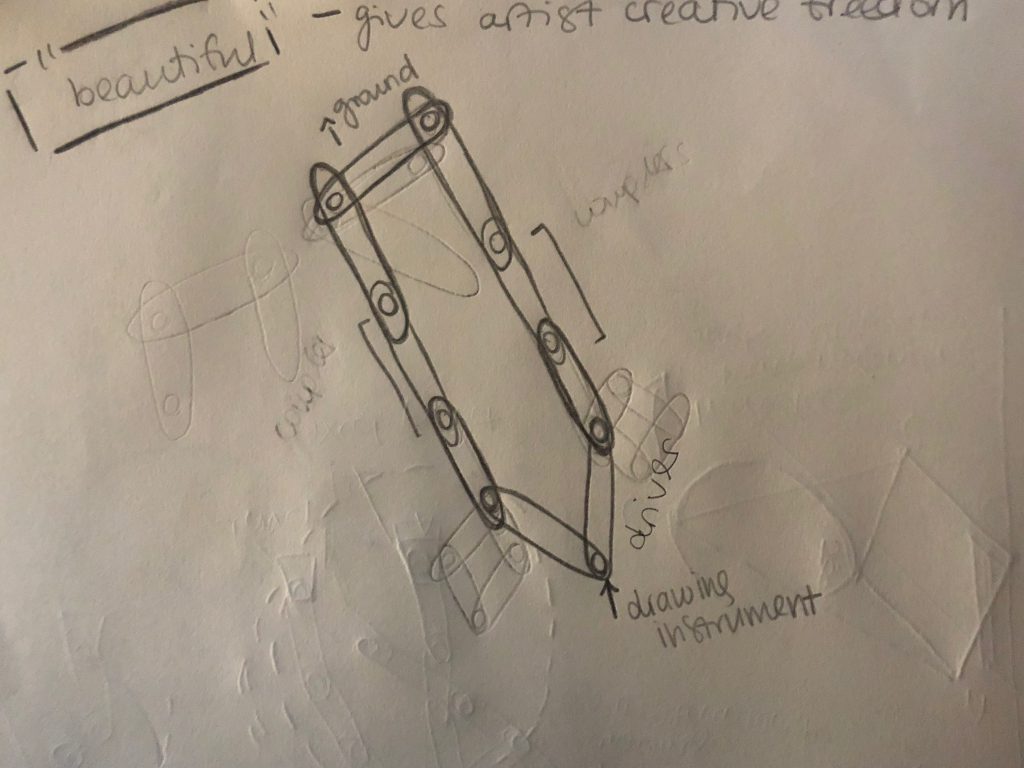 I did feel the need to familiarize myself with the technology of analog mechanisms after our pure experimentation with it. My method of research required a process of weeding out texts that were inaccessible and too complex for my purposes. I explored straight-line mechanisms and found a coherent presentation of linkage models by Watts, Hoekens, and others. I also worked to familiarize myself with the components of a mechanism (driver, ground, coupler, and follower) to pay more consideration to the distribution of motion and play with the amount of control I gave to my machine. I decided to develop an analog that was modeled after the Peaucellier-Lipkin linkage to transfer rotary motion into linear. I successfully linked the craft sticks in imitation of the model but failed to apply any fixed points, resulting in a mechanism that handed complete creative control over to the artist. My collaboration with linkages was never a “continuous flowing progression” but rather a series of unanticipated chunks of what felt like miscommunications between my machine and I. Out of frustration, I abandoned the Lipkin linkage and turned to the familiar scissor-lift model Adora and I developed earlier, adding another fixed point. 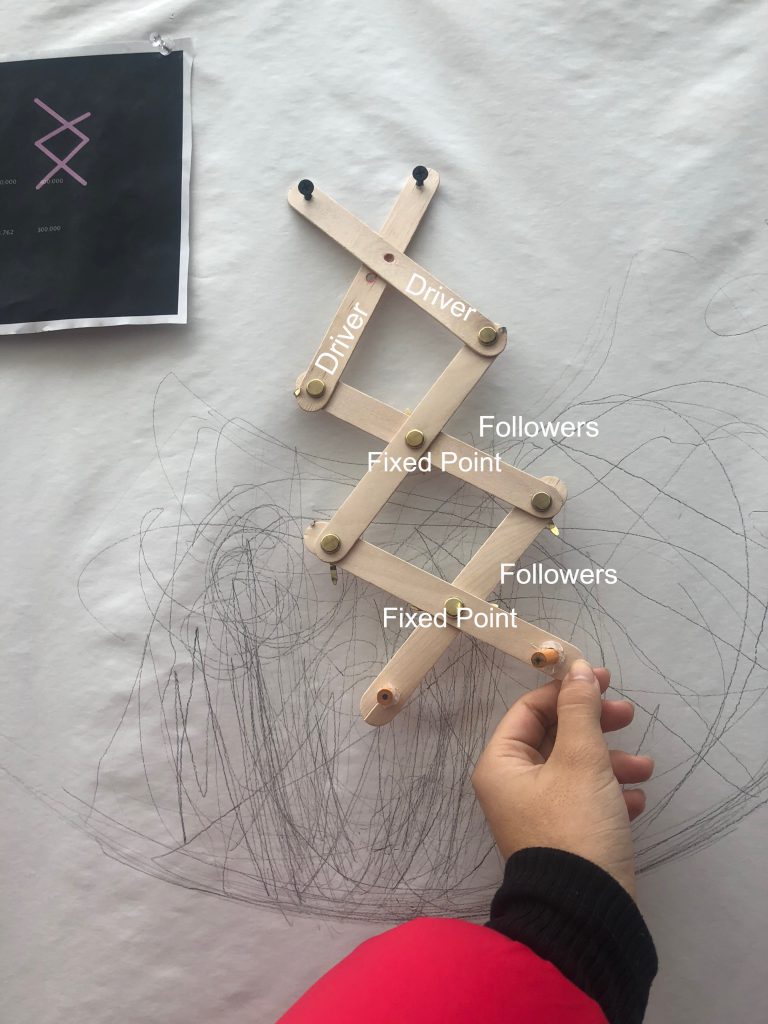 Bruno Munari’s commentary on the machine’s monstrosity and the necessity of conquering it in order to transform it into art seems radical and resembles the European conquistador spirit too much for my preferences. Neither is machine art uninspiring or lacking in meaning. As a creative entrepreneur, it was incredibly invigorating to collaborate with technology that is so unfamiliar to me. It required a level of patience and submission on my behalf that was thrilling and exciting because of the ambiguity around what the collective effort between machine and I would produce.

Translating my analog into a computational mechanism was another challenge in itself and the art of code is a territory I am just as apprehensive and enthralled about. The use of technology as a creative medium is really rewarding as a visual language that serves to transcends functionality and representation in a manner that is more regulated and standardized than most art forms. This fusion between individual expression and the mechanized world is a very modern notion and I look forward to unpacking it further as we move ahead in the class.