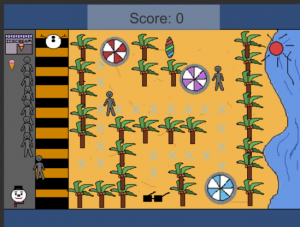 When the player successfully collect all the collectable items, the game will end with the snowman surfing in the water with everything the player had collected. 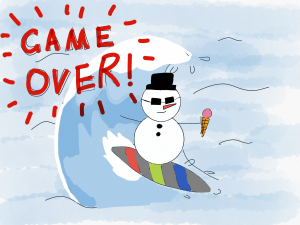 There is no obstacle item in this game which will slow down player’s action, but enemy indeed, such as people and the sun. Whenever the player encounters people or the sun, the player will die and the game will end and the gameover screen will play.

Below this the artwork of the snowman and also its body.

The body of the snowman is intended to provide further movement of the player (which is not functionable yet without game state script).

The ice cream and the snowflake are used to maintain the coolness of the snowman which prevents the snowman from melting under the sun. (The maintenance of coolness is not functionable. Instead, it is shown in increase of value due to the collection of each item.)

Sunglasses and surfboard are also necessary collectable items to achieve the final goal. The boundaries are created naturally by trees and people, two common elements on beaches in real life. According to our course discussion, zones are created by the collectable items, such as ice cream in front of the ice cream shop; sunglasses and surfboards on beach. Currently, the body of snowman does not create zones.

As part of the game design, the player has to go through struggle to achieve the final goal. In this game, struggle is created by the enemy (people and the sun). A clue that people are considered hostile is intended by the title of the game: ‘Anti-Social Snowman’. Grey and alien-ish, the agency of people in this game is intentionally in contrast to the colorful background and the representation of the player: a snowman. The player should avoid any direct contact with the enemy, which is people in this context.

This is a collection game and its structure depends on collecting items and avoiding the enemy.

However, the meaning of story is embedded in the name: ‘Anti-Social Snowman‘.’

In the beginning, there is no clear identification of the world metaphor for this game. It was only a collection game which the snowman had to collect snowflakes to play in the water. However, during the paper test on class, Giles named it anti-social snowman which gave the game more meaning. The movement of the people was. In fact, dangerous to the snowman. Therefore, the snowman would try to avoid any contact with people as much as possible. Clearly, it made the enemy/obstacle item more sense in the story level. Therefore, while trying to create realistic background, I intentionally alienated the representation of people in game. By making them hideous and uniformed, it perfectly reveal the psychology of the anti-social when confronting people in real life.