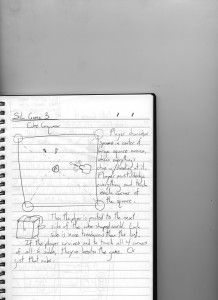 This is one of the more video-gamey ideas.  It’d play something like Geometry Wars except with no shooting, only avoiding.  You move your little character/ship/whatever around a square arena filled with things charging/shooting/generally trying to kill you. If you survive the onslaught and touch all four cubes, then that’s one side done, and you’re whisked away to the more difficult next square arena. Once you’ve captured 6 squares, you’ve captured all 6 sides of the cube, which means you’ve beaten that cube (or just that level, if it’s a longer game).