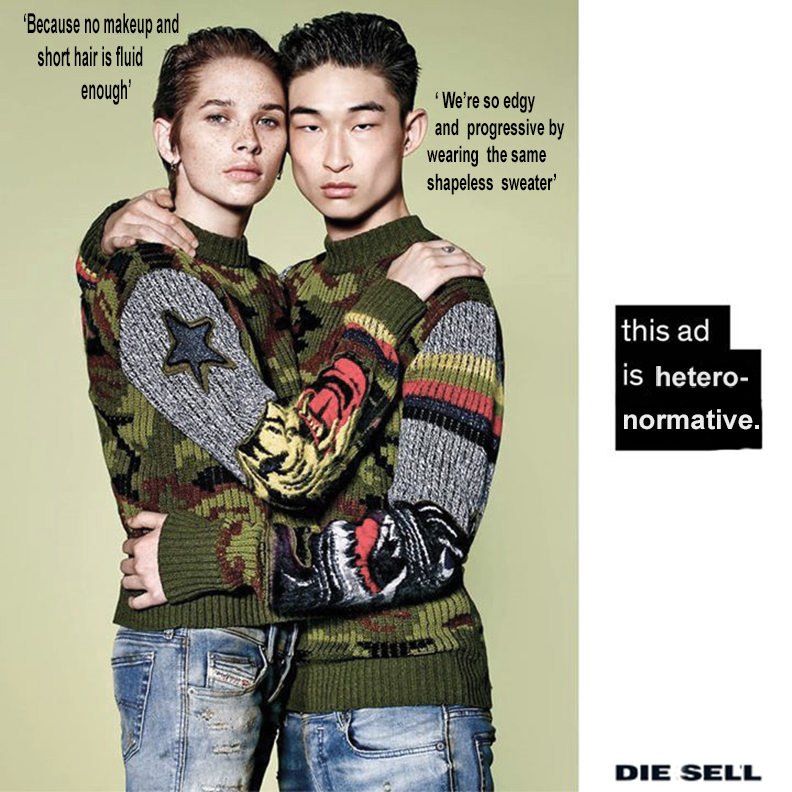 For my cultural hijack, I did a google search using the term ‘gender fluid ads’. What appeared was not surprising, but still disappointing. I mostly saw mostly tall waif models in loose-fitting clothes who only vaguely resembled the wide array of beauty and diversity that is found outside of a traditionally cis-centric society. I looked at Vogue’s issue featuring Gigi Hadid and Zayn Malik—a while back this cover received backlash for its tone-deaf address of gender expression. While I was originally going to focus on this cover, there was one ad that stood out to me the most. It was an image with two lanky individuals in baggy sweaters caressing each other while gazing soullessly into the camera. The image was intersected by a white margin and a black and white caption that read ‘this as is gender fluid’.

I kind of sat back and chuckled at the ad at first, but then I started to get frustrated. This felt no different than viewing the Vogue cover with Gigi Hadid and Zayn Malik. None of my friends, who identify as a non-cis person, really looked like the models in the ads and I, a non-passing trans man, especially felt out of place. I thought about the fact that this fashion ad made me feel like it was probably curated by a bunch of cis-gender people in a board room and not by the very community it should be upholding and representing. It is one thing to see gender fluid (non-cis) individuals in an ad or encouraging the notion that an item clothing could be worn regardless of the wearer’s gender—it’s another to have this concept funneled through the cis-lense at the expense of non-cis individuals.

My idea for my first draft came quickly. I talked to my friends cis-gender and non-cis and they shared a similar opinion on the Diesel ad. They commented on how both models were able-bodied, cis-passing, and how the ad only felt as if it grazed the surface of gender-expression and gender fluidity. I decided my caption would read ‘this ad is hetero-normative’ and that I would translate my message through text directed at each subject in the ad. I also changed the Diesel logo to ‘Diesell’ as a fun jab at the consumerist culture it is inevitably linked to.

Following critique, I felt inspired to do more research on the campaign that this ad is from. A few google searches, I learned that is ad was from a 2015 collaboration between Diesel and Tinder, a dating/hookup app. I was particularly intrigued by a few images within the series. Some that stood out were a man and a woman with ‘his’ and ‘hers’ written on their scantily clad bodies as they pose one model straddling the other. Another image showed a man stand up with shoes on his hands with the caption ‘on my wishlist’ and the sneaker emoji—this warranted an eye-roll and a stronger need to subvert this campaign. I made small edits for my original post by making the font more visible and editing the logo. I also made alternative hijacks in an attempt to make a series based on the campaign.

While people in my class laughed at my edits, the common consensus was that they strayed from my initial message and focus. This decision lead to me focusing on the one original image for my installation. The installation process started on the slower side. I installed on a Sunday, a day on campus where the printers in Heimboldt were not available for use and the library printers wouldn’t be able to print with my semi-gloss paper.  I improvised and rushed to Staples and finally Fed Ex. I was able to print my copies and rush back to Heimboldt for installation by the afternoon. The building was mostly empty making it an optimal time to install. I placed the ads by two of the Heimboldt bathrooms. It was difficult to think of a better place on campus to install that specifically focused on clothes and gender. I felt bathrooms bluntly address gender as all of us must make the quick decision on which bathroom to use as well as enforcing the binary based on the utilities offered in each gendered bathroom. I also knew that there would be a lot of people passing by or using the restrooms so my hijack would be noticed.

Both installations seemed to stay in place for a week, perhaps they still haven’t been moved. I thought about how I could have chosen bathrooms on a different floor of Heimbolt and how the impact of the image could’ve been greater. After installing this final draft I felt a wave of relief and achievement. It felt satisfying to see it up on the wall and it made me reflect on all the possibilities for more uplifting and positive expressions of gender-fluidity in advertising. This project is important to me because of my own identity as a non-passing trans man who often struggles with self-image and finding clothes that validate my ambiguity. People need to have a better understanding of how ads like the ones found on the Diesel x Tinder campaign, hurt non-cis people because they enforce a superficial aesthetic of what a non-cis person should look like in order to be digestible to the mainstream. The truth is, that non-cis people come in all shapes, sizes, colors, backgrounds, points of transition (or lack of ), and don’t fit the narrative of artificially curated by cis-people based on their limited perception of non-cis individuals. Non-cis people should be represented by their unlimited diversity and rich experience something no one can manifest in a board-room. Seeing more non-cis diversity will enable the mainstream to better understand the actual cultural significance of gender expression and the true meaning of gender-fluidity. Overall, this was an interesting process to go through and one that made me more conscious of how heteronormative culture manifests itself in “edgy” collaborations concerning sexuality, gender, and gender expression. 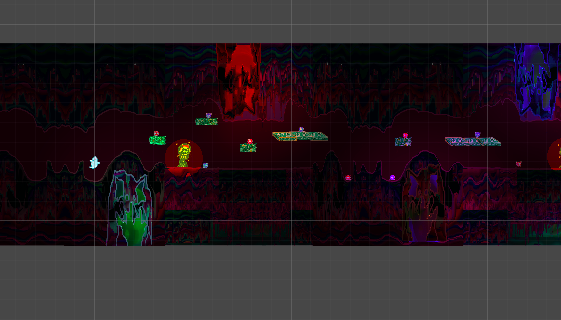 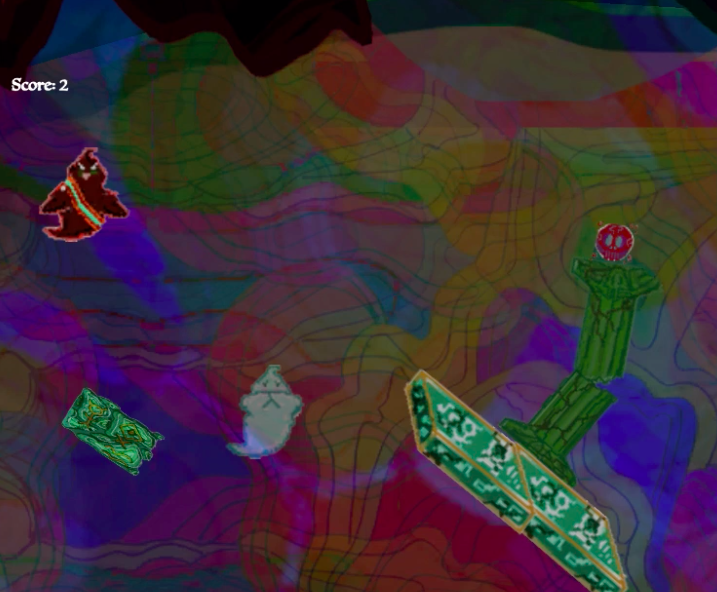 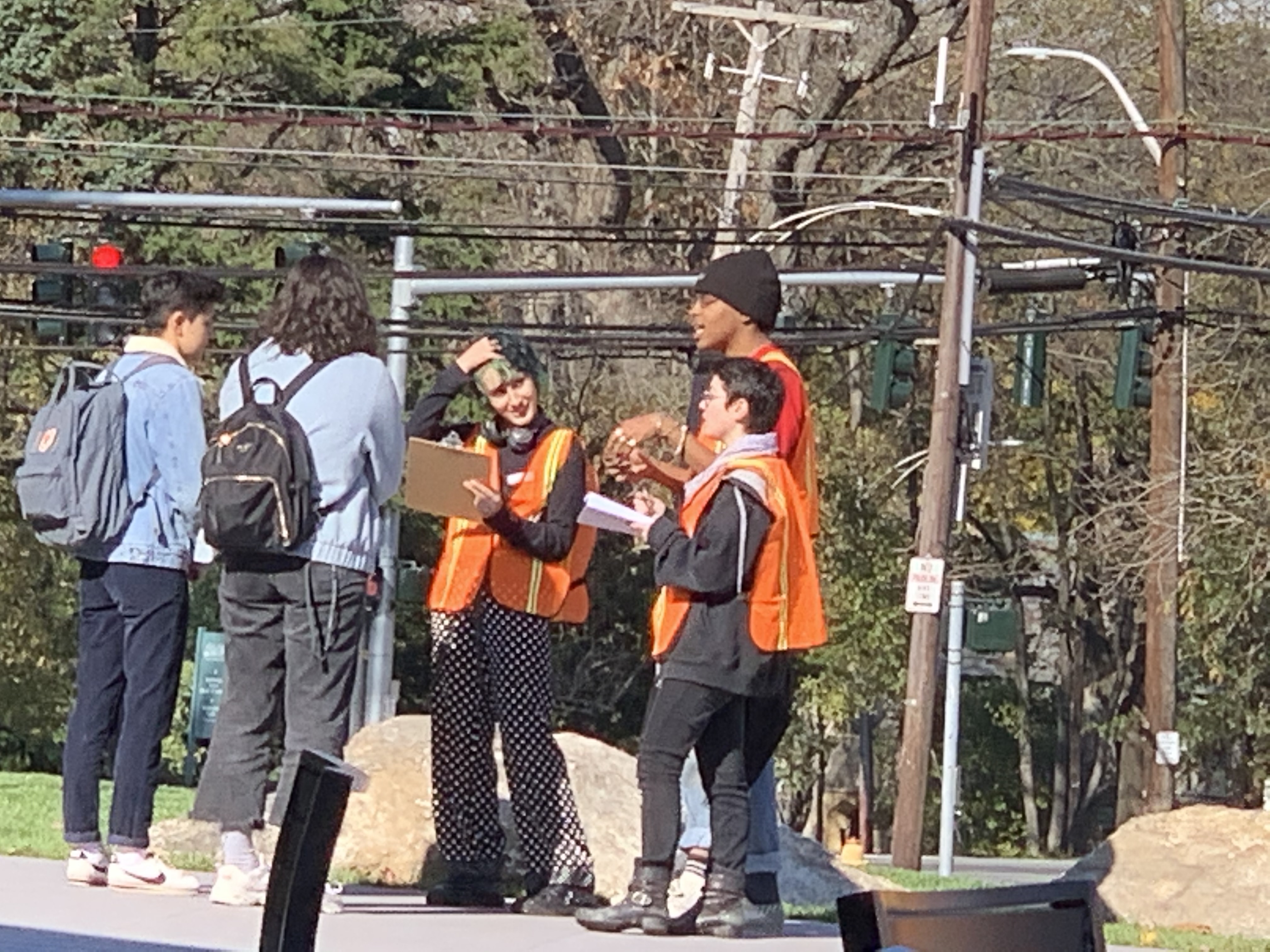