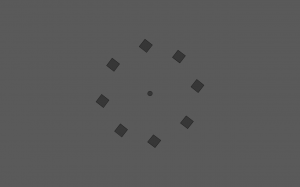 For my third Black and White game I opted to create a Ferris wheel type structure. As we had just learned transforms I simply modified the existing code to arrange the box like structures in a radial pattern around a central focal point. The Ferris wheel then appeared to rotate around a centered axis, its motion, clockwise or counter-clockwise was dictated by the x position of the mouse. If it was to the right of the screen then it would turn in a clockwise fashion, the left would result in a counter-clockwise movement.  it is a very simple implementation in black and white of transforms for an amusement park type ride.