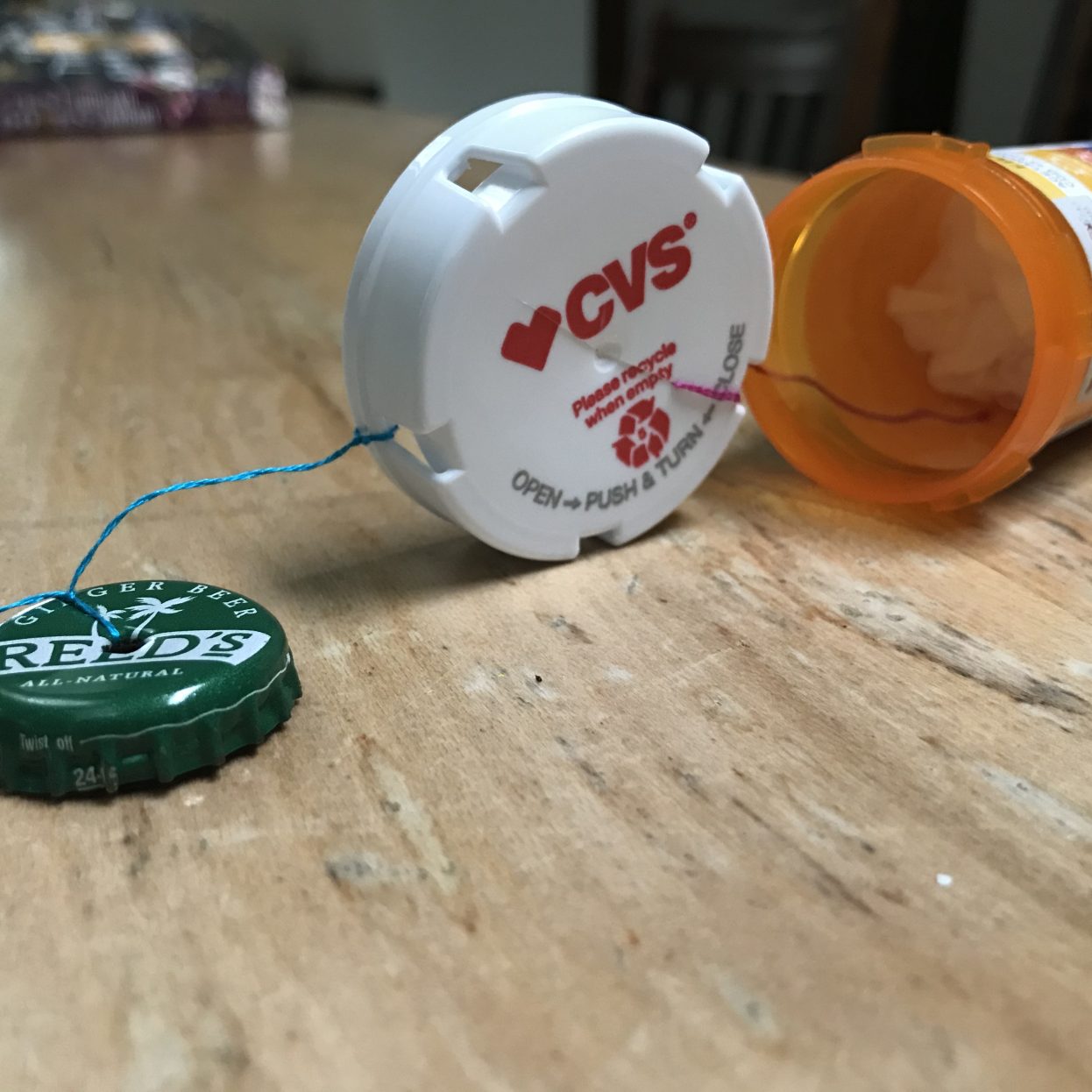 This creation was inspired by the habit of compulsive eating, which is an aspect of my experience with OCD. One of the first questions asked in the class was “What are you obsessed with?”, so obsessive compulsive disorder seemed like a good place to start. Compulsive behavior of any sort is brought on as a temporary remedy to something that is causing severe, uncalled-for anxiety (aka obsessions). What separates compulsions from legitimate solutions is that they are only subjectively logical and can be anywhere from inconvenient to unhealthy to dangerous.

The subjective logic, though, is what keeps compulsions going–this is why I chose an empty opioid pill bottle as the cause-piece of this project. I was drawn to this piece of trash because it embodied something that I’d used responsibly, only taking the prescribed pain medication when necessary. Around this time, it was far more difficult for me to be responsible with how many ginger beers I was downing, persuading myself that I had a slight stomachache or that it was too hot out to drink plain old water when I really just needed an entire bottle of soda to ground myself. (Needless to say, it’s been a strange couple of months.) Of course, misuse of ginger beer is far from as dangerous as misuse of codeine, but with this piece, I aimed to create something unexpected that showed how I plowed through a bottle different from the one you’d expect–in fact, many of them.

I used a prescription bottle as the container, since that’s what people expect when considering the intense desire for a certain substance, and bottle caps as the pills falling out, since they represent empty or spilled bottles, gone too soon and too rapidly. The cap at the bottom of the piece is from a bottle of cherry juice, which I sometimes drink a little bit of before bed because it helps the brain to fall and stay asleep. All of the trash in this piece was gathered over the span of one week, meaning that that’s when I finished everything off. In this case, objects “at-hand” came to use very immediately, just like some of their contents had. This piece was originally intended to be part of a larger whole, but as I changed my direction with my large project, I found that the pill bottle and its spilling contents can stand alone.

I drew inspiration in terms of structure from Cecilia Vicuña and Sarah Sze, both of whom use dangling objects in their work. When working on one project, Sze asked herself how she wanted the dangling objects to interact with the elements–would they sway in the wind? How hard? How often? How much of the wind would be real, and how much of it would be made by a fan out of frame? I decided that I wanted this piece to have the potential for motion since it’s in a spilling position, plus it’s meant to be held in its current form; however, this piece can also exist on a flat surface as if the spilling has already happened, so it’s entirely up to what the viewer sees within and wants out of it.

Overall, my experience working on this project was pretty straightforward: I knew what I wanted the simple structure to look like from the beginning, so I went and made it. I’m proud to say that this piece was made (almost) entirely with trash materials, the only exception being the clean tissue (wadded up inside the bottle to represent empty consumption). In my defense, though, tissues are made explicitly to become trash. They are not used to advertise or appeal to the eye, but to be sullied and promptly discarded. There’s little other thought that goes into the individual tissue. Aside from that, the only non-trash material is the tape used to connect the cap chain and bottle, but hey, none of us can be gods.

It was very validating to make a project on my experiences with control and lack thereof all with the prompt of garbage, because that’s where all empty vessels end up, ultimately, no matter what was in them.

Art from Trash: You Get What You Pay For